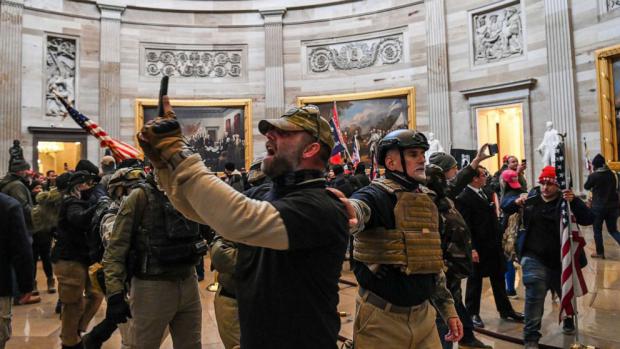 For the first time in at least a decade, a jury is set to deliberate federal seditious conspiracy charges, weighing the government's case against members of the far-right Oath Keepers organization who prosecutors say plotted to oppose the peaceful transfer of power by force in the lead-up to the attack on the U.S. Capitol on Jan. 6.

Oath Keepers founder Elmer Stewart Rhodes III is facing trial alongside four other defendants: Jessica Watkins, Kelly Meggs, Kenneth Harrelson and Thomas Caldwell. Watkins, Meggs and Harrelson went inside the Capitol during the attack, while Rhodes and Caldwell were present on restricted Capitol grounds on Jan. 6. Rhodes repeatedly tried to get in touch with former President Donald Trump, even after the Jan. 6 attack, encouraging Trump to invoke the Insurrection Act and call upon the Oath Keepers to help keep him in the White House despite his election loss.

After hearing from the government last week and from the defendants' attorneys on Friday and Monday, federal prosecutors got the last word during rebuttal before the case went to the jury late Monday.

"They took matters out of the hands of the people, and put rifles into their own hands," Assistant U.S. Attorney Jeffrey Nestler told jurors. "They claimed to wrap themselves in the Constitution. They trampled it instead. They claimed to be saving the Republic, but they fractured it instead."

The defendants should be held accountable for "agreeing to commit sedition against the government of the United States of America," Nestler said.