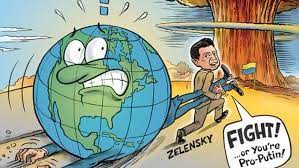 But there was a problem. The missile was fired from Ukraine – likely an accident in the fog of war. Was it actually a Russian missile, of course, that might mean World War III. But Zelensky didn't seem to be bothered by the prospect of the world blown up, judging from his reckless rhetoric.

When US National Security Advisor Jake Sullivan finally returned Zelensky's call, he is reported to have said, "tread carefully" on claims Russia was behind the missiles landing in Poland. The Biden Administration went on to publicly dispute Zelensky's continued insistence that Russia shot missiles into NATO-Member Poland. After two days of Washington opposition to his claims, Zelensky finally, sort of, backed down.

Zelensky Trapped by Moscow and Washington

For As Long As it Takes