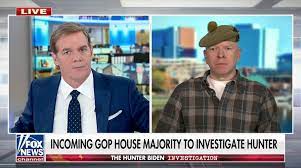 Mac Isaac alleged in a Monday interview with Fox News that an FBI agent gave him a "chilling" warning when he first interacted with the bureau after finding the laptop. The Delaware-based laptop repairman said he recalled telling one agent that he would change their names when he published his book.

"That's when Agent Mike turned around and told me that, in their experience, nothing ever happens to people that don't talk about these things," Mac Isaac said, claiming that it was a veiled threat to keep silent.

"I have been dealing with retaliation from multiple fronts for the past two years when what I did was leaked to the country. I'm expecting it, and I'm going to expect it to continue," he added to Fox News while promoting his book.

Republicans, he said, should hold "the FBI accountable for colluding with our mainstream and social media to block a story, a real story with real consequence," and they should "get to the bottom of what the Biden family was up to when Joe Biden was vice president."

Russian billionaire, 53, is killed in helicopter crash near Monaco in latest crypto mystery...

Died Suddenly – the groundbreaking investigations that made the film possible

Florida Governor Ron DeSantis Capitulates to Disney, Works to Give Them Back Their Special Tax..