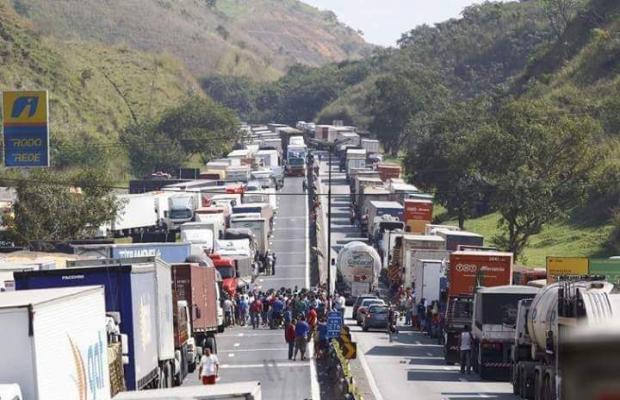 Brazilian Truckers are blockading roads and ports while a Federal Judge had to step down for allegedly discussing a military coup with President Jair Bolsonaro.

The head of Bolsonaro-allied Liberal Party will announce the next steps today.

Brazilian truck drivers have blockaded at least 17 roads since Friday, Turkish A News reports. Between Oct. 30 and Nov. 9, authorities arrested 49 people allegedly involved in the roadblocks, according to Brazilian news portal G1.

In a voice message published by columnist Mônica Bergamo, Judge Augusto Nardes of the Federal Court of Accounts (TCU) allegedly was discussing a military coup with President Jair Bolsonaro. In the recording, Nardes said he has "a lot of information" about "strong movement in the (Army) barracks". Nardes allegedly said "that (there will be) a very strong outcome in the nation, unpredictable … in a matter of hours, days, at most, a week, two, maybe less."

Apparently someone forwarded a WhatsApp message from the Judge to the journalist. The call was interpreted as referring to potential preparation of a military coup to prevent the inauguration of convicted Communist criminal Luiz Inácio Lula da Silva as President in January. Judge Augusto Nardes has announced his resignation over the call.

The head of Bolsonaro-allied Liberal Party (PL) Valdemar da Costa Neto will hold a press conference today at 4 pm Eastern to propose a review of all ballots used in this year's election. A study by the Instituto Voto Legal concluded that it was impossible to " validate the results generated in all electronic voting machines of models 2009, 2010, 2011, 2013 and 2015″ .

"We don't want new elections, we are not going to propose that, we don't want to disturb the life of the country", Costa Neto said. "But there are some electronic voting machines that have to be reviewed and we are going to propose this to the Superior Electoral Court next Tuesday (…) From the study we did, there are several ballot boxes that cannot be considered valid. It's all over Brazil, from 2020 onwards. They all have the same number of ballots. There's no way to validate this. We have the proof and we are going to show that these ballot boxes cannot be considered. Let's see what the TSE will solve." According to Costa Neto, approximately 250,000 electronic voting machines had problems.