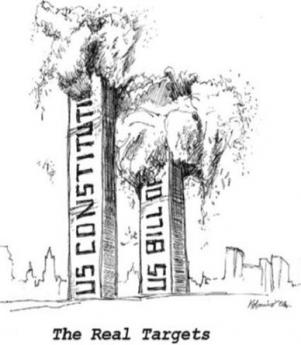 Brief introductory material, and then we switch to the floor speech.

This is one courageous lady and the man on the hunger strike deserves all of our attention. There is something fishy about this whole 9/11 thing, and there has to be some investigation and justice, or America is dead!

I came down to the Arizona Senate to listen to the presentation of Senator Johnson regarding the inconsistencies of official explanation of 911 Yesterday. This is the first time I have ever taken the time to visit the Arizona State Senate in the 30 Years I have lived in Arizona. I would like to commend Senator Johnson courage to being one of the first, if not the first State Legislator to openly and on the record to DEMAND a full Re- Investigation of 911. The official story is patently FALSE! Senator Johnson your speech was direct and to the point. Yet while I was in the Gallery, I saw other legislators bored or text messaging others during what could be the most important speech EVER DELIVERED to this governing body. I witnessed first hand how some of the senators not even opening the information that Senator Johnson took hours in preparation to present. I am shock and enraged at the behavior of these "elected officials" to act so apathetic to the event that has turned our country that WAS the light of freedom in the world, to the country despised as an AGGRESSOR of WAR and through the "patriot act" has turned our RIGHTS into DUST. I am honored to know that an ARIZONA legislator had the courage to speak up about the inconsistencies in the "official" explanation of the greatest attack on American soil. The Arizona Senate needs to immediately further this investigation and compel our State Senator to the federal Government and presumed presidential candidate to meet with Senators Johnson and Blair Gatsby to acknowledge the inconsistencies with the official explanation to bring the CRIMINALS who intervened with this cover-up to justice.

View the video for yourself
http://www.freedomsphoenix.com/Find-Freedom.htm?At=034375

Is This All Being Engineered To Create Chaos?

U.S. Field Hospitals Stand Down, Most Without Treating Any COVID-19 Patients

McGovern: Turn Out The Lights, Russiagate Is Over

QAnon Followers Think JFK Jr. Is Coming Back on the 4th of July

Can't Make This Up: Beijing Begins Construction Of A P-3 Biolab

Contact Tracing Group Funded By George Soros and Bill Gates, Chelsea Clinton on Board of Trustees

Conspiracy Theorists Get Your Note Pads Out Before You Watch This...

A Book Review of Virus Mania: How the Medical Industry Continually Invents Epidemics...