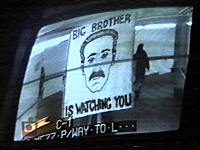 The latest Big Brother police state measure emanating from the Bush administration, with virtually no press coverage, is entitled Biometrics for Identification and Screening to Enhance National Security. NSPD is directed against US citizens.

1 Comments in Response to Presidential Directive: "Biometrics for Identification and Screening to Enhance National Securi

The machinations of the Elite are beginning to show more clearly. The elite's ultimate goal is to create a microchipped population. The Elite is able to advance its control over mankind because it is watching the entire world population.

Electronic surveillance of the population has long since ceased being a theory. Ever since the 9/11 attacks civilians have become more aware of such invasive surveillances. Full body scans at airports and cameras in the streets; today have become normal occurrences. We are now in the trial stage of the Elite. They have super computers and satellites that monitor all human activity on a rotating twenty-four seven-day basis . The technology of satellite cameras is so far advanced that even from space they can distinguish minute and specific details as the brand of softball being played at a park, to the make of a car. This technology was already in use in 1956. With a very sophisticated camera, the famous high altitude reconnaisance U.S. aircraft U-2 could look down from an altitude of 8 miles and read and photograph the headlines of a newspaper.
Global Positioning System (GPS) uses twenty-four satellites for orientation on and above the earth. These satellites are also used to monitor telephone traffic and computer communication. Because of the built-in computer chips in passports, credit cards and identity cards, anyone can be followed and monitored anywhere in the world. It won't be long before there is no place left to hide. For years we have been told that the chip only ensures our safety and that it's primarily meant to fight terrorism, causing good and cautionary civilians to let down their guard. But who decides who qualifies as a terrorist? These chips contain our detailed personal information, making us a global community that's completely under surveillance. This type of State control by far exceeds the visions of George Orwell!

Soon, the first step toward total control of civilians will be taken. It won't be long before we shall witness a world void of cash money, causing the current money and banking system to loose its validity. Not long from now an electronic chip card will make cash transactions obsolete. We are already being exposed to the high costs of monetary flow within the European Union (in 2006 a staggering fifty billion euros). In the near future we will be prepared for the 'Single Euro Payments Area' (SEPA). This will lead to the gradual disappearance of all national currencies such as bank and credit cards and, starting in 2008 the introduction of a 'Universal Biometrics Card', which will be used similarly in all member states .
However, the Universal Biometrics Card, which will contain all of our personal data, will not survive for a long period of time but will merely function as an intermediary stage for its successor, which has been awaiting its turn since the seventies.
The Card will, of course, cause problems. One of those problems is what to do when the card is lost, damaged or stolen. There will be nothing one can do, as there will no longer be another tender.

Our leaders will continue to first cause trouble, and then offer solutions which befit their aspired goal: a complete control and marking of each individual civilian by means of a microchip! This microchip is a minute plate that contains a unique identification number that will be linked to an external database containing additional information about the host of the chip in question.

The microchip, developed by our leaders, will be implanted beneath the skin. Because the chip will charge itself from fluctuations in the human body temperature, the forehead, just below the hairline is the best spot to implant. The microchip is invisible to the naked eye and stores all information important to our leaders. Infrared sensors that can read the chip will be placed everywhere.

The already existing super computers have been programmed to process the chip's information. The microchips will be read worldwide at the mere command of a sensor twenty-four hours a day via satellites, making it easy to thus locate the position of every world citizen. Already the microchip is being put to the test in many places in the world: in the Malaysian capital Singapore, tens of thousands of people have tested the chip! In Mexico the National Migration Institute has said it will introduce electronic registration for foreigners entering the country through the southern border to curb illegal immigration. In a communique, the institute said Biochip implants would be used to control the entry of workers and visitors from Belize and Guatemala from March 2008.

In the Netherlands the Christian Union stated in a memo published on 20 May 2005 about the microchip; that the government can never obligate a civilian to have such a chip implanted. The memo also discusses the possible dangers of the technological developments around the identification techniques. According to the Union there should be a law in which is stipulated that no Dutch person may be forced to have a chip implanted. Nevertheless, Holland will be the first country where the chip will be formerly introduced . Governments will give us plenty arguments as to why it is of great importance for everyone to be implanted with this chip. The ultimate goal will be that every newborn will be chipped automatically following birth. Anyone who refuses the chip will be cast aside socially, politically, religiously and financially; he or she will no longer have access to the electronic banking system and will therefore no longer be able to buy or sell. The chip will enable its installers total surveillance control of world citizens!

Weekly Update --- Listen to the Doctors, End the Lockdowns by Ron Paul

This Is Not a Revolution. It's a Blueprint for Locking Down the Nation

The Face Mask: A Powerful Symbol of COVID Oppression

"We Will Keep People Home By Law, If Necessary" - UK Unveils New...

The Drones Were Ready for This Moment

How Governments Are Hunting the Infected

Covid Internment Camps Being Set Up In Washington!

Test Positive For COVID-19, End Up In A Police Database

A Brave New Normal, Part 2 - A "Cranky" CJ Hopkins Has A Theory