The Straw Poll in Scottsdale Arizona on 1/8/08 was WON by Ron Paul won with 80% of the vote!  Now how can Ron Paul win almost every single Straw poll and yet the “real” election comes around and we do do as well as we would have liked?  Here is the reason very simple:  ALL THE SUPPORT OF ALL THE OTHER CANDIDATES IS ALL MANUFACTURED!   Ron Paul’s supporters are willing to do whatever it takes to make our dream, the one of FREEDOM come true with Ron Paul leading the way.  All the other supporters really don’t care who wins really.  This is why we can win, we are committed to success.  In any endeavor, I would rather have 1 person that is committed, than 1000 who are interested.

Folks are you mad because Ron Paul didn’t do as well in the polls as we would have liked?  Are you angry that FOX and company didn’t invite him to their freaking orchestrated “Wrestling Match” I mean forum?  Are you seething that all the other candidates laughed at Ron Paul at the ABC forum?  Are you pissed off that the media ignores Ron Paul and the message that he brings?  I am so excited that you have all these feelings of fear, doubt and worry, I am going to will tell you why.

What we all need to do is take all that emotion, all that energy that comes from being upset and channel it into more effort for Ron Paul.  Did we think the establishment was going to just roll over?  They like being in charge and aren’t going to roll over.  We need to make Every Single Opportunity count.  It like we say in the car business Opportunity to Do Business (ODB).

Do you have your Ron Paul toolbar loaded on your computer?  Every time you search you help Ron Paul.  Bring Ron Paul stuff with you every where.  Going out of the house?  Do you have your Ron Paul Button on?  At the gas station and you are filling up your car?  Pass out fliers and talk to people.  Going out to dinner?  Tell the server that Ron Paul will eliminate taxes for tipped professionals.  Make sure that people are signed up in Meetup.com when you find someone who is excited about Ron Paul.  This is super critical as this way they can get involved just like you are.

Stuck in traffic?  Roll down you window, get out your Ron Paul sign and wave it around.  I look forward to being in traffic!  Is there a sporting event in your city designed to distract the masses?  Grab a sign and wave it, you don’t need to have a group to help you.  What I have been finding is when I do this, I bring extra signs and recruit someone passing by to help me!  People are interested in Ron Paul!  Keep extra signs and zip ties in your car all the time so when you see that perfect piece of chain link you stop and put it up.

Engage in conversation with supporters from other parties.  They aren’t as nice as us and frequently they don’t want to discuss their ideals, talk to them anyway.  If they are democrats ask them why congress didn’t impeach George bush after they came into power?  That gets them fired up right away and they think of you as not the enemy.  I like asking them why they like their candidate and have them explain their position, first.  If you have time get them to talk as much as you can, because then it give you all the ammo you need to convert them to a Ron Paul supporter.  Most people are really Ron Paul supporters they just don’t know it because they haven’t unplugged yet from the LSM.  I like to mimic Ron Paul and his style of non aggression as when people feel you are non aggressive they lower their guard and it make them EASY to sell.

"Whatever you vividly imagine, ardently desire, sincerely believe, and enthusiastically act upon must inevitably come to pass."

This is a marathon and I know Ron Paul can go the distance.  The question is can you?

Thomas of the family Costanzo 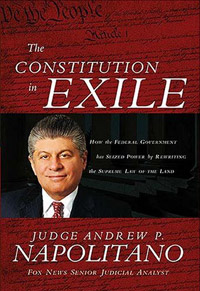 This should be mandatory viewing for every free thinking American.

Subject: Judge Andrew Napolitano is among the fiercest defenders of individual rights

Judge Andrew Napolitano is among the fiercest defenders of individual rights. Both in his daily appearances on the country's most-watched cable news network (Fox) and in a series of books (most recently, A Nation of Sheep), Napolitano consistently and defiantly argues that the only legitimate government is that which respects its citizens rights in all cases.

In late October, Napolitano gave the keynote address at the conference Reason in DC, where he delivered a spellbinding speech that blended a masterful understanding of American history with a blazing outrage at the excesses of the new security state. "Who [is] the greatest violator of the Constitution?" asks Napolitano. "George W. Bush has shown less fidelity to the Constitution than any president since Abraham Lincoln."

You mean the organizers didn't make you wait an hour or so out in the hallway, realize the vote wouldn't go their way, cancel the poll and not refund you money? Crap didn't they get the memo? What? They wanted your money instead?