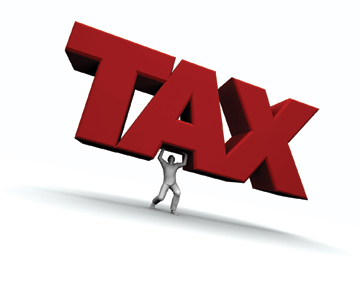 Dear Senators Kyl and McCain and Congresswoman Kirkpatrick:
Yesterday I did my taxes for the year 2008. My wife and I both work and make an average middle class income living paycheck to paycheck. Together, my wife and I paid about $5700 for federal income taxes. We are getting a whopping $870 back. Which means you, the federal government, are keeping $4,800 of our money. My question to each of you is; WHY? Why should I be sending any of our hard earned money to Washington? You simply take it and give it to AIG, GM, Chrysler, Ford, the Banksters,Wallstreet CEOs, who then use it for their personal bonuses, not to mention the nice little raises the three of you received this year.
My son is going to college and works on the side. His wife was working to help put him through school. She had their first child in December, and while she was on maternity leave she was laid off. Now they need our help and I am out of money. Do you realize or have any clue whatsoever how much we need our money that you are taking from us? That $4800 could be put to great use paying our bills and helping our children. The three of you always claim, in your campaigns, to be champions of the people. Well, are you or aren't you?
Regardless, I am asking for my money back. Yes, that's right, I want you to make sure my money is sent back to me. I am not asking for a grant, or for you to take money that belongs to my neighbors and then give it to me, and I am not asking for a multi-billion dollar bailout. All I want is my money returned. And I want it just as fast as the first bailout was passed and delivered to some of the aforementioned companies. If you can do it for them you can do it for me.
By the way, I work for a car dealership in Safford, and the bailout money to the banks and the CEOs of the big automakers has not improved a thing.! The next time you want to help America, start with mainstreet not Wallstreet.
I look forward to hearing from you.
Sincerely,
Richard Mack
105 19th Place
Safford, Az 85546
928 428 8160-H
928 428 7150-W

6 Comments in Response to Dear Senators Kyl and McCain and Congresswoman Kirkpatrick:

Please tell me who I voted for then. However, I think the first comment was correct, I am a D.A.
because I keep sending my money to the crooks in DC not because I may or may not have voted. But I sure appreciate your poignant and professional input. Perhaps more on point though, would you not be curious to hear the responses to my request from the three DC protectors?

You should have voted for "Ron Paul'...dumb ass!

My office was happy to receive your letter. I too am deeply concerned about the personal economic situation of my constituents. That is why I have voted for President Obama's brilliant bailout plan, HR1, which was so superb it needed no debate in Congress, and I will continue to support any further stimulating of the economy my leaders inform me is necessary.

Thank you so much for the $4,800. It just barely covered my raise. As a Congresswoman as you can imagine, I have a lot of haircare needs .

We send our money to Washington because we are stupid. And our government wants us to stay that way so that they can pay off all the of the people that got them elected. It is just that simple!
The problem is that people are getting smarter and things like the Federal Reserve Bank is a privately owned for profit corporation mostly owned by forigeners. And we would not have to be paying federal income tax if it did not exist. It has created an infinite debt that the tax payers have to pay. The culture of greed and corruption in Washington has to end.

I must admit this question has been going through my head of late, I suppose triggered by the never ending Congressional/ Executive expenditures to subsidize criminal private and quasi-private investments gone bad, and the receipt of tax forms in the mail.

Insane: US taxpayers are now picking up the salary tab for Ukraine's corrupt government

Only Twice As High!