Lew Rockwell noted a pearl of wisdom from CNBC yesterday that surely outlines the way to be a good American.  “Being long gold is being short America.”  I'm certain that being short America is unpatriotic, so obviously any patriotic American will take off their gold position and go long America.

The Short America Play
To go long America, we should probably examine what makes gold an anti-American play.  Gold is a metal, not much different than silver, rhodium, platinum, copper, et al, so it's a fair assumption that any metal play would be just as anti-American as gold.  Gold, like other metals, is a commodity.  Are other commodities anti-American?

I'm told that oil speculation is anti-American.  Timber is definitely anti-American; what timber doesn't come from Canada depletes US forests.  Corn?  It's subsidized, so it must be American, but corn speculation would drive up ethanol producer costs, so maybe un-American?  Wheat?  A lot of the world market comes from Russia, so that can't be an American play.  Sugar?  Brazil.  Steel?  American steel, maybe, but we already ruled out metals.

To be on the safe side, we better just consider all commodities un-American.  Unless you are a US manufacturer, then, I suppose, buying commodities would be OK.

Unfortunately, all commodities would include US dollars.  Is holding dollars a short America play?  My gut tells me, “no,” but mainstream economists, so-called, tell me, “yes.”  They call it the paradox of thrift; saving, a private virtue, is a public vice.  I should think that public vices are clearly un-American, so holding dollars is out.

This is reinforced by the excoriating rhetoric leveled recently at banks that are “padding their balance sheets” and not making loans to Americans.  “Hoarding” is the operative word.  In fact, don't you see, hoarding is the key to the whole “long gold is short America” hypothesis. 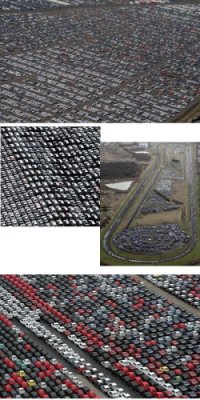 But, what of the manufactured goods?  Is hoarding manufactured goods being short America?  Certainly, intermediate and finished goods are sufficiently like commodities to qualify.  If a manufacturer is holding extraordinary inventories they are short America just as surely as someone who is long gold.  It would seem that, to be consistent, the CNBC commentator must include US auto manufacturers in the list of unpatriotic individuals.


So, a patriotic, long America play would be one that is bullish.  I think I'm safe in assuming that's bullish on US markets, and, since buying commodities is unpatriotic, equities markets.  But, there are pitfalls in that, too, that throwing darts at the stock pages can't avoid.

As it turns out, we can ignore the first two questions, because the third throws us into an infinite loop.  If we follow the government's lead, we end up investing in banks and auto manufacturers, both of which are anti-American if the CNBC commentator is to be believed and logically extended.  However, if we pick any other stocks, we're providing capital to companies competing with “America's investment” for scarce resources.  Competing with America is most decidedly un-American.

Beating the Bears at their own Game
Ironically, the real long America trade has been given to us by two well-known investors who are vociferously bearish on the US.  Both of them have been called anti-American and unpatriotic lately, but they may have inadvertently revealed the sensitive plans of our enemies and, thus, enabled a counter-strike.

Peter Schiff and Jim Rogers, both speaking to our anti-American allies in Saudia Arabia, outlined plans to bring America to its knees.  Schiff told a group of finance majors that, if the Sauds really want to destroy America, they should snap up available shares of mining companies and thus gain control of gold reserves left in the ground.  Rogers recommended they remove their peg from the US dollar and establish a gold standard.

I'm reminded of the scene in Patton where George C. Scott, playing George S. Patton (American) decried, “Rommel [un-American], you magnificent son of a bitch, I read your book!”  If America is vulnerable to such anti-American attacks as going long gold and gold stocks, a preemptive strike must be launched immediately.

It is quite clear that any patriotic American who believes at all in defending the homeland must immediately establish large long positions in gold and gold mining stocks.  They may take us down, but we can make them pay dearly for it (in US dollars, of course).

Contradictions Be Damned
To recap, buying gold (or any other commodity) is un-American.  Not buying gold is also un-American. Holding dollars is un-American, but so is investing.  Manufacturing?  American as apple pie, but only if you sell what you manufacture to people of dubious American-ness who would otherwise hoard their dollars.  In short, whatever you do with the proceeds of your labor is unpatriotic and anti-American, so do something else.

You may be tempted to conclude that saving, investing, and consuming as a form of nationalism is too contradictory to be meaningful.  That, sir, is a dangerous thought, and definitively marks you as un-American.

I hope your cot in the work camp is made in China.