Join-Us | Log-In
Freedom Forum | Translate
By Greg Dixon
It was in the summer of 1999 that Carolyn Fankhanel of St. Petersburg, Florida, Conservative writer and Publisher of the Grass Roots Journal received a strange invitation in the mail to attend a seminar to be held in Nashville, Tennessee August 16 – 20 of the International Association of Undercover Officers, a private nonprofit organization.  The subject: “Homegrown Extremists.” Seminar host: Gene Rightmyer, a retired ATF agent who had been forced into retirement because he had thrown a drunken, racist party for 16 straight years according to a Senate Investigation Hearing.  We will return to his drunken parties in a later article.
Carolyn sent in her application with a registration fee, was accepted, and showed up on the 16th with her note pad and tape recorder, which was later disallowed.  Rightmyer was the main instructor at the “Homegrown Extremist Intelligence Conference,” which charged $500 tuition per person for the week.  The undercover cops’ fees were paid by their employers which included ATF, DEA, FBI, Tennessee Bureau of Investigation (TBI), Special Military Security Forces, US Army Space Command, Defense Distribution Center (DDC-AS), Defense Logistic Command Security Office, The Tennessee State Guard, criminal district prosecuting attorneys and investigators’ offices, county, city and state sheriffs and police offices, and Tennessee Law Enforcement Training Academy.  The class roster identified agents from Tennessee, Florida, Georgia, Oklahoma, Ohio, Pennsylvania, Colorado, Maryland, Illinois, Texas, Arkansas, Kentucky, Louisiana, Virginia and Washington D.C.
Carolyn’s notes for Day One - Dr. Karl A. Seger, Ph.D., a clinical psychologist and security consultant was the speaker.  He divided the U.S. into three groups of Extremists.  First – Left Wing (socialists & communists – pinko bedwetters).  Second – Right Wingers – “All share the same philosophy (KKK, Neo-Nazis). Third – Government Employees.  Everyone in the U.S. falls into one of these categories.  Take your pick.  The right wingers are definitely dumber than the left. More professionals on the left.  Left are more ideological.  The right believes that they are on a mission for God.  Both are an adversary of the U.S. Government and their incarcerated members are political prisoners.  Both have the same goal, change the form of government and form a new nation.  Both groups can be identified by looking into their eyes.  No feelings, no soul.  They are militant, armed, and dangerous.  Right wingers don’t mind dying for God.  They have common scapegoats.  Jews, bankers, politicians and lawyers.”
He emphasized that all public servants are in danger and those that enforce the law are most likely to be killed by bombings and assaults.  Seger assured the class that all law enforcement officers and public servants live under a continuous threat.  He said that the right wing is growing with phenomenal speed.  According to him, there are 14 million right wingers who hate the government and want to overthrow it by force.  “They are better armed than our law enforcement agencies and trained on a continuing, regular basis, not in defensive tactics, but in aggressive military and guerrilla tactics…they are white, conservative (…their beliefs are extreme) Christians.  Their ‘compounds’ are located, for the most part, outside metropolitan areas.  Federal laws make it difficult to investigate these organizations.  Individuals can be investigated, but organizations must be tied in before they can be investigated.  There will be more bombs, don’t ever let your guard down. During the Waco ‘bombing,’ there was one web site run by right wing extremists, now there are between 350-2000.  Money is no problem for right wingers.  They have all the money they could ever need.”
After exploring nuclear explosions and contamination, the advantage of CB weapons, biological agents such as anthrax, taularemia, shigella, flexneri and salmonella, and chemical weapons such as organophosphate compounds, blood agents, choking agents, blistering agents, nerve agents and other chemicals such as prussic acid, arsenic and strychnine, Sager ended this outrageous day by showing a film of Arthur Kirk demonstrating to the federal and military employees present how to make ricin from castor beans which is 6,000 times as potent as cyanide poison and 12,000 times as potent as rattlesnake venom.  Kirk suggested that the ricin be put in hypodermic needles so that people can pass through crowds and prick people’s skin with the needles.  All persons will be dead with in three days.
There were two syllabus’ given out with 100 pages each, naming hundreds of mostly Right Wing Constitutional groups, including various Militia and Second Amendment organizations.  There were jury annulment groups like Fully Informed Jury Association (FIJA), there were groups opposing unfair taxation and the Federal Reserve system, there were the anti-abortion groups, and even such as the John Birch Society, etc.  There were those who have been crying out against abortion, feminism, homosexual rights, and other sins such as Matt Trewhella of Milwaukee, W.N. Otwell of Texas and this preacher saying, “Dixon is a strident tax protester and militia supporter.”
Now do you understand why Attorney General John Ashcroft said that he ordered the raid on the Indianapolis Baptist Temple?   He said, “When I came on board last winter, the first Department of Justice operation conducted on my watch was for the department to seize the assets of an organization known as the Indiana (sic) Baptist Temple. It was a Marshals Service assignment. The men and women of this agency worked patiently; they worked professionally with other law enforcement officials, with the media, and with church leaders to resolve some very thorny issues, not the least of those issues was the threat of armed militias and violence.” 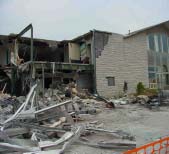 Where did he get that information?  He got it from Deputy Attorney General Eric Holder and his people, who were holdovers from the Clinton/Reno Justice Department.
Where did they get this idea about us?  They got it from this material that Rightmyer and Seger had been circulating for several years.
But where did they get their information to put their syllabus together?  That will be revealed in tomorrow’s article, the Lord willing.
If you would like to have The Trumpet on line, send your e mail to me at: drgregdixon@earthlink.net.

Dang it, I keep picking up these nuances and feeling left out. "Our compounds are largely outside urban areas?

WAS I AGAIN ABSENT THE DAY WE HANDED OUT RURAL COMPOUNDS? And IS IT POSSIBLE THERE ARE ANY LEFT OVER?

Seriously, I was apparently absent when we handed out the "assault rifles" and all the sophisticated military and communications gear we're reputed to have and I don't really care about that stuff as much as a COMPOUND.

Hells man, I'm not even sure what a compound specifically is but it sounds cool as hell and I want one. That's totally gonna be the new thing. It used to be "come chill at my crib" and now it's gonna be "come bunk at my compound yo".

All I'm saying is if I found out you guys all got compounds and I didn't get one, I'm gonna have a serious attitude about it.