If you are brought into court on drug charges there are only two possibilities: either you took the action alleged, or you didn't.  Either way, you are in a unique position to end the state's abuse of the criminal justice system.

The Guilty Plea
In the criminal justice system in the United States, you have the right to a trial by jury, you have the right to face your accuser, and you are considered innocent until proven guilty.  Those are heavy burdens placed on the state, and rightly so, as the wrongful imprisonment of an innocent man is an irreversible violation of his rights as a human being to enjoy liberty and property.

However, a guilty plea short-circuits that entire system.  All but the barest burden is removed from the state, and the burden is laid on your shoulders to convince a court to be lenient.  The state wants that burden on you, and tailors their punishment arguments in a way to get that guilty plea.

Numerous factors come into play, including mandatory minimum sentencing.  The basic game, though, is to set up a payoff matrix where the punishment meted out on a guilty plea is lower than the legal costs, time, and possible punishment risk in contesting the charges.  This game, lobbied and enacted by lawyers who deal with the system every day, is purposefully set up to facilitate this payoff matrix.

There are many tricks the state can use, including piling on charges, abusive motions and filings, lengthy continuances, plea bargaining, and outright intimidation of the defendant and his or her family.  All of these things are well within the legal and ethical canons of drug prosecutions.  All of them have the specific purpose of increasing the cost of contesting the charges.

It is a well-practiced game of Three Card Monty where you, as the defendant, are the rube.

Going Against the Grain
Since the practitioners of this system have piled all the incentives on getting you to plead guilty, there must be a significant downside risk to them if you decide to contest the charges.  A judge may dismiss the charges before going to trial.  The state may not meet its burden of proof.  The courts may be packed so tightly with cases that you cannot receive an expedient trial.  And, heaven forbid, you may be not guilty of the charges in the first place.

Next month, the movie American Violet opens, fictionalizing the real-life story of Regina Kelly, a resident of Hearne, Texas.  In 2000, Kelly and 27 other defendants were rounded up in a Byrne Grant-fueled bit of stats padding by district attorney John Paschall.  Kelly refused a plea bargain, and insisted on a trial.  The charges were dropped before it came to trial, but not before Kelly spent three weeks in jail and was the subject of police and prosecutor intimidation.


The Agitator, Radley Balko, interviewed Kelly a couple of years ago.


Take note that, despite being cleared of all charges, Regina Kelly has not been exonerated; she carries an arrest record that will follow her for the rest of her life.  Also note how Kelly was implicated.  An acquaintance, convicted of a property crime, was offered a deal to give up 20 names of people involved in consensual acts.

Again, these practices are well within the legal and ethical canons of prosecution.

The Not-Guilty Plea
One of the more perverse parts of the US criminal justice system is that every party – prosecution, defense, judge, jury, clerk, and bailiff – are financed by the defendant.  Refusal to pay for your own prosecution nets you an additional charge of tax evasion.

The state does not want you to include in your cost-benefit analysis any consideration of principle or of encouraging a system where people like you are ensnared.  They do not want to prosecute or punish violent crimes or property crimes, they want to prosecute and punish moral crimes because that's where the money is.

In a property crime, the state doesn't get to keep the property recovered; it goes back to the victim.  Only in the case of a moral crime, where there is no victim, does the state profit.  The fines you pay and the property they can seize from you and other innocents is the ammunition for the next round of prosecutions and the salaries paid to an ever-expanding prohibition apparatus.

A guilty plea will not get you your life back; your life has been changed forever, and you will never get any of your property back from the state.  It is forfeit.  So, you might as well force the state to use the property seized from you, the presumed innocent, to prosecute you in a jury trial by pleading not guilty.

At the very least, your property won't be used to prosecute the next innocent victim of the state.

The Moral Case for Innocence
If you did not commit the act as charged by the state, you have a moral obligation to plead not guilty.  As high as the incentives may be to plead guilty to something you didn't do and get on with your life, you have been drug unwillingly into a broken system of criminal justice and your guilty plea only perpetuates that system.  You are a victim, and only you can take action to prevent further innocent victims from suffering your fate; whether you wanted to or not, you have just become an activist with an obligation to protect your family and future generations from wrongful prosecution.

If you did commit the act as alleged, you also have a moral obligation to plead not guilty.  When you committed the act, you made a conscious decision that it was the right thing for you to do at the time.  In retrospect that decision may have been wrong, however, by pleading guilty you are perpetuating a system that punishes people for making conscious decisions that harm no one but the decision maker.

If your decision resulted in harm to anyone but you, that person has recourse.  That is, they can take civil action against you to make themselves whole, or nearly so.  But, the state is not an identifiable person that can be harmed.  By bringing drug charges against you, they are seeking to punish you for merely making a decision that, given the information you had at the time, seemed like the right decision for you to make.

Now, in a attempt to punish you for making a decision, they are forcing you to make another decision, that is, to plead guilty or not guilty.  However, if pleading guilty is the “right” decision, why is there such a need to pile incentives on that side of the payoff matrix?  The answer, of course, is that pleading guilty to a non-crime is the wrong decision. 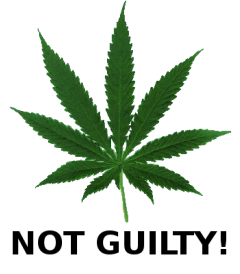 Absent the perversions in the criminal justice system, the state knows that no one in their right mind would plead guilty to a non-crime.  Therefore, the prohibition apparatus has codified the perversions.  When you made the conscious decision to commit the act alleged, by your actions you declared the law perverse.  At trial, you are in the position of speaking for all the other people who have and will make that same declaration.

Clogging
The legitimacy of non-crime laws rests on your willingness to throw yourself at the mercy of the court.  When you contest non-crime charges, you challenge the legitimacy of the law itself.  Additionally, you are diverting prohibition resources (courts, prosecutors, police, etc.) from the prosecution of others for non-crimes.

In a civil society, it is entirely just that anyone faced with prosecution for a non-crime contest that prosecution and refuse unjust punishment.  Consider that no one would argue for the violent arrest, prosecution, and incarceration of a dog that carried around a cannabis plant in its mouth.  Yet you, as a human capable of making reasoned, conscious decisions for yourself with the ability to foresee results and consequences of your actions, are not afforded that same luxury.

A society that affords more rights of self-determination to a dog than its human members really puts the lie to the civil part of “civil society”.

In an uncivil society, there can be no legislative answer to making it civil.  No amount of lobbying, protesting, voting, or campaigning can turn uncivil to civil.  It is only in a courtroom, judged by a jury, that civility can be restored and the perversions contested, and they can only be contested by those wrongfully charged with non-crimes.

Beyond the convincing case for jury nullification made by Lysander Spooner and others, the fact is that if every person charged with a drug offense this weekend plead not guilty Monday morning, by Monday afternoon the courts would be in horrible disarray.  The incentives to prosecute non-crimes would be reversed so dramatically, that prosecutorial triage would necessitate a focus switch to violent and property crimes because they would be cheaper and easier to prosecute.

In other words, mass contest of non-crimes in court would quickly act to put the civil back in society.

Starting from the end, Powell, you are absolutely right. Even if a new law were created, it would merely create a new set of unintended consequences and do nothing to address the root of the violence problem - the prohibition apparatus. That's exactly why I don't have even the slightest time for a legislative solution.

You are also absolutely right that, since the payoff matrix can be manipulated by the court, it will be manipulated to incentivize the outcomes they favor.

However, if you look at the marginal case, where somebody has every reason in the world to plead "not guilty", to change the payoff matrix enough to get a guilty plea would necessarily involve zero punishment for a guilty plea. Working back from there, we can theoretically find a point at which manipulation of the payoff matrix is just less satisfactory than the status quo.

Skipping conspiracy, for a second, to your first statement on game theory, it is true that outcomes based on trust do not establish stable equilibriums. What you are probably thinking of is the Prisoner's Dilemma, which has long been considered to have a Nash Equilibrium of defect/defect. While not widely known, a second stable equilibrium has been discovered which cannot be discounted without adding additional rules to the game.

Basically, if the two prisoners have any knowledge of each other greater than zero, the stable equilibrium is cooperate/cooperate and, in fact, defect/defect becomes unstable.

a) effectively communicate the unseen payoffs in the matrix - attempting to approach that point where manipulation of the payoff matrix is just worse than the status quo for prohibition-favored outcomes.

and, b) establish a common link between defendants, such that their knowledge of other, present and future, defendants is greater than zero.

This seems like a monumental task, however, consider that it is not unprecedented. There is a very well understood, zero-financed, uncoordinated campaign with astounding results called "stop snitching". The effect of the stop snitching (maybe culture is a better word than campaign) is a lot of prohibition apparatus resources devoted to gaining, keeping, and protecting the few snitches they can, exactly as I predict for a "not guilty" campaign/culture.

The problem is game theory requires trust that others will do the same. Further, anyone trying to organize such a response could be charged with conspiracy to _____________. Thwart justice, interfere with .... And lastly, maximum sentence overt examples would be selected and made to pressure those into switching back to copping a plea. Laws would change alright. Just not in the manner so as to diminish the ever flowing slaves into the maw of the prison industrial complex.

The Impotence of the Supreme Court