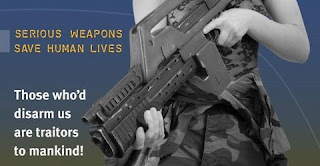 By: James J. Stachowiak ( American Resistance TV.com) ( Freedom Fighter Radio.net) America and its freedom is about to be destroyed.. We are now faced with the loss of our sovereignty, and lose what little freedom we have left.

And now I read that there is a new bill to prevent political dissents from owning guns, the bill is HR 2159. This bill is being pushed by the GOP rep Peter King of New York and has the support of a number of other members of the GOP. Peter King is also being supported by 9/11 Families For a Secure America. 911 Families For a Secure America also is in support of other programs aimed at destroying our Liberties.Programs that were designed by the DHS such as the E-Verify and The Real Id Act both which promise security at the expense of liberty, we were warned about giving up our liberties for the promise of security 243 years ago.

HR 2169 is called The Denying Firearms and Explosives to Dangerous Terrorist Act of 2009. Sounds good don’t it? Don’t be fooled as you may be the terrorist. We are all familiar with how the government has defined terrorists,people such as those that love the Constitution, those that quote the founding fathers, those that peacefully dissent, those that are pro-life, believe in the right to bear arms, of course no one wants terrorists right? Problem is this bill will give the enemies of freedom a new weapon to further destroy what’s left of a free America. How so? To begin with federal officials will be able to take the information such as simple summary of evidence presented in a court of law and use it to target any American of their choice and classify them as a domestic terrorist so that they may be disarmed and judges will be obligated to accept it.

This may be the spark that ignites the 2nd American Revolution
Read full article. Click here

5G Towers Are Being Burned All Over The World

REBELLION: 'This Isn't Nazi Germany/Soviet Russia Where You're Asked For Your Papers!

From Quarantine To Tyranny To Rebellion: Where Is The Line In The Sand?