Join-Us | Log-In
Freedom Forum | Translate
Evangelist Ken Barber is a Baptist Evangelist who ministers in the prisons of Texas, across the nation and around the world.  He and his wife Mary have eight children and are home schoolers.  He has just recently returned from his third trip to Kenya where gives this eye witness account of Moslem brutalilty against Christians. This idea of “peaceful” Moslems that Presidents Bush and Obama are touting will not hold water because they are only peaceful until they are in a position where they can exert their true doctrine of violence and then they rule or ruin. Islam has always gained converts through conquest. They know no other method except when they want to fool the gullible. Read on and weep.
Dear Brethren,
After spending a night in Kakamega, Kenya, hearing the cries and the screams of women all night as they were losing their husbands while being hacked with machetes and driven from their homes by Barak Obama's cousin and political partner Odinga, almost certain that the Muslims were going to come in on me during the night, and then hearing their Muslim chant ring out at 5 o’clock in the morning, the following information troubles me. (Evangelist Barber is referring to the Moslem Prayer gathering at the U.S. Capitol planned for September 25th).
If you believe that these people are peaceful and have no intent of hurting you, then you are greatly deceived. I was there in Kenya during this crisis take over and these people did not hesitate to burn a Church building full of women and children.
I stayed at a hotel owned by leading supporters of the "Orange Demo(n)cratic Party"  (pun intended), next door to their headquarters. I was told personally by this very prominent leader that these troubles would not cease until they got what they wanted. He looked me in the eye and said this in regard to our conversation about the violence of the youths that were being paid to drive the Kikuya tribe (where many of the Christians are found) from this region. It seemed both sides were viewing me as someone who would come back and tell their side of the story.
The Christian men sat me down in their homes and told me that they feared Odinga and what his reign would mean. They also assured me that President Obama was from Kisumu as was Odinga, and that it was common knowledge that Obama was supporting Odinga. 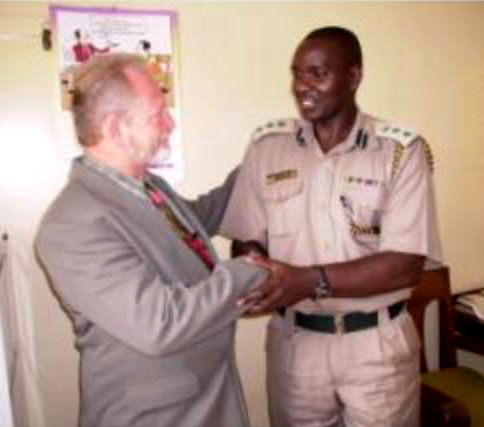 Prison Commander Joseph Kinuthia  of the Kikuya Tribe and Evangelist Ken Barber in Kenya
Folks, this is not a scare tactic. I was there and I saw first hand what these people are capable of. It is my opinion that this strategy is the reason Obama has stated that there needs to be a citizen’s military force as strong as the military itself, to carry out this type of disturbance if necessary for the take over or destabilization of our country. Wake up. Pray!
Evangelist Ken Barber
Bay City, Texas
Please take the time to view these two sites.
http://islamoncapitolhill.com/Home_Page.html
http://www.youtube.com/watch?v=Lh10-w351MI
URGENT WARNING!!  MUSLIM PRAYER MEETING AT THE U.S. CAPITOL CHECK THE LAST LINE.
Washington, D.C. - On September 25th there will be a national prayer gathering of Muslims on the west front of the U.S. Capitol Building.  They are expecting at least 50,000 to attend from mosques all across America. They will gather to pray from 4:00 AM until 7:00 PM. The gathering will take place by the site where U.S. Presidents have been inaugurated since 1981.  The organizers say that it was Obama's inauguration speech in January and his speech broadcast from Egypt in June that gave them the idea for this prayer gathering on Capitol Hill.

They have a website set up for this event. If you never look at another website look at this one, especially the final words:
www.islamoncapitolhill.com
Here are the final words on the page:
OUR TIME HAS COME
Contributions to Ken Barber’s Prison ministry can be sent to P.O. Box 11, Indianapolis, IN 46206 either by check or MO. Please make donations payable to him personally.

I am so glad you contributed this article.  I have pictures somewhere of odinga and his thugs wielding machetes.  Obama also raised a million dollars for odinga. People were burned alive locked in a church.  If we are known by the company we keep obama is the bottom of the barrel.

Part 3: These Questions Need To Be Asked Across America

Part 2: These Questions Need To Be Asked Across America

These Questions Need To Be Asked Across America

America Is NOT Prepared for the Future; Nor What's Coming

Why Are We Turning "Mother's Day" into "Birthing People's Day"?

Is Anyone Angry About Biden's Inviting An Invasion Of Our Borders?

How Many Millions of Refugees and Immigrants Can America Absorb?