Join-Us | Log-In
Freedom Forum | Translate
I realize I'm too late this time around, but I wanted to get an early start to nominate someone for the next time the Nobel Peace Prize is given out. I nominate Charles Manson. 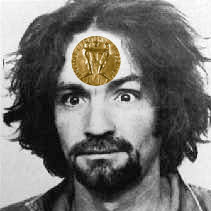 As you all know, Barrack Obama just won the Prize. And so, based on the assumption that it was quite proper and appropriate for him to have received it, I will now demonstrate that Charles Manson is even more worthy of such an honor.

For those who don't know (if there is anyone), Charles Manson, a notorious mass-murderer, was the head of "the Family," which several decades ago went on a killing spree. Now, at first glance, you might wonder why I would nominate such a person for the Nobel Peace Prize. Well, I base my argument on comparison, rather than on an objective examination of Mr. Manson's personal achievements. I will show that, compared to Barrack Obama, Mr. Manson is far more deserving of the Prize.

There are similarities between the two men. Both have talked as if they are the reincarnation of Jesus Christ, and both believed they could use racial tensions to empower themselves. Another similarity is that, as far as I can tell, neither of them has actually killed anyone. Yes, you read that right. However, both have instructed others to kill people, and those "others" did.
Now we get to the crucial difference: while the followers of Charles Manson killed less than a dozen people, the followers of Barrack Obama have killed hundreds (counting only civilians). It's hard to know the exact number, but even if you only count Afghanistan, it completely dwarfs Mr. Manson's "accomplishments." You can whine about it all you like, but the facts don't lie: Manson has less innocent blood on his hands than Obama, by a long shot. Therefore, Charles Manson is more a friend of "peace" than Obama, and therefore, by comparison, must deserve the Nobel Peace Prize.

Let's get serious, folks. Wouldn't you think that the Nobel Peace Prize should be awarded to someone who has promoted peace? If that is the case, it is patently idiotic to ever give the prize to anyone in "government" (which the stupid committee has done over and over again).
What is it that "governments" do? Do they make helpful suggestions? Do they show, by example, how to lead moral lives? Do they bring us together and reward cooperation? No, they use violence to control people. And that's all they ever do, though they often try to hide it under lame veils of "compassion," and bullpoop about the "common good." Oddly, the title of one of Charles Manson's songs is disturbingly appropriate to the plans of Mr. Obama, and all other "government" "leaders": "I'm Scratching Peace Symbols on Your Tombstone."

What "governments" do is pass and enforce "laws": demands and commands backed by the threat of violence. Every once in a while, a threat of violence is actually justified, such as, "Give the lady back her purse, or I'll slug you." But only a tiny fraction of threats by the state (which they call "laws") fit into the category of defensive, legitimate threats. And nothing Obama is pushing is about using force to defend against aggressors; it is all about committing aggression, against people who have committed no force or fraud. (If you actually believe that "Obamacare" is about adding a new option for you, you need your head examined.)

Like Charles Manson, and like every other "President," of either party, Barrack Obama is a mass murderer. (They are also all cowards, because they make other people do their dirty work for them.) And Obama just got $10,000,000 for his "extraordinary efforts to strengthen international diplomacy and cooperation between peoples." Cooperation?!? Do the morons who hand this thing out know the difference between coercion and cooperation? Apparently not. "Government" is never about "cooperation," and it is never about "peace." It is about a ruling class forcibly controlling everyone else. And it takes years of authoritarian indoctrination to make the general public so stupid that it can't see that obvious fact.

8 Comments in Response to I Nominate Charles Manson

There is another reason Manson should get another Nobel... the Nobel that was awarded to Al Gore, Charlie was first to point out global climate change. In an interview from the 70's he told us the ice caps were melting because of "the machine" we run. etc.

I agree with Larken. Unless a president goes into office and methodically dismantles the mechanisms of government, then even doing nothing makes a seated president more of a killer than Manson. If you do nothing every day as a president, you are still passively killing everyone that is being killed in pursuit of active government programs.

Obama was awarded the Nobel in recognition of his overall global effect, not just specific tasks he checked off his to-do list.  It's a matter of scale.  He positively affected more people and elevated overall peace than the others, it's that simple.

In appealing to the nations of the world to reignite diplomacy and cooperation, as opposed to "Yer with us or agin us" moronic arrogance, the prize committee reflected what the world communicated; a big sigh of relief that the US is back under relative control and once again forming peace initiatives.  Sure, men in power are perpetuating wars for profit.  Same ol same ol.  Different prize committee.

Drop the sensationalizing.  The act of peacemaking was recognized, not murder.

And Obama has a race agenda?  Climb on down from Appalachia and join the rest of civilization, will ya?  Race baiting is for smaller intellects than yours.


Jimbo, do you know Charley didn't do those things, or are you just speculating due to lack of results?

Jimbo says: "The answer to all of these is "yes" when you substitute Obama for Manson." Not even close. If you think wrongful imprisonment, torture, and the rest of the supposedly anti-terrorism fascism is going to stop under Obama, or has even begun to stop, check the facts. (You could start by looking up "preventative detention.")

And if you believe the Russian tyrants OR the U.S. tyrants when they say they're doing away with weapons, you're way too gullible.


Jimbo also said: "but [Obama] didn't get [the Nobel] just for doing "nothing" as you and too many conservatives are saying."

1) I'm not a conservative. I bash the tyrants no matter which superficial mask they wear.

2) I didn't fault Obama for doing "nothing," or for not doing "enough." I would LOVE it if a politician did nothing. I said he committed mass murder, and continues to do so, just as Bush did, as Clinton did, as the first Bush did, and so on. The only "change" that has occurred is a change in window dressing, to keep the sheep believing in the cult of "democracy." Meet the new boss, same as the old boss.

I'll start by saying that Obama probably wasn't the most deserving person nominated.

However, did Manson ever direct the CIA to stop torturing people and bring the USA back under it's Geneva Conventions obligations? - no.

Did Manson ever sign the order to close the detention facility where the torture took place? - no.

Did Manson ever kill a missile defense shield that threatened a new cold war with the Russians? - no.

Did Manson ever negotiate with the Russians to try to reduce the size of our respective nuclear arsenals?  - no.

The answer to all of these is "yes" when you substitute Obama for Manson.

So again, while Obama may not have been the most deserving, and there are contradictions in the past decisions as you point out (Kissinger and Arafat come to mind), but he didn't get it just for doing "nothing" as you and too many conservatives are saying.

Can't argue with your logic!  Manson proves the lesser of two evils. You might add that the US Congress enjoys partnership with Obama, thus, he needs to share the Nobel with them.  Personally, all 535 need to be sent to the front lines to fight the bad guys.