Join-Us | Log-In
Freedom Forum | Translate
Report filed by Dan & Donna Holman
Dave and Dorothy Leach rode with Donna Holman to Wichita, Kansas in our Truthvan. They wanted to be at the courthouse to support to Scott Roeder who is on trial for killing abortionist George Tiller. They were joined by Michael Bray from Ohio, Drew Heiss from Wisconsin, and Gene Frye from Kansas City. Randall Terry and a few of his supporters did interviews outside the courthouse. There is bad blood between Randall Terry and Wichita’s Troy Newman over the Operation Rescue moniker. 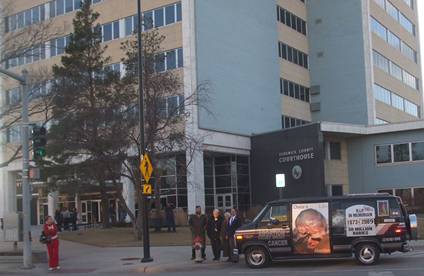 Local pro-lifers have been conspicuously absent during these proceedings. The significance of this trial is capturing the world’s attention and Operation Rescue’s sign trucks are no where to be seen. There are plenty of pro-aborts in the gallery tying a “hang man’s noose.”
This is America’s epitaph on of how we lost the culture. We did not lose because the wicked are more powerful than we. We did not lose because they have more money or influence; we did not lose because they have a seducing message; we lost because we did not show up! We lost by default!
Do you ever wonder why there are no Christian suicide bombers taking out abortion clinics? Heck! You can hardly find a pastor preaching an anti-abortion sermon, or a pew of people willing to listen to it! American “pro-life” “Christians” don’t want to hear about kids getting killed. Christianets need sermonets with lots of sugar, comedy skits, dancing zebras, and finger puppets presenting a cheerful but thoughtful message; something that relates to them and theirs’.
Is it any wonder why most pro-life Christians view Scott Roeder and his supporters as the radical fringe! They have had no sound teaching from their pulpits!
Many pro-life ministries do not act as if the baby’s lives are important. They bicker with each other over monikers, window dressing, and conscience money.
Scott Roeder is an embarrassment to them. Mr. Roeder acted as if the children Tiller killed were worth defending, a big “NO-NO” in pro-life circles. Pro-lifers cannot come up with a logical argument as to why the double standard? Why is it OK to use force, even deadly force, to protect a classroom of kindergarten children, but it is forbidden to use force to protect pre-born children slated for abortion? Are pre-born children worth less than post-born children? If so, we have tacitly admitted that a mother DOES have a right to kill her unborn child! Her unborn child is somehow sub-human and NOT entitled to an inalienable Right of Life.
The past 3 days Truthvan has been prominently parked at the entrance of the Sedgwick County Courthouse. The despised children pictured on the van are junior prosecutors; their tortured bodies are an indictment to the authorities sanctioning their demise. Tiller should have been judiciously hung like “Chemical Ali.” George Tiller might be alive today if these authorities did not protect his baby-killing operation.
The state should wrap up its case today. Tomorrow former Attorney General Phil Kline will testify for the Defense regarding illegal abortions George Tiller performed.

When you check the DNA of a fertilized human egg, you find human DNA that is different than either parent, yet similar to both. The fact that it is different shows that it is an individual person. Who stands up for the rights of this person?

Every time a man and a woman come together and create a fertilized egg - EVERY TIME - they have formed a sacred trust. This trust has the responsibility for the life of a human being that they have helped to bring into existence, right from the moment of fertilization. It's a TRUST because the newly formed individual is TRUSTING them.

"22 If men who are fighting hit a pregnant woman and she gives birth prematurely but there is no serious injury, the offender must be fined whatever the woman's husband demands and the court allows.

"23 But if there is serious injury, you are to take life for life,

"24 eye for eye, tooth for tooth, hand for hand, foot for foot, 25 burn for burn, wound for wound, bruise for bruise."

Is it just me or is there a huge contradiction looming here? We all want freedom of choice for everyone right? That's what liberty is! But some "libertarians" seem to think women should be our reproductive slaves. Breeding cows. Where's the freedom in that? For starters, no males should have a say. That's a no brainer. It's hilarious that libertarians who believe in "no services at the barrel of a gun" have such crossed wires in their head that they can believe "we'll shoot you if you exercise free choice" at the same time. Which is is? Freedom or fascism? Not letting women decide for themselves is fascism, straight up. People who are anti-choice are pro-nanny-state. They should make up their mind. Stalin and Mao only wanted control from Cradle to Grave. These anti-freedom crazies want it from Conception to Grave. How sick is that?

What are you talking about?  Of course Christians have bombed women's clinics.  And if the pro-choice crowd isn't prominent, maybe it's because they don't want to get shot.