Join-Us | Log-In
Freedom Forum | Translate
Wannicka Fox (31), flew out of Albuquerque, NM Tuesday evening January 12,  expecting  to arrive in Port-au-Prince the next day after a stop over in Ft. Lauderdale.  She didn’t realize until her friends met her in Florida, that if she had left a day earlier, she might have never seen her missionary husband David and their six children again, because she could have very well been one of the 200,000 killed in the 7.0 earthquake that hit her native land on the very day she was scheduled to arrive. 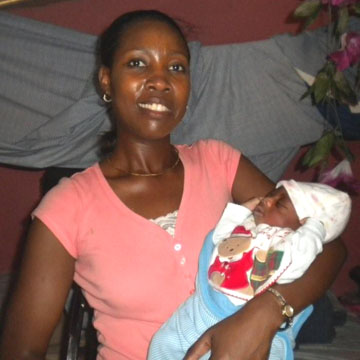 Wannicka and her family had been on furlough in the states for about one year after spending a grueling 12 years in Haiti in which she had helped her husband David found the Bristout Baptist Church, in a suburb of Port-au-Prince, and saw it grow to an attendance of over 100 before they turned it over to their native pastor C J Evrard.  Wannicka was looking forward to spending a couple of weeks with her parents, siblings and church folks.
Following are recent interviews that I conducted with Wannicka and David.
GD – “When did you fly from Ft. Lauderdale on to Santo Domingo the Capitol of the Dominican Republic?”
Wannicka – “January 20.”
GD – “How far is it to the Haitian border from there?”
Wannicka – “Seven hours.”
GD – “How did you get from the airport?
Wannicka – “My uncle and cousin took me, I let him know I was coming – I spent a night with them. They have cell phones so I was able to call them.”
GD – “Do they live there?”
Wannicka – “My cousin lives there but my uncle was visiting in Santo Domingo.”
GD – “He missed the earthquake then?”
Wannicka – “Yes.  They don’t have any problem getting into Haiti from Santo Domingo – he has a visa and passport and can go back and forth – if you are legal there is no problem.”
GD – “So then what did you do – did they have a car?”
Wannicka – “No, they didn’t have a car.  We rented a taxi and a top-top (a small pick-up with a top) – they met me at the airport – we went to their house – got up early – we got a lot of supplies and my uncle and cousin and a driver drove me to the border.”
GD – “What kind of supplies did you take?”
Wannicka – “Rice, beans, juice, water, soap, toothpaste, medicine – diarrhea medicine, Tylenol, medicine for wounds, I brought a lot of medicine from the states.”
GD – “How much did you pay?”
Wannicka – “$1,000 to buy the stuff in the Dominican.”
GD – “If you had bought the supplies in the US – how much would it have cost you?”
Wannicka – “I don’t know”
GD – “I’m sure that it would have been prohibitive. How did you get it across the border?”
Wannicka – “They drove to the border with the two vehicles – they have a Haitian passport and visas.  Pastor C J met us at the border and drove us to Port-au-Prince.”
“We took everything to my mother’s house.  Food – rice and beans – fish, tomato paste, canned and powdered milk, juice – anything to keep them strong. 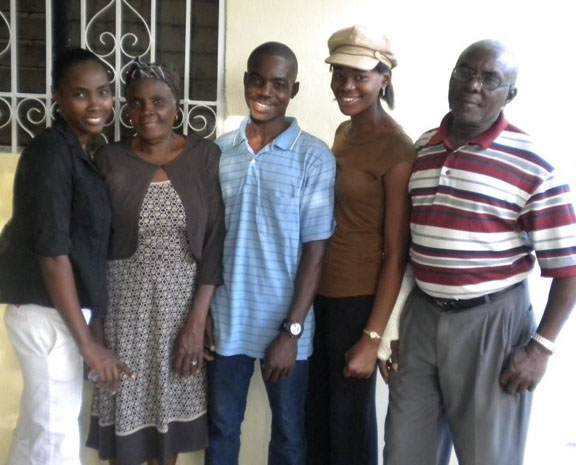 GD – “Were any of your people killed in the quake?
Wannicka – “No, none of them were killed from the quake.  My cousin’s house fell on her and her son.  They were taken to hospital– she is fine.  One of my Brothers–in-law was shot two days later – he was downtown – not sure why he was killed – everyone else is fine.”
GD – “What are the living conditions of your family?”
Wannicka – “They are sleeping outside because of the aftershocks – I was sleeping outside too.  All of the cooking is done outside.  They only have three rooms for the entire family, no running water.  No electricity.  But they are just thankful to be alive.” 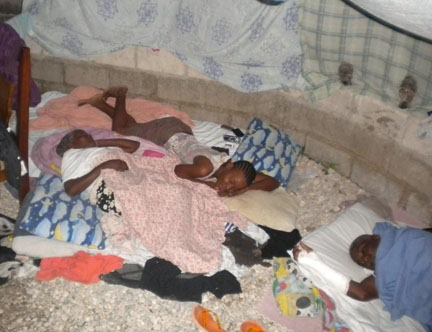 GD – “Tell us about the church you and your husband founded.”
Wannicka – “Pastor C J’s family and church were fine – they were sleeping inside the buildings.  One church member – a young college student was missing – they never found her body – Analita is her name – she has never been found.”
GD – “How long did you stay?”
Wannicka – “I stayed for one week – I had stayed one week in Florida – and one week in Haiti – and I wanted to get back to my children and my husband.”
GD – “Do you know how the Ministry of Cults is doing?  Was it destroyed?” (This is the government agency that registers all religion in Haiti but the Fox’s ministry is not a registered ministry.)
Wannicka – “No, I don’t have any information – it was hard for me to go out and walk around – it wasn’t the same Haiti – everything was destroyed – I started crying – it was so sad to me – so I didn’t make it to many places – it was too hard.” 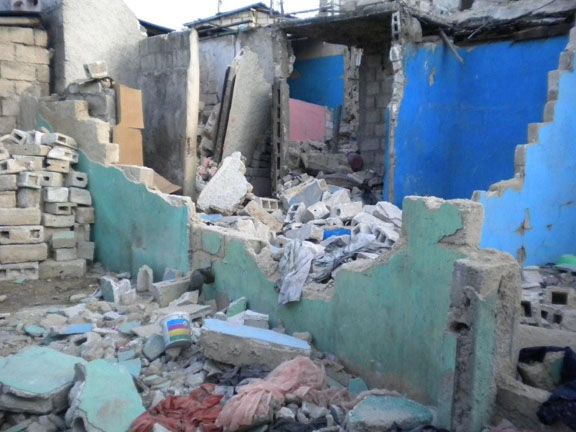 GD – “What do you think God is doing through the earthquake?”
Wannicka – “People are asking why did it happen?  Every year something happens to Haiti.  I think God wants people to know He is God.
“It is hard for me to explain in English.  In December of 2009, it started to happen that people would go out for a walk and they would disappear; and then later they would find their body later with the heart missing – we think the hearts were used in voodoo services – it is so sad – so sad watching all that has been happening – since Haiti was given to the devil - many of them aren’t saved – and they don’t know the Lord.”
GD – “Do you have any information on the orphanages or hospitals?”
Wannicka – “There was one orphanage – they are all safe.  Some Americans from the U.S. wanted us to take the children to the US.  The government didn’t want them to go because they are the future of Haiti.  I think they want to leave them there in Haiti to serve the Lord and keep Haiti going, from what the head of the orphanage indicated. The orphanage is doing ok structurally and no one was injured.
GD – “When you were in Ft. Lauderdale, why didn’t you just go back to Albuquerque?”
Wannicka – “It is my country and my people – I couldn’t sit in the comfort and pleasure of the US and not get supplies and food together to take to my people.  I couldn’t get in touch with anyone for awhile  – finally got in touch with them.  They asked to do something – they were  sleeping outside – needed water and food – I couldn’t stay home and not doing anything – took food down to feed my family.” 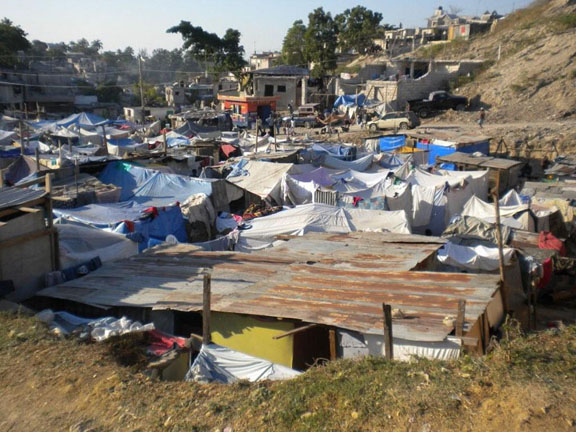 GD – “Have you seen any evidence of a spiritual awakening from this tragedy?”
Wannicka – “We have one church in the town of Luly with Pastor Wilner - we had like over 150 saved after the earthquake.” 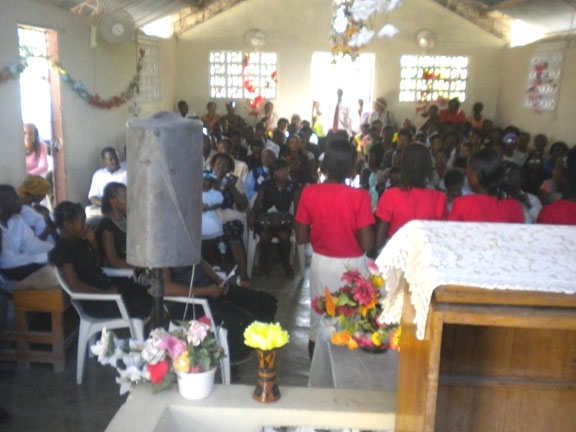 GD – “Can you tell us of any other spiritual blessings from the Lord that has come out of this?”
Wannicka – “I think everyone has been so kind to Haiti –  we are seeing many  people getting saved – it is a miracle to most of them to still be alive . Luly was a hard place -  we have been down there – they thought that they didn’t need to listen to the gospel – they could take care of themselves – they didn’t need God. After the earthquake they were the ones that came – it’s amazing to see how many people came – old people, teenagers, all ages – came to be saved – I don’t know how to explain all of that.”
David Fox (40) Interview
GD – “David, please give us a brief overview of yourself.”
David – “Thank you, Dr. Dixon.  I am from Crittenden, Kentucky where I was converted to Christ and baptized in a Baptist church.  As you will remember, I came to Indianapolis and enrolled and graduated in1991 from Temple Baptist College, which you founded when Pastor of the Indianapolis Baptist Temple.  While there God called me to be a missionary to Haiti. I sold everything in 1996 and followed His leading and went to that country to preach the gospel of Christ.”
GD – “With Wannicka’s help, you founded the Baptist Church of Bristout which is a suburb of Port-au-Prince, which presently has an attendance of more than 100 each Sunday as I understand.”
David – “Yes, that’s correct.  I have now turned the church over to our very capable native pastor C J Evrard and when I go back I plan to go to the country to minister to the people there.”
GD – “It’s a miracle that the Bristout church building is still standing, right?”
David – “Absolutely, there was no damage except for the security walls around it that fell.  Out of all of the church family, there was one fatality, one young lady in her twenties.  The Church of Luly – No one was killed – they are approximately 25 miles away.”
GD – “David, explain the problem in getting the aid to the people of Haiti.”
David – “The problem is very complex.  For instance a lot of aid has been given, but not given to the right people.  The Bristout church allowed the building to be used for storage by one of the large organizations, but the next morning it had been stolen by banditios to sell it on the black market.”
“It’s best to give aid through a missionary that’s over there because much of the aid that’s going into Haiti is ending up on the black market.”
GD – “You are planning on going into Haiti soon with supplies?”
David – “Yes, soon.  I am going to try and get help to those who are not getting the help.
GD – “What will you take on the plane when you go?”
David – “I will take tents, flashlights, clothes, money.  Some of the markets are open.  It’s best to just buy things there.”
GD – “Obviously your aid for the people there will be an on going project. Where can people send gifts to you for this relief effort for Haiti?”
For you that would like to send a gift for Haiti relief and know that it will be personally supervised by Missionary David Fox, send your gift by check or money order to David Fox.  In the memo put: Haiti Relief.
Address:
Rev. David Fox
P. O. Box 2058
Santa Cruz, NM 87567
E mail address is: dwfnhaiti@aol.com