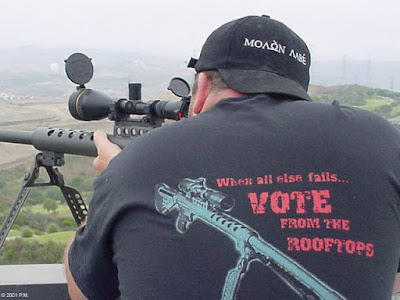 This is an interesting story, stimulates the imagination it does. Here are some excerpts:

"First, a natural gas pipe was shoved through a hole drilled into the roof of the gang enforcement unit's headquarters. The building filled with flammable vapor but an officer smelled the danger before anyone was hurt.

"It would have taken out half a city block," Capt. Tony Marghis said.

Then, a ballistic contraption was attached to a sliding security fence around the building. An officer opening the black steel gate triggered the mechanism, which sent a bullet within eight inches of his face.

In another attempted booby trap attack, some kind of explosive device was attached to a police officer's unmarked car while he went into a convenience store.

"There's a person or people out there, a bunch of idiots, trying to do damage to us," Hemet Police Chief Richard Dana said. "We can't expect our luck to hold up, we need help."


I thought carefully about what I wanted to say, at least in this public manner, about this matter. Did I snicker at their boldness in private? Did I grin at their creativity in privacy? Did I feel a thrill rush through me at the thought that the constant governmental assault on our rights and freedoms may not go unanswered now that the political system is hopelessly broken and ineffectual? I'll keep the answers to those questions to myself, I guess. After all, we do live in interesting times.


Here, however, is what I'll say in public. Politicians would do well to take heed. They ram things down our throats that they clearly know we don't want. When they forced us to bail out the banks, indebting us for generations, they knew the American public did not support that act. They know fully that the American people are not in support of Obama care, yet they are doing their best to force it down our throats. Never mind the states acting to try to protect their citizens from this legislative obscenity, never mind public opinion. Rather than regulate the parasites sucking money and pushing up the prices for medical care, they choose to regulate the people and force them to give money to the inurance corporations and other parasitical industries associated with the health care industry.

And, that's all I'm going to say on the matter. Publically, at least.