Join-Us | Log-In
Freedom Forum | Translate
Following is an email exchange between Sam Adams, Pastor of Independence Baptist Church, Belleview, Florida, John McGough, and Jason Wiesepape, Research Assistant to the President of Dallas Theological Seminary in which they conduct a friendly discussion of the IRS tax-exempt scheme for churches. This is most valuable for an understanding of one of the leading evangelical seminaries in America today on the subject of church and state especially as it interprets the Internal Revenue laws in the light of Romans Chapter 13.
John McGough is a fifty-one year old machinist in Houston who received Mr. Wiesepape's answer after posting a question on the Seminary's website under Theological Questions concerning the matter of churches being tax-exempt as 501 (c)(3) organizations. Mr. McGough then contacted Pastor Adams for help in answering Mr. Wiesepape. For the sake of space we only include five of the exchanges.
From: John McGough
To: Jason R. Wiesepape
Research Assistant to the President
Dallas Theological Seminary
Type: Bible/Theology question

I have done a study into this subject. The I.R.S. "Publication 557" under Religious Organizations it states 2 guidelines (1) That the particular religious beliefs of the organization are truly and sincerely held. (2) That the practices and rituals associated with the organization's religious belief or creed are not illegal or contrary to clearly defined public policy. I have difficulty in understanding how a person who believes that "Jesus Christ is the way the truth and the life and no one comes unto the Father but by him" could agree with this. Why should I or anyone be willing to agree with something like this that clearly states we will not say anything that goes against “Public Policy.” “Public Policy” down through the centuries has not agreed with the true faith in Christ. Why do the churches and pastors and maybe Dallas Theological Seminary agree with this? If a church or school is tax-exempt, then they have agreed with this. I look for a Biblical reason .
No man can serve two masters. Be not equally yoked to this world.
FROM: Pastor Sam Adams
Independence Baptist Church
Belleview, Florida
Date: Fri, December 18, 2009 3:01 pm
To: Mr. Jason R. Wiesepape
Research Assistant to the President
Dallas Theological Seminary

Dear Mr. Wiesepape:
Thank you very much for inviting me to interject my thoughts into your dialogue. I must say at the outset that I am somewhat taken aback at your somewhat smug dismissal of the critical issue Mr. McGough has raised with you as a "red herring" or non-issue. This is an extremely serious issue for the churches in our day; it is the very same issue confronted by the early church, and is the very issue for which the early Christians were hated by Rome, gathered up and shipped to the Coliseum, and thrown to the lions. The issue is, to whom does the church submit, or who has authority or jurisdiction over the church: the Lord Jesus Christ, or civil government. I assure you that the question is far more serious to the Lord Jesus than it appears to be to you; as it really boils down to, who is Lord: Caesar, or Jesus? As we will all stand before the judgment seat of Christ I suggest that you take this matter very seriously, and in Christ's name I implore you to do so. In so doing I have presumed that you are a true Christian who desires to bring honor to the Lord Jesus. I know it is a bit lengthy, but as Research Assistant to the President of Dallas Theological Seminary I am sure you are an avid reader and will also have a vested interest in understanding this issue.
To your question, "There are hundreds of millions of people in the world who do not know the name of Jesus Christ; don't we have something better to spending our time on (like sharing the Gospel with the lost)," I would reply that I probably spend at least as much time as you do (if not more) outside the walls of our church trying to win the lost to Christ, but if we are attempting to win the lost to a Jesus that doesn't mind sharing His church with the state, then we are leading them to a different Jesus (2 Cor. 11:4) than the one described in scripture, the Jesus who is to be the "head over all things to the church" (Eph. 1:22), and who is the "head of the body, the church: who is the beginning, the firstborn from the dead; that in all things he might have the preeminence" (Col. 1:18). The Jesus of the Bible who shed His blood for His church both demands and deserves the place of preeminence in His church Mr. Wiesepape; He not only commissions us to make disciples but also demands that we "hold fast" His name (Rev. 2:13). 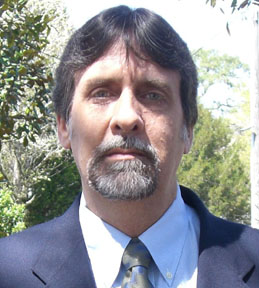 Pastor Sam Adams of Independence Baptist Church, Belleview, Florida
In actuality, your position as it applies to the church (or local churches) is quite idolatrous, as I will attempt to explain. Just as no man can serve two masters, neither can the church. The Lord Jesus bought and paid for the church in His own blood, and made it quite clear that we are not to give to Caesar that which clearly and exclusively belongs to God (Matt. 22:21). Rome allowed religions of all kinds, but the reason Christianity was outlawed was because Christians were the only sect that refused to allow Caesar jurisdiction over the church or to say "Caesar is Lord." They refused to seek "licit" from Caesar or allow Caesar to license their churches as Luke recorded: "these all do contrary to the decrees of Caesar, saying that there is another king, one Jesus" (Acts 17:7), for which they were cruelly martyred. Today's churches in the U.S. have betrayed both Christ and the blood of the martyrs in doing exactly what the martyrs refused to do. The issue is really two-fold: (1) is the Lord Jesus the sole head of His church, and (2) is the Bible the sole authority in Christ's church for faith and practice. When a church becomes a tax-exempt corporation it literally surrenders in both of these areas. Mr. McGough wrote:
I have done a study into this subject. The I.R.S. "Publication 557" under Religious Organizations it states 2 guidelines:
(1) That the particular religious beliefs of the organization are truly and sincerely held.
(2) That the practices and rituals associated with the organization's religious belief or creed are not illegal or contrary to clearly defined public policy.
I have difficulty in understanding how a person who believes that "Jesus Christ is the way the truth and the life and no one comes unto the Father but by him" could agree with this. Why should I or anyone be willing to agree with something like this that clearly states we will not say anything that goes against "public policy." "Public policy" has not down through the centuries agreed with the true faith in Christ. Why do the churches and pastors and maybe Dallas Theological Seminary agree with this.
Your first reply stated:

Dear John,
Thank you for contacting Dallas Theological Seminary. We and other institutions like ours can adhere to these guidelines since there is currently no public policy in place which makes it illegal to profess John 14:6. If this ever became a public policy, then we would let go of our tax-exempt status. There has never been a public policy in the history of the United States that has not allowed a "Religious Organization" to confess "true faith in Christ." Thus the issue you raise is beside the point because it is an issue that does not exist, and if it did then we would let go of our tax-exempt status.

Your second reply restated your position:

Dear Mr. Weispape:
Thank you for finally responding as you said you would do last December. Your response, though common, is nonetheless very shallow and disappointing coming from one in your position. Mr. Weispape: THIS IS NOT A ROMANS 13 ISSUE. This is not an issue of to obey civil government or not to; THERE IS NO LAW requiring churches to organize as state-controlled corporations to seek tax exemption. That is done VOLUNTARILY, and doing so unequivicolly makes the state the head of the church. Perhaps you did not read my email in its entirety, or perhaps you simply refuse to see the gravity of the issue. While you said you discussed this with Dr. Bailey and Dr. Swindoll I would like to know if they read my email or Dr. Boys' treatise that was sent to you, or if they just heard your reduction of it. Your position as stated is a denial of Christ's exclusive authority over His church, which is a denial of His name. In effect you are going beyond the position taken by the German Christians who used Romans 13 to justify submission to Hitler; you are taking the same position as those who were asked, "shall I crucify your king?" Their response was essentially the same as yours: "We have no king but Caesar." I hope you will prayerfully reconsider this issue at least for yourself if not for Dallas Theological Seminary.
Pastor Sam Adams
Independence Baptist Church
Belleview, Florida
(Editors Note: The IRS does not require churches to be incorporated for tax-exemption but they strongly encourage it. However, most churches in America are either incorporated or are organized and operate as corporations and are treated as such by the IRS.)
If you would like to have our Trumpet newsletter, the voice of the unregistered (sp) church movement in America, send me your e mail address at drgregdixon@earthlink.net.