Join-Us | Log-In
Freedom Forum | Translate
One of the things that is necessary for the fairly immediate future is starting a garden.  It is yet another step in freeing yourself from the sinking dollar.  While few people could entirely feed their family from a garden, you can certainly supplement your income, have a potential to know where at least some of your food is coming from.  And for a few, you can create a surplus that can be sold in Farmer's Markets or bartered with friends.
I probably should have started planning in early January.  But better late than never.  And it is that first step that prepares us for next year.

What kind of garden?  The edible kind of course.  But what form of garden?  I studied various approaches and finally decided The New Square Foot Garden method (SFG) made the most sense to me.

This is essentially a box garden in which ALL of the soil is provided by the gardener.  It has the advantages of being weed free (except that brought in on the wind), high efficient yield per square footage, readily allows variety of crops coming to maturity at a variety of times.  No longer is a single thing coming to fruition in long strait rows at the same time.  You no longer have a huge crop of a single item on your hands and little time to eat, preserve or give it away.

You optimize the soil.  And you grow a variety of vegetables, vining fruits and herbs. All on a small plot.

The disadvantage is the initial cost of the rich soil is expensive.  That is pretty much it.  If you already have a compost heap even this cost is minimized.

The creator of this method, Mel Bartholomew, has been proselytizing and refining his method for around forty years.  And he has condensed it into a pretty readable and usable book.  But you can pretty much get what you need in ideas and planning from his web site link above.

First is planning. I will skip some of Mel's more philosophical ideas.  He can tell you those in his book and his web site. But the things that seem important to me are his concept of four foot garden boxes.  Why four feet?  He envisions four foot square garden boxes with a three foot wide path around them to allow full access to every square inch of the garden.  I agree with the four foot-wide idea as well as the three foot working space on either side.  Two feet is the maximum you can readily reach for planting, weeding, watering and harvesting.  But you can make the box garden as long as you wish to maximize garden and minimize land usage.

The second big thing, beyond building the garden, is making the soil.  So called Mel's Mix, consists of three things:  A blend of 1/3 (by volume) peat moss, 1/3 vermiculite (course) and 1/3 compost (the latter being a mixture of 7-8 commercial compost sources -- if you don't have your own -- to ensure a wide variety of composting materials).  This is a loamy fluffy, rich, water retaining, readily draining weed seed free soil.  It is reused year after year forever with an small annual compost addition.

The garden container is pretty much either an elevated box to a four walled 6" high (generally) container upon which a weed/grass barrier is lined, good drainage is provided, and then 6" of Mel's Mix is shoveled in and smoothed off.  Then heavily watered.  One square foot areas are mapped out.  And then planting begins.

Depending upon the plant in one, four, nine or sixteen plants per square foot.  Further, some are suitable for transplant, some directly from seeds.  Most of these crops will grow in just six inches of soil.  Obviously some need one foot (ex: carrots, parsnips).

Some crops require special support from the wind and the weight of their crop.

Some are suitable for vertical gardening --- that is vine crops.  Growing in the third dimension.  Mel's box setup is particularly useful for both trellis gardens, but wind barrier, pest barrier, "green housing" to start crops earlier and grow them later and where I live shade barrier.

Some crops are annual, others perennial, some are partially harvested over several weeks.  Some will last many weeks or even months under proper harvest and storage conditions.  Others are finite.

Some are let go to seed for future crops.  But Mel's process if so efficient you use 2-3 seeds per plant.  So a packet of seeds is often a five year supply.

And Mel likes to recycle components and build on the cheap.  There is nothing fancy about his method.  It is well suited to the homeowner.

It is also well suited to the apartment dweller who may have limited space and the need to grow indoors as well.


So where do I differ from a classic SFG?

I started with the larger one.  It has a sewer access port present.  You heavily water the area you are going to dig up a couple of days before to make the digging easier. 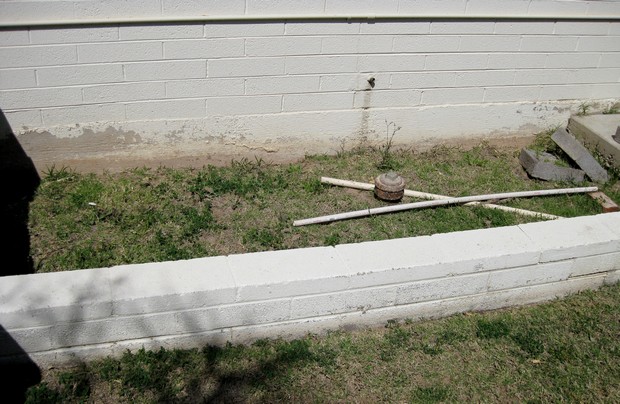 Removed the grass layer.  Smoothed it out. 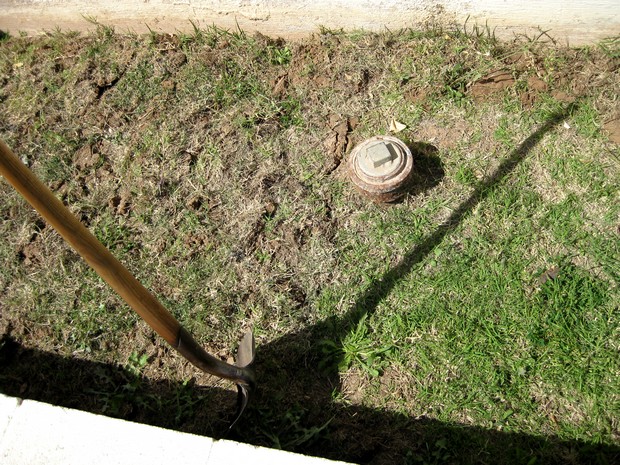 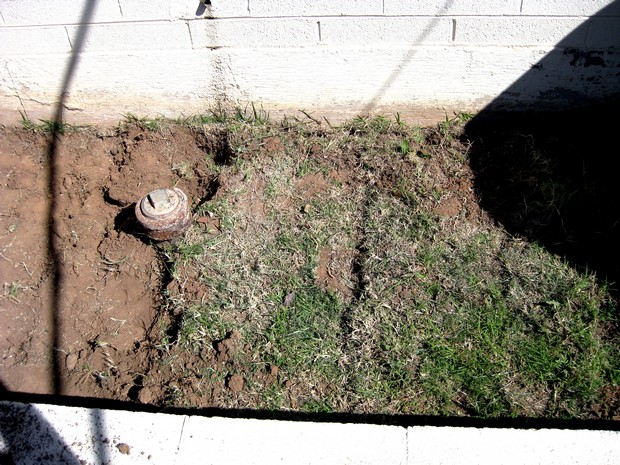 Laid down a sheet of  weed blocker.  Mel has taken some flack for this non-biodegradable but well working item.  Greenies may want to use newspaper lining.  I am sure it works as well, but I am not sure how well newspaper drains. 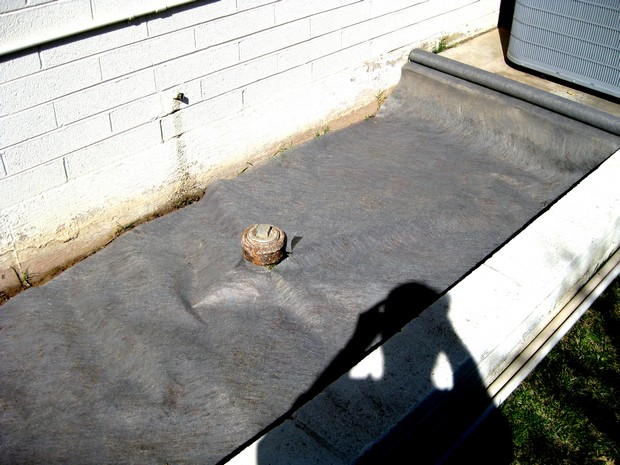 Mix the Mel Mix.  Has to be done on a windless day.  Big tarp.  Shovel, rake. Minimal water spraying to keep down dust. 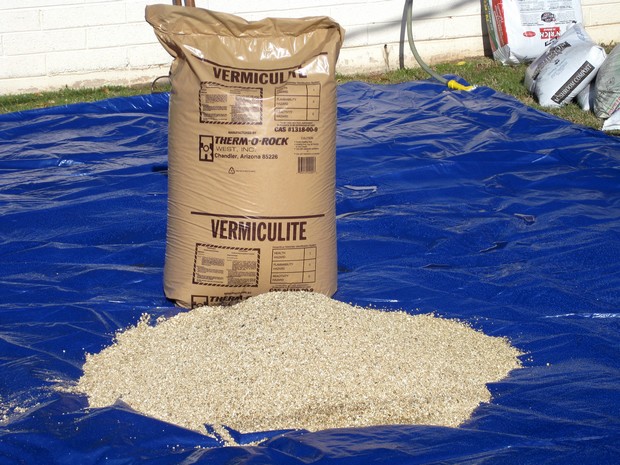 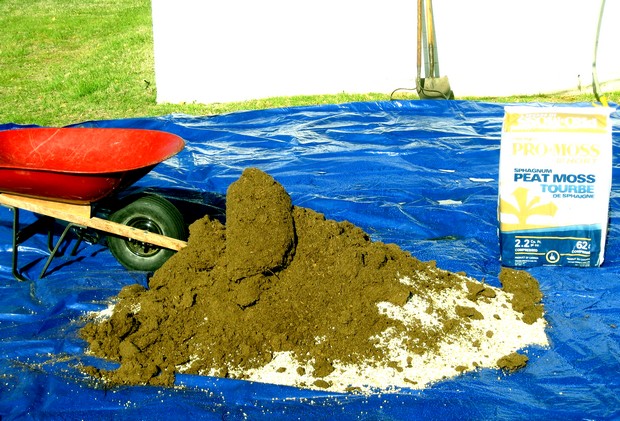 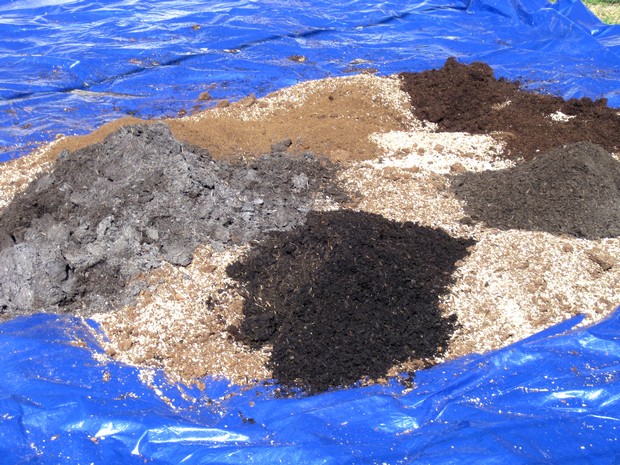 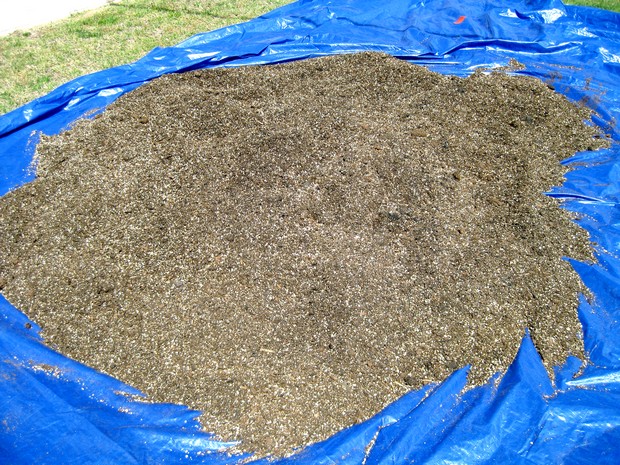 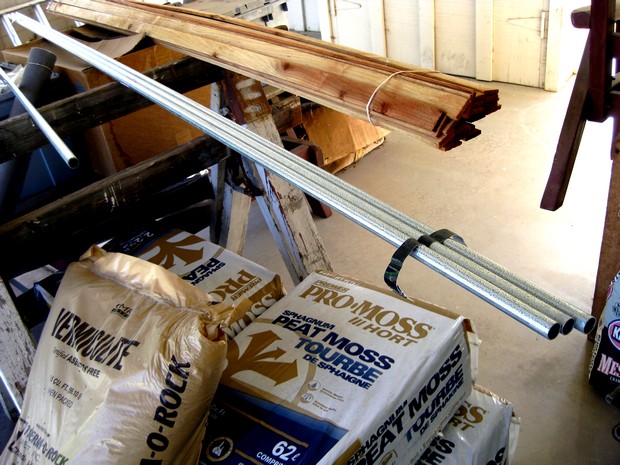 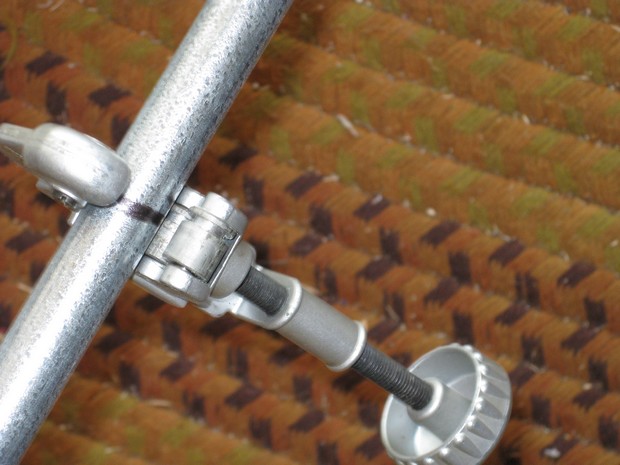 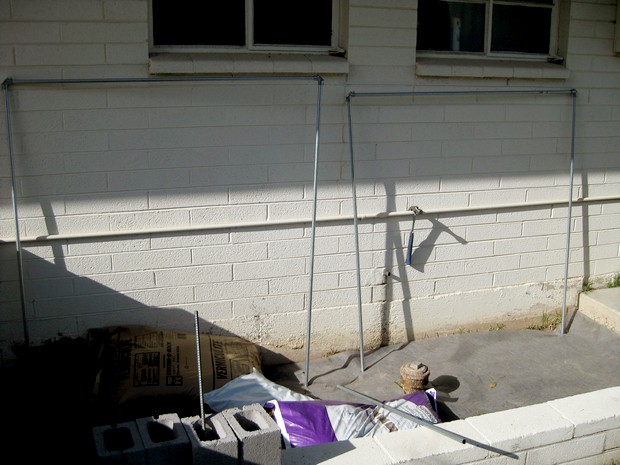 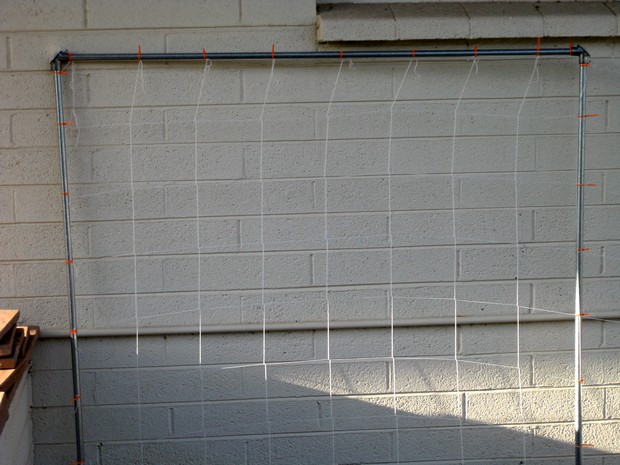 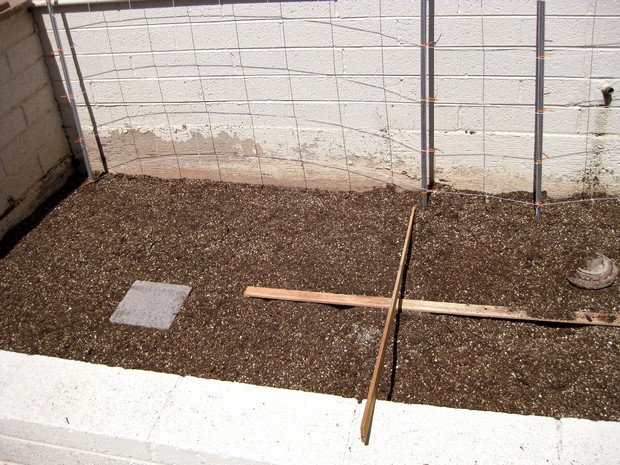 Laying out square foot grid. PVC and anti-bird net to protect the seedlings. 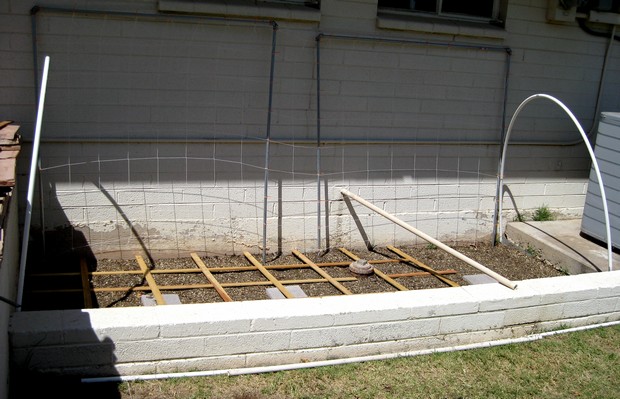 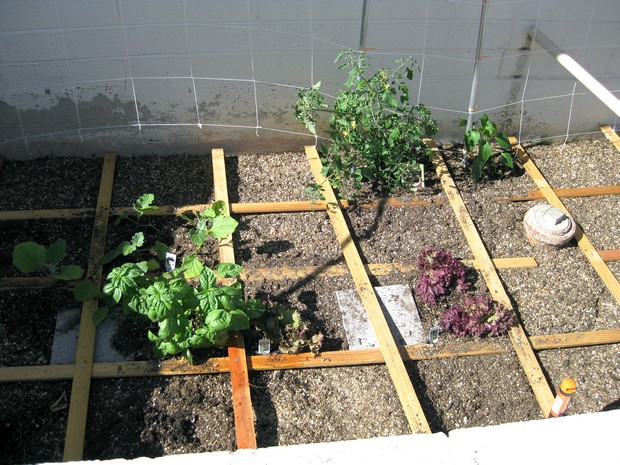 For the area I live in I now have to consider heat protection from concrete block and direct sunlight....I will add to my report on this.  Is it possible to grow crops in Phoenix summers?  A few vegetables yes, but most...we will see.  Misters?

I decided to forgo including a drip (bubbler) irrigation system and use Mel's hands on approach. I now regret that.  Automatic irrigation in the morning and summer mid aftrnnon would be a godsend.

It is really important to have three feet clearance on either side of a four foot garden.  My use of this already present four foot area is a pain in the ass for weeding (Bermuda grass still comes up around the back wall where weed blocker doesn't block well), planting.  The trellis would still be mounted in either the back or middle.

I gave up a few square feet with 8" block steps to get into the back areas of the garden. It is now clear to me I wish I had used 12" square blocks 6" or more high and I need a few more.  They need to occupy the square provided by the grid.

Special boxes for special crops.  Examples: Corn box that provides wind support for growing stalks.  Asparagus box -- annual crop.  Potato and peanut box.  Blackberry/Raspberry boxes up off the ground so the roots can't establish themselves in your yard.  It strikes me that chain link fences make good trellis for berries and grapes.  Smaller boxes for establishing crops in areas where crops are not usually grown.  Small herb indoor boxes by windows.

3/4" water pipe trellis and strong webbing might be interesting for trying to grow full sized watermelons up off of the ground.

Preserving crops is now a consideration.

While not SFG, fruit and nut trees promise low maintenance after four years of care.  March is usually typical planting time.  And I like the EZ-trees designed to top themselves out at 10 feet which is my ideal for a fruit tree.  While a tall almond, pistachio, pecan or walnut tree might provide wonderful summertime home shade as it hits 25 feet in height if it is planted just right.  Some trees require a male.  Others fruit better with another same species in the area.  Some varieties will put on fruit early, some late providing longer crop times.

4 Comments in Response to Every revolutionary needs a garden

In the '70's I grew a garden in my bermuda grass backyard by laying a piece of black plastic, using a flat shovel to make v shape in the ground and tucking in the edges and stomping it down good so the plastic couldn't come out.  Then I cut x's in it where I wanted plants and grew tomatoes, squash, cucumbers and whatever I wanted.

Neat, thanks for the link. We're planning on doing some gardening experiments this year (with an eye toward serious production with in the next couple years) and it's always good to have more information : )

This is my second year gardening. I took some cheap gardening classes through the Phoenix Permaculture Guild http://www.phoenixpermaculture.org/ They have classes all the time in gardening, rainwater reclamation, beekeeping, raising chickens, you name it. I also got a book on preserving and a big pressure canner that I used to can tomatoes and peppers. Weeds are a problem but I mulched heavily and that seems to help. Good luck!

Envy.... to the point of ripping off your ideas :)

Donna just dug up our garden and is going to planters that can be moved. From what we learned I think we can be much more productive with a smaller area like you are doing. And the SUN is a bitch here in the Summer. We'll be by to check out your work and take a class.

Stop buying butter! Do it yourself! Only 1 ingredient needed

Farm Tour Series: The Walipini; Use, Design, .and Construction