Join-Us | Log-In
Freedom Forum | Translate
"The truth is, there is no Islamic army or terrorist group called Al Qaida. And any informed intelligence officer knows this. But there is a propaganda campaign to make the public believe in the presence of an identified entity representing the 'devil' only in order to drive the TV watcher to accept a unified international leadership for a war against terrorism. The country behind this propaganda is the US . . ." - Pierre-Henri Bunel, Former French Intelligence Officer 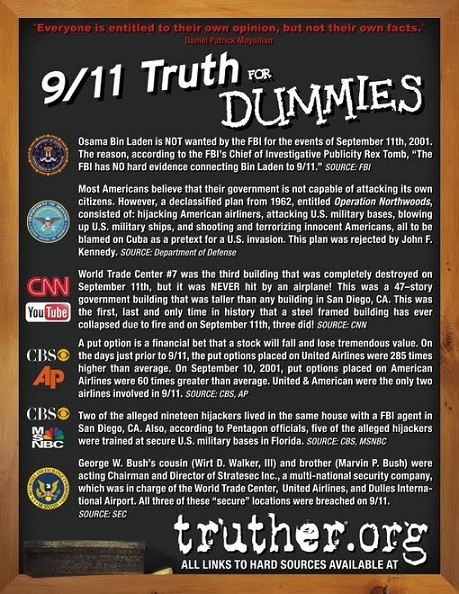 This 911 Memorial Day, ten years after, will be heard from every corner of the country. The media will emphasize the emotional horror and avoid the reasons that have transformed our native soil into an armed camp of distrust and despair. No matter where you come down on the multiple explanations about the actual attack on lower Manhattan and the Pentagon, or who was really behind the planning and execution, one fact is indisputable. Namely, that NOTHING good has happened in the last decade for ordinary citizens or for the quality of life of the nation. The America of our birth is history. The police state of homeland security is the true terror. The government of bipartisan dictatorship is the essential dread. The cultural denial of objective reality is the final death.

In order to place the significance of the September 11, 2001 into context with the help of hindsight, one can review the numerous accounts that deal with every imaginable aspect of the excuse that rationalizes each higher level of tyranny committed in the name of a mystical goal of national security. Viewing an account like, 9/11 Is the LitmusTest is a strong contender of establishing the perspective and circumstance that the official 911 report wants you to ignore. However, an examination of an initial response published the day of the treason, demonstrates that little enlightenment has touched the minds of those who continually serve the empire. When Will America Learn? - Squarely exposes the destructive internationalist foreign policy that only advances the interests of fifth column globalists that scheme to destroy the last remnants of our constitutional republic.

Gravity is one of the most powerful forces in the universe. But it pales in comparison to the insanity that festers in the American Psyche. Wholesale denial will be the legacy of the horror that struck our Nation today. The root cause for evil - lies within each of us. When its ugly head rises to a height that all can see, we tend to ignore our own complicity. Blame the perpetrators as criminals, as well we should; but most neglect to look within themselves for their unwillingness to confront depravity.

Acceptance of insane Foreign Policy in the name of Patriotism breeds the ultimate reaction that nature provides. Who among us are surprised? Is there anyone left that can honestly say that America is NOT viewed with the greatest contempt among the most disgruntled elements of terror? Terrorism is wrong. Violence is not justified. But it will become the typical pattern, as long as JUSTICE is viewed through myopic lenses.

It has long been argued that neutrality in Middle East Policy is in the best interest of America. Today that contention is no longer debatable. Continued support for Israel has brought the plague to our shores. It is not only our first-born sons who were slaughtered. The lamb of innocence died in the heap of rubble that is now New York City.

When the zealot, favors the prospect of death to peaceful coexistence; the consequences can only inflict the most dreadful outcome. The jihad against the infidel is a direct result of an unholy alliance with a country that inflicts their own form of terror upon a native population. Neither party has any high ground of morality. Both are equally responsible for the suffering and death that this blood feud imposes on a region and now our own land. It is payback time and we are unwilling to recognize our responsibility for this debt.

When your leaders wear the mantle of the Zionist, your children will pay. It does not make it right, but that is the tragic reality of blind support for interests that are not our own. Moral outrage is hypercritical when it has been denied for decades. Balance in official policy has never existed, nor has prudence in our own self-interest.
Those who wave the 'bloody flag' are the preceptors of mass suicide. Today's causality list will be relegated to an asterisk, when the nukes start to explode. If the world community seeks to unify their 'New World Order' upon the bodies of terrorists that they constructed, we will surely create the seeds of martyrs, for future generations.

When the Ford's, Haig's and Eagleburger's call for swift and strong retribution, be forewarned that the war against America will only intensify. This is not an issue of manhood, but one of endorsing a cause that conflicts with ours. What benefit will any of us see when the landscape of more of our cities resemble that of lower Manhattan?

Will you people ever get it? Or will it take the funeral of your family to paint the picture for you? If you purport to be patriotic, your duty is to stop support for Israel. Their fight is not yours, but we will pay for their sins. Does this make sense to you?

America will cease to exist when a public whose emotional naiveté will scream for retribution will readily accept totalitarian measures! Folks, the enemy is us; for our involvement in the creation of hostilities that seeks to obliterate our symbols of 'Pax American'.

Israel is not an ally, but is the cause of our sorrow. Wake up America, and divorce this soiled maiden. Does anyone share the pain of the Arab children that are suffering and dying from the one sided policy of U.N. enforcement? Until you acknowledge that Zionism has equal blood on its hands, you will bleed on your own flag.

The future is NOW! Moreover, what you decide will shape its course. It is time for an American First Foreign Policy, that will repudiate the role of a policeman for the world. Think before you demand pay back, for it will blow up in your own face. Recognize the real cause that threatens our country and way of life. Abandon the nation founded on guilt. Blame the terrorists for the body count and hold them accountable. But remove the reason for their hate. If you were part of the fourth world, you just might become your own freedom fighter.

America was suckered into WWII with the treachery of Pearl Harbor. Do not repeat this same mistake and let DEFCON ONE turn into a mushroom cloud that will engulf more than Wall Street. All life is sacred. Resist allowing America from falling into the trap of a domestic created form of Terror. Demand and establish Justice, and Peace will follow.
SHALOM

Our economy is in meltdown. Exercising our freedoms are condemned as expressions of terrorism. Troops serving the transnational corporatist interests are used as, tools or targets, for butchery. The NeoCons and now the NeoLibs, betray every loyal American for their Talmud masters. Those who are unable to distinguish between Zionist rulers and expendable Jews or Israelis, share the same mental disease, as those who buy into the Al-Qaeda 911 myth of Islamic mastermind terrorism. The elites that further their global empires are quite eager to exterminate American, European, Jewish and Moslems in their quest for total supremacy.
911 is simply the best example of efficient and accelerated mind control that furthers the public demand for an increased and intensive totalitarian response for an imaginary threat. Sacrificing natural rights is patriotic for the modern day flag wavers of an evil government.

Hell is now the new normal. Government bureaucrats follow orders because they care more about their career than their integrity. The corporate titans suck up all the government contracts that bribes can buy. Making hay from the security revolution is big business. World Peace is sold short because the shekel is the dominate force that drives the foreign policy express.
Paleoconservatives are not fools. They understand the nature and extent of the corruption and treason that allowed the 911 diversion to kill our liberty and expand the American gulag. The Old Right were champions of an American First Foreign Policy during the last World War. The coming next global conflict will be fought from an easy chair by electronic drones that eviscerate whole societies with the flick of a joystick.
If you ignored the conclusion in the September 11, 2001 - When Will America Learn? - essay, what chance do you have now to discover the insidious lies that underpin the entire state sponsored war of terror. Read the 911 a saga of deceit and lies site for valuable resources from the first five years of the 911 truth movement.
Ten years after, the fools that populate popular culture produce even more committed political sycophants. Abandoning rationality, while defending the indefensible is their badge of pride. Yet, the lessons of fabricated deception are not lost on everyone. Hopefully  you count yourself in this group.

This country will never survive a 20th anniversary of 911. The current police state will become the permanent prison of war stalag encampment because you dare express your Bill of Rights civil liberties. The true terrorism is domestic to the core and resides in a government gone bad.
SARTRE – September, 11, 2011

Discuss or comment about this essay on the BATR Forum