Join-Us | Log-In
Freedom Forum | Translate
The following information is being distributed by Radio Liberty over the Internet as a warning that there are forces at work in our beloved America and around the world to create a universe that is quite different than any of us can possibly imagine, one in which over six billion souls would be deliberately destroyed to produce what the conspirators consider their "paradise lost."  Following is one of the most well kept secrets that has been sitting in the public's eye for over thirty-one years. 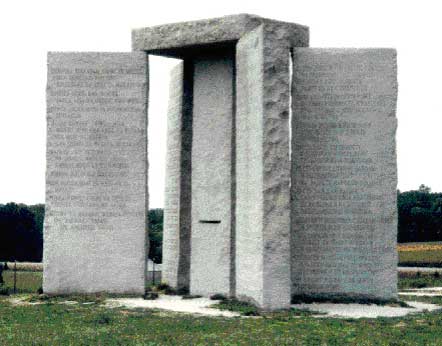 "The American Stonehenge"
The Georgia Guidestones
"On one of the highest hilltops in Elbert County, Georgia stands a huge granite monument. Engraved in eight different languages on the four giant stones that support the common capstone are 10 Guides, or commandments. That monument is alternately referred to as The Georgia Guidestones, or the American Stonehenge. Though relatively unknown to most people, it is an important link to the Occult Hierarchy that dominates the world in which we live.
The origin of that strange monument is shrouded in mystery because no one knows the true identity of the man, or men, who commissioned its construction. All that is known for certain is that in June 1979, a well-dressed, articulate stranger visited the office of the Elberton Granite Finishing Company and announced that he wanted to build an edifice to transmit a message to mankind. He identified himself as R. C. Christian, but it soon became apparent it was not his real name. He said that he represented a group of men who wanted to offer direction to humanity, but to date, almost two decades later, no one knows who R. C. Christian really was, or the names of those he represented. Several things are apparent. The messages engraved on the Georgia Guidestones deal with four major fields: (1) Governance and the establishment of a world government, (2) Population and reproduction control, (3) The environment and man's relationship to nature, and (4) Spirituality.
In the public library in Elberton, there is a book written by the man who called himself R.C. Christian. The monument he commissioned was erected in recognition of Thomas Paine and the occult philosophy he espoused. Indeed, the Georgia Guidestones are used for occult ceremonies and mystic celebrations to this very day. Tragically, only one religious leader in the area had the courage to speak out against the American Stonehenge, and he has recently relocated his ministry." 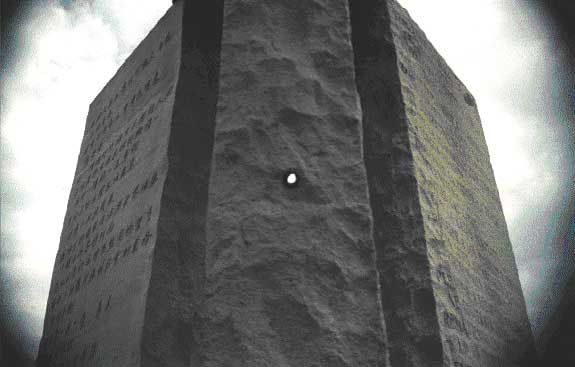 The engravings on the tablets of the Guidestones deal with world government, population control, environment, and spirituality
THE MESSAGE OF THE GEORGIA GUIDESTONES
1. Maintain humanity under 500,000,000 in perpetual balance with nature; 2. Guide reproduction wisely - improving fitness and diversity; 3. Unite humanity with a living new language; 4. Rule passion - faith - tradition - and all things with tempered reason 5. Protect people and nations with fair laws and just courts; 6. Let all nations rule internally resolving external disputes in a world court; 7. Avoid petty laws and useless officials; 8. Balance personal rights with social duties; 9. Prize truth - beauty - love - seeking harmony with the infinite; 10.Be not a cancer on the earth - Leave room for nature - Leave room for nature.
"Limiting the population of the earth to 500 million will require the extermination of nine-tenths of the world's people. The American Stonehenge's reference to establishing a world court foreshadows the current move to create an International Criminal Court and a world government. The Guidestones' emphasis on preserving nature anticipates the environmental movement of the 1990s, and the reference to "seeking harmony with the infinite" reflects the current effort to replace Judeo-Christian beliefs with a new spirituality.
The message of the American Stonehenge also foreshadowed the current drive for Sustainable Development. Any time you hear the phrase "Sustainable Development" used, you should substitute the term "socialism" to be able to understand what is intended. All of this is consistent with the "Earth Charter" compiled under the direction of Mikhail Gorbachev and Maurice Strong. In that document you will find an emphasis on the same basic issues: control of reproduction, world governance, the importance of nature and the environment, and a new spirituality. The similarity between the ideas engraved on the Georgia Guidestones and those espoused in the Earth Charter reflect the common origins of both.
Yoko Ono, the widow of John Lennon, was recently quoted as referring to the American Stonehenge, saying:
"I want people to know about the stones ... We're headed toward a world where we might blow ourselves up and maybe the globe will not exist ... it's a nice time to reaffirm ourselves, knowing all the beautiful things that are in this country and the Georgia Stones symbolize that. "
What is the true significance of the American Stonehenge, and why is its covert message important? Because it confirms the fact that there is a covert group intent on (1) Dramatically reducing the population of the world; (2) Promoting environmentalism; (3) Establishing a world government; (4) Promoting a new spirituality.
Certainly the group that commissioned the Georgia Guidestones is one of many similar groups working together toward a New World Order, a new world economic system, and a new world spirituality. Behind those groups, however, are dark spiritual forces. Without understanding the nature of those dark forces it is impossible to understand the unfolding of world events.
The fact that most Americans have never heard of the Georgia Guidestones or their message to humanity reflects the degree of control that exists today over what the American people think. We ignore that message at our peril.
The Age of Reason was a book written by Thomas Paine. Its intent was to destroy the Judeo-Christian beliefs upon which our Republic was founded.
The hole that you see in the stone was drilled in the Center Stone so that the North Star could be visualized through it at any moment. This was one of several requirements stipulated by R.C.Christian for the building of the American Stonehenge and reflects his obsession with the alignment of the stars, the sun, and the moon. Occultists often worship the alignment and movement of heavenly bodies as part of their religious ceremonies."
Interesting Facts about the American Stonehenge
Astronomic Features
1. channel through stone indicates celestial pole.
2. horizontal slot indicates annual travel of sun.
3. sunbeam through capstone marks noontime throughout the year
Sponsors: A small group of Americans who seek the Age of Reason
Time Capsule Placed six feet below this spot - On? To Be Opened on?
The words appear as shown under the time capsule heading; no dates are engraved.
Physical data
On the right side of the tablet is the following column of text:
PHYSICAL DATA
1. OVERALL HEIGHT - 19 FEET 3 INCHES [5.87 m].
2. TOTAL WEIGHT - 237,746 POUNDS [107,840 kg].
3. FOUR MAJOR STONES ARE 16 FEET, FOUR INCHES [4.98 m] HIGH, EACH WEIGHING AN AVERAGE OF 42,437 POUNDS [19,249 kg].
4. CENTER STONE IS 16 FEET, FOUR INCHES [4.98 m] HIGH, WEIGHS 20,957  POUNDS [9,506 kg].
5. CAPSTONE IS 9-FEET, 8-INCHES [2.95 m]  LONG, 6-FEET, 6-INCHES [1.98 m] WIDE;  1-FOOT, 7-INCHES [0.48 m] THICK. WEIGHS 24,832 POUNDS [11,264 kg].
6. SUPPORT STONES (BASES) 7-FEET, 4 INCHES [2.24 m] LONG 2-FEET [0.61 m] WIDE. 1 FOOT, 4-INCHES [0.41 m] THICK, EACH   WEIGHING AN AVERAGE OF 4,875 POUNDS [2,211 kg].
Guidestone languages
Below the two columns of text is written the caption "GUIDESTONE LANGUAGES". The names of eight modern languages are inscribed along the long edges of the projecting rectangles, one per edge. Starting from due north and moving clockwise around so that the upper edge of the northeast rectangle is listed first, they are English, Spanish, Swahili, Hindi, Hebrew, Arabic, Chinese and Russian. At the bottom center of the tablet is the following text:
Additional information available at Elberton Granite Museum & Exhibit, College Avenue, Elberton, Georgia. 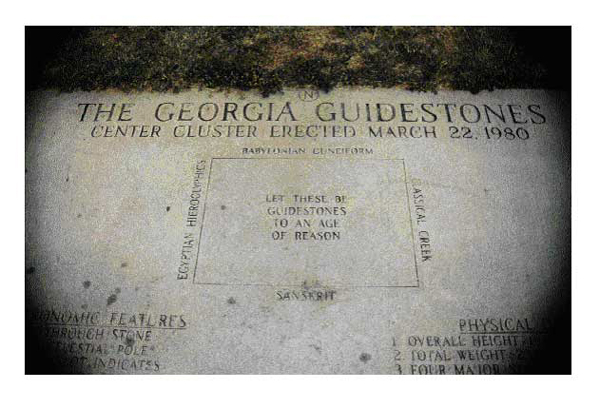 Lately there has been found a lot of evidence that Gilgamsh of "The Epic of Gilgamesh" is really none other than Nimrod of the Bible.

When you Google search "Gilgamesh Nimrod" you come to several good websites that explain how Nimrod was the father of war against God. This war started with his city of Babylon (tower of Babel - before the Babylon of Nebuchadnezzar), and is still going strong today.

The Revelation in the Bible shows what Babylon is doing in our present time. And it also shows the one who destroys Babylon. In addition, it explains, in chapter 19, the ONE who will destroy the destroyer of Babylon. This stuff is happening right now!

Consider how Babylon is being destroyed right now, who its destroyer is, so you can look for help to the ONE who destroys the destroyer of Babylon. Look, before it is too late.

Greg Dixon? When is the voice of reason going to come from someplacwe that we can reasonably expect to be non-biased and "reasoned"? It really tires my a-- that every time I hear some con artist spout anything that even comes close to what the "keepers" are hell-bent on doing to the world and its slaves, cattle, I mean people, it is perverted by religious or other mythological references.

As for Thomas Paine, dead, he's smarter than Dixon.

Just who is Mr. Dixon warning? I've been on about the New World Order for over forty years and can't say that anyone has listened. People are sheep; they don't and won't do anything to save themselves from much more than an increase in their media bundle expediture for the month. This country and the world are not going to hell on their own. Most of the 6 billion that Dixon is so very worried about, are on the front lines of the second greatest sell-out and long con in the history of (wo)man- kind.

Just for the record, religiosity is a major part of the problem. May the Great Pumpkin forgive me. (I'll likely be TP'd for eternity for that one.)

It's an unfortunate reality that we - homo sapiens - want to understand everything, but have no inclination toward doing the heavy lifting to find the truth. We also are champions of the "quick fix" and "easy out", and we'd rather believe in snake oil than snakes and oil. It seems that it's a lot less work and takes so very little effort to follow myth and slight-of-mind to the promised land than to understand that there might be a real solution or functional alternative. (Hell, it might even be that we are not capable of understanding everything, especially things that aren't real in the first place!)

Can someone please tell me why this is rolling thru Kentucky?

The Mark of the Beast Has Arrived