Corrine Vinopol, PhD, is a worker in the New Economy and president of her consulting company, IDRT.  Here’s a photo from her website: 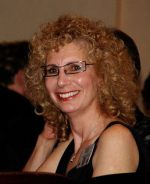 The website says that she “has extensive knowledge and experience in the applications of technology for educational product development particularly with federal mandates for Section 508 accommodations compliance.”

No doubt a nice and smart lady, she is one of millions of workers in the private sector who make a living from ever-growing government regulations and mandates.  You’ll see other examples momentarily.

Consuming 12% of national income, regulatory compliance is one of the three “industries” that make up the New Economy. The other two industries are:

Government, which now consumes about 40% of national income at the local, state and federal levels.  In 1947, it consumed about 22%.

Financial services, which had grown from 10.9% of gross domestic product in 1950 to 21% in 2006.  Much of the growth was based on phony money--on leverage on top of leverage and not on real assets produced from real work.  This industry’s share of GDP has dipped somewhat because of the recession, but given its clout with both political parties, the dip will be temporary.

By contrast, manufacturing, which is part of the Old Economy, has dropped to 12% of GDP.

A similar shift to government and finance happened during the decline of the Spanish, Austria-Hungary and British empires.

In a rare instance of personal prescience, I saw the New Economy coming to the USA in 1992, when I published a management book on bureaucracy and walked away from a lucrative corporate career due to having to spend too much time on government-required paperwork instead of work that helped my employer and fellow employees grow and prosper.

The New Economy is characterized by make-work instead of real work, by

the shuffling of money and paper instead of the production of valuable goods and services, by the living off of old wealth instead of the creation of new wealth, and by the free market being replaced by a deadly combination of crony capitalism, corporatism, mercantilism, and socialism.

It’s at this point in my commentaries that readers begin asking what can be done about these trends.  I’ll answer the question later, after saying a little more about the New Economy.

The epicenter of the New Economy is of course Washington, D.C., which, unsurprisingly, has remained largely immune from the recession and housing bust.  The New Economy also can be seen in “revitalized” downtowns across the country, where warehouses, factories, wharfs, freight yards, and working-class taverns have been replaced by Potemkin villages of lofts, light rail, subsidized sports stadiums, coffee shops, fusion restaurants, and other places that cater to workers in the New Economy--workers who are insulated from the economic harm caused by their environmentalism and statism.  Then, in a case of mass cognitive dissonance, these same economic elites say they are concerned about the declining wages of working stiffs.

Even firms that appear to be in the Old Economy are actually in the New Economy.  J. Berra Engineering is an example.  The company publishes a “Crisis Management Plan” for school districts and claims that 12% of the nation’s 15,000 districts are clients.  Here is an excerpt from its website:

The current 5th Edition of the Crisis Management Plan for Schools® includes the response procedures that are compliant with the NIMS-National Incident Management System and the ICS-Incident Command System as initiated by Homeland Security Presidential Directive-5.

On February 28, 2003, the President of the United States issued Homeland Security Presidential Directive-5 (HSPD-5) called the “Management of Domestic Incidents”, which directs the Secretary of Homeland Security to develop and administer a National Incident Management System (NIMS). The NIMS system includes the ICS system.

Imagine little Megan being asked in grade school what she wants to be when she grows up.  “I want to be Directive-5 expert,” she answers.

As promised, I’ll switch now to what can be done to transform the New Economy back to a real economy and encourage little Megan to grow up to do real work.

You already know what has to be done to rollback government.  Since most government spending is on entitlements, welfare and subsidies, voters simply have to vote to stop getting free stuff for themselves from the government.  Easy, huh?

Shrinking financial services is a more complicated matter, because it would require an end to crony capitalism, corporatism, and mercantilism.  It also would require the transformation of the cartel of the Federal Reserve and its big banks into a truly competitive system based on private capital, personal risk instead of socialized risk, and sound money (or even private currencies) tied to precious metals.  Since neither President Obama, nor the leading Republican candidates, nor 98% of Congress are talking about these solutions or even understand them, the first step, then, will be to form a new political party.  Easy, huh?

Stopping the growth of the regulatory state will be much more difficult than the previous two easy fixes.

First, as can be seen in the example of Directive-5, even if the federal bureaucracy were cut to zero, the president could still entangle the economy in red tape on his own.  Second, bureaucrats are hermaphrodites who can reproduce alone and in the dark.  As such, they will breed new bureaucrats unless you keep them under 24-hour watch.  Third, the majority of your fellow Americans love the regulatory state, because they are worrywarts who think that all risk can and should be taken out of life and because they are busybodies who want to tell others how to live.

For example, worrywarts and busybodies such as the nation’s First Lady think that if they tell obese Americans that broccoli is healthier than Cheetos, the fatties will switch to broccoli.  Accordingly, the worrywarts and busybodies support food labeling regulations, including regulations governing restaurant menus.  These regulations have spawned an industry of labeling experts, including “Food Label News,” a subscription newsletter.  Below is a sample from the publisher’s website of the kinds of questions and answers that can be found in the newsletter.  I’ll sign off here and let you digest the implications of the growth of such businesses in the New Economy.

Question:  What should a serving size be for a retail baking flavor? There are so many uses from cookies to smoothies, which would have significantly different serving sizes and nutrition information?

Answer:  The Code of Federal Regulations (CFR) does not include a specific reference amount customarily consumed (RACC) for baking flavors. FDA’s Food Labeling Guide in section L62 includes suggested RACCs for a number of product categories not included in the CFR. Products marketed as flavor substances for baking would most closely resemble flavoring oils with a suggested RACC of 1 tsp (__g).

In this scenario, it would be helpful to consumers to include a second column within the Nutrition Facts that shows nutrition information for other intended uses (such as smoothies).

Mencken’s Ghost is the nom de plume of an Arizona writer who can be reached at ghost@menckensghost.com.