The following graph is from the Grandfather Economic Report, which has been published for many years by Michael Hodges, who deserves national acclaim for his efforts in trying to warn his fellow Americans that their 100-year spending spree was going to end in economic disaster.

The graph compares peace-time spending over the last 140 years, for all levels of government as a percent of gross domestic product, between the United States and the average for 16 other major industrialized and democratic nations.  The chart reflects direct government spending and not the cost of complying with government regulations.  (In the USA, compliance costs consume about an additional 12% of GDP.) 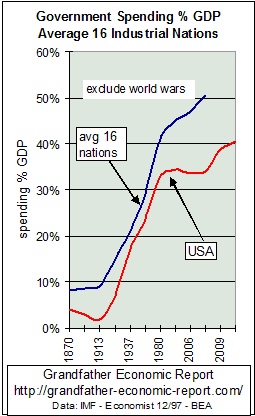 The gap shown above between the USA and the other countries can be explained by national healthcare, which most of the other nations have but the USA doesn’t have.  ObamaCare, or whatever the Republicans might hatch to replace it, will close the gap.

The graph shows that self-government works about as well as permissive parents buying cases of soda and bags of candy and potato chips and then pleading with their children to watch their weight.

For adults, fiat money is the equivalent of soda, candy and chips for children.  It is a case of cause and effect and not simply a coincidence that federal spending began to accelerate in 1913 with the birth of the Federal Reserve and its printing presses.  It was a similar story in other countries.

However, the national printing press doesn’t explain the phenomenal growth in state and local governments.  There are now three times more public-sector workers per 100,000 citizens at the state and local levels in the USA than there were in 1946. Much of this growth is explained by federal mandates, but a lot of it is also explained by citizens voting for additional government services way beyond the essentials of law enforcement, courts, public health, and public infrastructure for sewers, water and roads.

Public education accounts for over a fourth of state spending.  You probably know the putrid numbers:  Per-pupil spending has tripled in constant dollars over the last 40 years, class sizes have shrunk, test scores have flat-lined, and dropout rates are over 30% in inner-cities, thus revealing the big lie that public education is necessary for achieving universal education.

When asked to explain this inconsistency, Republicans mumble platitudes and run away.  At least Democrats are consistent in their love of collectivism.

Medical care exceeds even public education in runaway spending.  Medicare at the federal level and Medicaid and Kids Care at the state level are superhighways leading to the financial cliff of national bankruptcy.  Yet, as every Republican politician can attest, they would be boiled in prune juice if they attempted to disabuse their elderly constituents of the notion that they deserve government medical care because they have paid for it.  In fact, the average Medicare beneficiary gets much more in medical care than what he paid in Medicare taxes.  Not only that, but the elderly also allowed the government to rob the Social Security trust fund and now feign surprise that it only contains promissory notes.

In spite of these and other dire trends, nearly half of voters say they will vote for President Obama, a lunatic who wants to let even more red ink flood and sink the ship of state.  And other than Ron Paul, who has been characterized as a lunatic by the Republican political, military-industrial, and talk-radio establishments, none of the Republican presidential contenders has a platform that might reverse the trends.

Self-government is better than authoritarian government and even Plato’s Utopia, but it is based on the assumption that voters are adults and not snotty, sniveling, self-centered children.  The above graph shows how fallacious that assumption is.

Mencken’s Ghost is the nom de plume of an Arizona writer who can be reached at ghost@menckensghost.com.