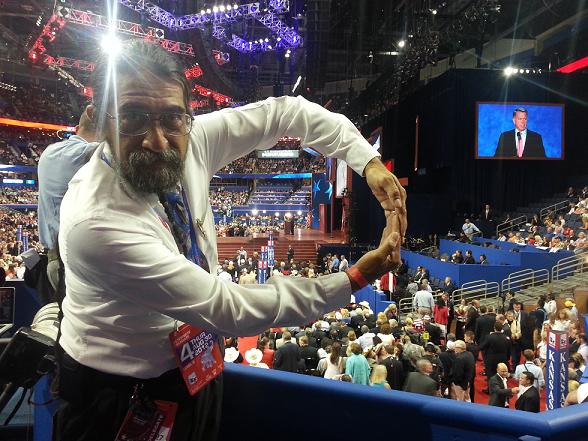 It has been ten days since I landed at Phoenix Sky Harbor Airport returning from an incredible week in the beautiful state of Florida.  The demands put upon my body and mind have definitely taken their toll, and I have slept more than I can ever remember.  Trying to slow down my food intake has been difficult after days on end of buffet-type meals that offered plentiful helpings of some of the most sumptuous meals I have ever tasted.
But what a week.
First, I spent over thirty-five hours with fourteen young people in a van going from Phoenix through Tucson to Tampa, and was cramped with a bad back and slept only about thirty minutes the first day and an hour the second.  Upon arrival at the Campgrounds with PaulFest already under way, I hit the shower, cleaned up, and worked a nine-hour shift as LT doing security.  After a room mixup at 2:30 a.m. with my Brother Michael Maresco, we had to go to another hotel because my name ‘wasn’t on a list’.  Story of my life lately.  It was either five or six hours and I was back at it for the second day.
Due to a mixup, I ended up sleeping in the van Saturday night, even though I had a room reserved.  I split off from everyone I knew and checked in to my ‘Host Hotel’ for the Convention on Sunday because I was going to be at the RNC Reception at Tropicana Field come hell or high water, and tried my damndest to get as many Delegates and Alternates to do the same so that we could possibly sway others to abstain; but the prospect of Dinner and a photo op with Ron Paul was too tempting for many and by the time it was over, we had made contact with maybe thirty of us just inside the stadium entrance.  Out of twenty thousand people.  From there, it was back to the Hotel.
Having been a National Delegate to Conventions in 2008 and 2010,  as well as the Arizona Voting Delegate at the historic Continental Congress in 2009,  I am fully aware of how these types of events go, and time is the shortest resource there is.  It’s critical that when you get together with people on a National level, networking and seeing old and good friends as well as making those all-important new ones take almost as much weight as the follow-through of planned strategies.  And you had better know the rules.  Robert’s Rules of Order that is.  That is the ‘accepted’ rules overseeing political functions such as these.

In the case of Tampa, ‘strategies’ were of no value as the current Republican Power Base had already decided on a course of action that undercut input from any faction that was not in accord with the unopposed nomination of the ‘Presumptive Nominee’ Former Governor Mitt Romney.

And the ‘rules’ be damned.

If I went into fine detail regarding all that I have witnessed in Tampa, it would amaze and astound you; but my Publisher and good friend Ernest Hancock would yell at me “You’re BORING me to death – get to the point!”  Well Ernie, the point is they did whatever they felt they needed to provide the ‘viewing audience’ with an uncontentious formality – nominating Romney and Ryan to the GOP ticket - with all the fanfare that could be mustered.  Make them Dems quake in their boots.  Too bad they lacked the finesse required to actually pull it off.  (I’ll go into greater detail at a later date for those I know that are interested in the tidbits – Ed).

Suffice it to say, it was a ‘botched job’ in the minds of most law-abiding self-respecting self-proclaimed American Patriot – yours truly included.  But you see, the difference is, this isn’t the first one of these kinds of farces I have experienced.  I’ve been bamboozled by ‘The Party of Principle’ before being guided into the GOP by the Good Dr. Paul.  I was there working for a real Libertarian – Nobel Prize winning Dr. Mary Ruwart – when I got Bob Barr and Wayne Allyn Root shoved into my ‘Party at the time’s’ Pres and VP slot.  Gee, thanks.  Are you with me so far?
So now here I am, Republican to the hilt after ditching the LP in time to make the Precinct Committeeman deadline and have voting rights at the upcoming AZGOP State Convention.  I have gone up through the ranks from LD to CD to County to State, and (in spite of being buried in the RP Camapaign’s Slate) actually got enough votes on name recognition alone to be an Alternate Delegate going to the Republican National Convention in Tampa.  I’m in the door!  Good.  That’s all I need to start with – clearance to participate (observe!)  I have the ear of enough Delegates to be able to assist in making some progress.  Had we actually done any ‘business’, I’m sure I could have.  But it was not to be.

The only really good luck I had the whole trip was since a lot of the young people I rode with to Tampa was only there for PaulFest, they drove the van back before I left the RNC.  Because of this, Revolution Travel Management put me up in a hotel for Friday night (with people I knew) and I flew home Saturday.
At this point in time, I have accumulated more than enough data, and am working on setting up some kind of meeting between GOP Leaders from both the State and National Level, and those who have been damaged; namely the Delegates/Alternates at both the State and National Level that supported Congressman Paul.  It is only proper for there to be an open and civil discussion regarding the events in Phoenix, Arizona at the AZGOP State Convention, and the events that occurred at the RNC in Tampa.
As of yesterday, I have stepped down as Organizer of the Phoenix RP MeetUp Group, and AZGOP Delegate John Laurie has stepped up to fill the position.  It is time for the youth to firmly grasp their dreams and desires and go for them, and I believe John is a good man for this task.  I wish him all the luck in the world.

For me, there is no ‘going forward’ in the political arena until questions can be asked, answers can be provided, and people stand up and be accountable for their actions.  I have the promises that this meeting WILL be happening, and I expect those promises to be followed through – because I am NOT going away, and problems need to be straightened out IMMEDIATELY.
The consequences are dire in my personal estimation.