Join-Us | Log-In
Freedom Forum | Translate
Gold and silver prices were down sharply this morning in the face of dramatically lower lease rates. What does that mean? It means that hedge funds and such can lease gold and silver at reduced rates and therefore have greater incentive to do so. They can then sell their leased metals and invest the proceeds in other markets. In other words, welcome to the gold carry trade. 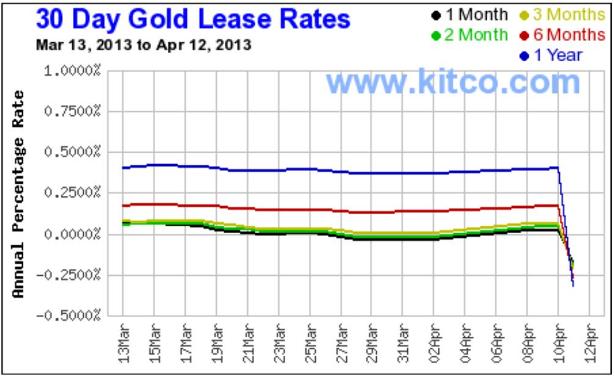 If you happen to manage a hedge fund you now have incentive to borrow someone's gold at a NEGATIVE interest rate. Then you can sell that borrowed gold into the market, then invest the proceeds in some other market during the term of the lease. You're betting that you can buy back that gold for the same or less when the lease is up, plus make money on whatever you invested the proceeds in.
The net effect is that there is a much greater incentive to join in this gold carry trade and it increases the downward pressure on the gold price as this leased gold is then sold into the market. The question is who or what determines the gold lease rate? The free market or certain manipulative interests? Think "bitcoinbillionaire".
================================
How The Gold Market Was Crashed
Bill Downey - www.goldtrends.net
http://www.gold-eagle.com/editorials_12/downeyb041313.html

Informed speculation as to how the present Gold market crash was engineered. Simply raid the futures while blocking access to the spot market, silly. Then sit back while the stops are tripped and the margin calls go out.
"The banks and brokers are open all weekend and as long as it takes to go through all the accounts and issue all the MARGIN calls.

If they get the margin calls out by Saturday, the customers have 24 hours to get more money to their brokers. If the money is not received by Sunday night or Monday morning, the positions will have to be liquidated, just when the market is at its lowest liquidity and the longs have had all weekend to think about it and the media has had time to tell everyone that the bull market in gold is over."
================================
Assault On Gold Update
http://www.prisonplanet.com/assault-on-gold-update.html

"The Shanghai Metals Exchange sports a significant useful practical Gold price spread, higher than the posted London and New York price. It has opened the door for arbitrage for the last two months or more. My firm suspicion is that the BRICS Development Fund will convert USTreasury Bonds by means of the Shanghai window, thus draining the London centers of their gold bullion."

NASA On The Cusp With $967 Million Mission To Weird 'Psyche' Asteroid...