The Roman Catholic Church was guilty of many abuses in Europe all through the Middle Ages, and I think the people of Europe had good reason to walk away from it. But as they did, they made a massive error: They didn’t replace it with anything better. 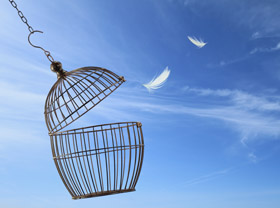 The Church, regardless of its errors and crimes, taught virtues to the people of that continent. Medieval Europe became home to a culture founded largely on some very positive values, and you can’t deny that the Church had a hand in that development.

After all, not everyone involved with the institution was corrupt and abusive (in fact, such villains were the minority). A significant percentage of local priests, monks and nuns were decent, caring people, trying to help the people of their diocese. However many and evil the inquisitors were, the number of kind and decent clergy was higher, and they had their effects.

Europe’s error was that they didn’t just reject the Church; many of them rejected everything that was associated with it. The virtues that the Church taught, however poorly, had given Europe a moral core. Those virtues should have been preserved.

Are there things that we, in our disgust for the state, might foolishly throw away, like many Europeans did with their cultural virtues?

Honesty, I couldn’t think of much.

A lot of us, from the Tannehills to Murray Rothbard to myself and many others, have written about justice in the absence of state force. That’s pretty well covered.

Roads and fire protection are simple too, and they’ve been covered as well.

The one thing that I could think of beyond these is a Bill of Rights.

A Great Concept, an Inadequate Term

Now, we all know that our US Bill of Rights is broken every day, but the principle is a good one, and the concept itself can be a useful thing.

These are rights that we demand and will defend.

The Rights of Free Men and Women

We hold these as inherent and inalienable human rights:

We are free to do whatever we wish, so long as we extend this same right to others. Every individual stands equal to any other person or group. We accept no person or group as inherently superior. No person or group has a right to aggress against us. We hold the right to defend against aggression. Our property is our own, and our will regarding it ought not to be opposed. Any person or group that attempts to counter our will regarding our property is an aggressor. Our sole obligation to others is to do no harm. Cooperation, compassion, and kindness are positive goods that we choose to bring into the world, but so long as we harm no one, we have committed no offense. We claim the freedom to trade, to express ourselves as we wish, to move and think as we wish, and to be free of surveillance. We will defend these rights, both for ourselves and for others.

I think we have a wrong perspective of the Bill of Rights. The Bill of Rights isn't for somebody else to follow to make sure that we are being allowed our rights by them. To think this way is to start to translate rights into privileges.

Rather, the Bill of Rights is there for us to constantly consider, so that when we monitor others, we know exactly what to compare them against. And if they are not following the BoR, we are to take action, first to inform them of their mistakes, then, if they won't change, to force them to change, or else execute them.

Any bill of rights is admirable, but as L. Neil Smith points out in Down With Power, without teeth (in the form of penalties) it is so much hot air.  Granted, in the bill of rights you suggest in this excellent article, there are built-in hints of person-to-person threats of retaliation, but what if the person(s) treading on my rights has both the ability and the resources to dwarf my ability and resources to retaliate?  There can be no argument that Clinton, both Bushes, and Obama have not only robbed me but have deprived me of many, in not all of my rights "guaranteed" me in the first ten amendments as well as any personal rights in the body of The US Constitution.  I cannot physically retaliate.  And the vile beasts of hell occupying SCOTUS will prohibit me from any legal retaliation.  (The people named here are only the tip if the huge iceberg that is our corrupt government.)

What Are The Judeo-Christian Principles?

As The Oligarchy Creates A New Group of Revolutionaries

The West That Was, Part 4