"But he seemed so nice and normal!" How many stories about psychopaths and serial killers include a comment similar to that? The problem is that a lot of sadistic monsters know how to feign compassion and humanity when in public, when the cameras are rolling, but when they are alone with their victims their true selves are revealed. Another problem is that positions of "authority"—politician, police officer, etc.—are magnets for sociopaths. And when someone who likes to hurt others gets into such a position, that makes him far more dangerous.

Consider the case of Cheryl Yurkowski, a young mother living in Ontario, Canada. After an argument at a nearby restaurant involving herself, her husband and her husband's mother, she comes home and goes to bed. Her husband comes home separately and, being intoxicated, and not knowing that Cheryl is already at home in bed, he is yelling on the phone. A neighbor calls the Kawartha Lakes police department, and Sargent Janette Drew and officer Mark Ryan Donaldson show up.

Fast forward a bit, and Cheryl is battered and bruised—having suffered nerve damage, and having been choked nearly to death (all at the hands of the police)—now locked in the back of a police car, alone with officer Donaldson who is shaking his fist in her face and telling her that he will do everything in his power to make sure she never sees her four-year-old daughter, Sophia, ever again.

You might be wondering, how in the world could that be the outcome of that situation? The underlying answer is simple: sociopaths with badges. The following video fills in the details of what happened in between. 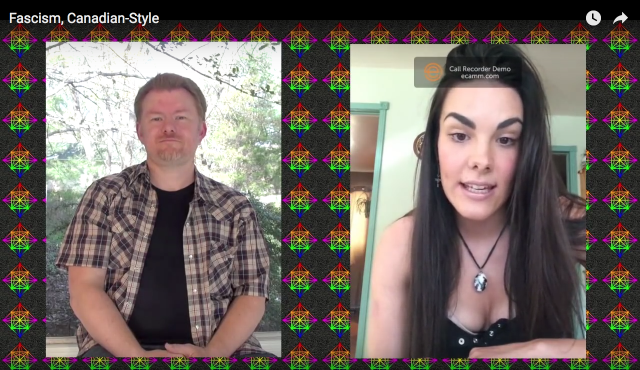 This is just one more example of "peace officers" (a label they still use up in Canada) escalating and aggravating a situation, violating their owns laws, instigating violence, and then punishing the victim. And that punishment is ongoing. While this article is being written, the police and their prosecutor accomplices are still trying to have Cheryl caged for a long time.

If you woke up to find an armed stranger (with or without a badge) in your young child's room, wouldn't you do almost anything to make them leave? If someone was ripping your shoulder out of the socket, might you bite them to try to make them stop? Well, those are the only "crimes" that Cheryl is being prosecuted for: trying to resist the illegal, unwarranted intrusion, trespass and violent assault committed by badge-wearing thugs named Janette Drew and Mark Ryan Donaldson. Not content to merely be bullies, these sadistic cowards are now trying to use "the system" to punish the victim for having had the nerve to try to protect herself and her daughter from their abuse.

Cheryl is a friend of mine, and an outspoken proponent of non-aggression and a voluntary, stateless society. So even though I only know her from Facebook, and even though she lives hundreds of miles away from me, this hits close enough to "home" that I feel compelled to do what I can to remedy this injustice. And no, dropping the charges—while obviously imperative—will not be enough. Not by a long shot. Stopping a bully from victimizing one innocent is not going to stop him from being a bully to others. Bullies will be bullies unless and until they personally have something to lose.

When sociopathic thugs become "law enforcers," they know that their victims will almost always be on the defensive, stressed out and desperately trying to save their own necks from the inhuman machine of the state "justice system." Having threatened, assaulted, and almost killed Cheryl, officer Donaldson can now smugly sit back and watch his fellow gang members adding insult to injury by trying to cage Cheryl for months, if not years. Thug Donaldson knows he has nothing to fear from the system. That's why people outside of the system need to give him something to fear. Frederick Douglass said it very well:

"Power concedes nothing without a demand. It never did and it never will. Find out just what any people will quietly submit to and you have found out the exact measure of injustice and wrong which will be imposed upon them, and these will continue till they are resisted with either words or blows, or with both."

For now, I will try words. For starters, I want the gang of thugs that calls itself the Kawartha Lakes Police "Service"—and especially their chief, John Hagarty—to feel the heat of the righteous anger of decent people everywhere who have had enough of the fascist abuse dished out by cowardly sociopaths in blue. Yes, this is only one story of authoritarian abuse, among many millions worldwide. So why not make it one story of the people making things right?

I would strongly urge everyone to write or call, and in additional to whatever else you want to say, ask if they have dropped the bogus charges against Cheryl yet, and ask whether Thug Drew and Thug Donaldson have been fired yet.

1 Comments in Response to Sociopaths in Blue

Former Law Enforcement Officer Death Bed Confession: We are Coming for You America