Join-Us | Log-In
Freedom Forum | Translate
What do Bill Gates, the Rockefellers, and Oggie Dog have in common?
Answer: They are all aware that GMO frankenfood will kill you.
It all started with my dog Oggie eating a large quantity of sheep wool. Not just any sheep wool, but my endangered Jacob’s sheep wool. I thought this was rather strange, but took it in stride, and doused him with oil and fiber until the wool clump came out. I thought about what would entice him to eat this, since he has not done it before, but chalked it up to weird things dogs do after Marti found a missing hair curler in her dog Milo’s poop.

Now Oggie Dog has been raised on dry dog food, and he is over 10 years old. I have not had problems with this diet until about a year ago when he started getting finicky about the type of dry food he would eat. I attributed this to his age. After all, I am getting a bit finicky too, but that’s another story. Then it hit me after reading William Engdahl’s Seeds of Destruction. What if most of the dry dog food we get in the grocery store is made from GMO products? What if Oggie senses the GMO in his food and is rejecting it because he knows it is bad for him? What if he ate the wool because it was preferable to GMO dog food? Animals instinctively know what is good for them. Well, all except Marti’s dog Milo who will eat anything. But again, that’s another story. So, I started doing some research on the Net, and here is what I found:

Pet food recall linked to GMO
http://www.saynotogmos.org/ud2007/uapr07.php#recall
On March 23, [2007], the New York State Department of Agriculture and Markets announced that rat poison in contaminated wheat gluten imported from China was responsible for the suffering and deaths of an as yet uncounted numbers of cats and dogs across North America. The poison is a chemical compound called aminopterin.

On March 30, [2007], the FDA reported finding a widely used compound called melamine in the suspect pet foods. The FDA claims the melamine was the cause of an as yet uncounted number of cat and dog poisonings and deaths. The FDA could not find the rat poison, aminopterin, in the samples it analyzed; however a lab in Canada, at the University of Guelph, has confirmed the presence of rat poison.

A brief internet search quickly reveals that the widely used insect growth regulator cryomazine is not only made from melamine, but it also breaks down into melamine after ingestion by an animal. Wheat gluten is wheat gluten, fit for human consumption, so the question remains, what was wrong with this gluten that it was only bought for use in pet food?

1.     The wheat gluten imported from China was not for human consumption, because, I believe, it had been genetically engineered.
2.     The 'rat poison' aminopterin is used in molecular biology as an anti-metabolite, folate antagonist, and in genetic engineering biotechnology as a genetic marker. This could account for its presence in this imported wheat gluten.
3.    The contaminant melamine, the parent chemical for a potent insecticide cyromazine, could well have been manufactured WITHIN the wheat plants themselves as a genetically engineered pesticide. This is much like the Bt. insecticidal poison present in most US commodity crops that go into animal feed.
4.      So called 'overexpression' can occur when spliced genes that synthesize such chemicals become hyperactive inside the plant and result in potentially toxic plant tissues, lethal not just to meal worms and other crop pests, but to cats, dogs, birds, butterflies and other wildlife; and to their creators.

How else can one account for samples of pet food containing as much as 6% melamine? It was surely not mixed in such amounts when the wheat gluten was being processed, but rather was already in the wheat, along with the aminopterin genetic marker. My suspicion is that the FDA was aware that the gluten came from genetically engineered wheat that was considered safe for animal consumption.

In a nutshell, it is the researcher’s opinion that the recalled pet food contained GMO wheat gone bad. That is to say, a great deal of our pet food is normally made with GMO wheat imported from China. This particular batch went hyperactive and produced a toxic amount of genetically engineered poison in the wheat, and killed our pets.

Good boy, Oggie Dog! You sniffed out the GMO in your food and thumbed your nose at it. At least that is my theory. By the way, Here are some GMO testing results from Moscow that I don’t think the U.S. wants us to see: 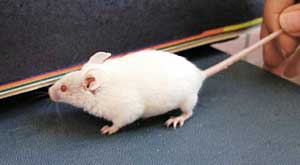 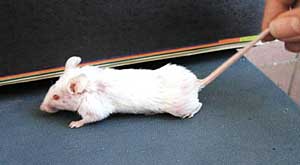 That Jacob’s sheep wool doesn’t look so bad, does it Oggie Dog? In fact, just about anything looks better than GMO dog food.

A few years ago, life was good for the fake meat industry.