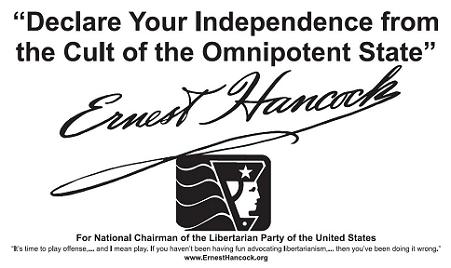 www.ErnestHancock.org
http://www.lp.org/issues/platform_all.shtml#sop
Statement of Principles
The next LPNews will start hitting mailboxes in a week. This ½ page ad is the starting gun for a full on debate about the role of the Libertarian Party of the United States of America in the coming political revolution that we are just starting to see the beginnings of.
I have been a libertarian freedom activist for over a decade in a half and have been a close witness to the results of the current path the LPUS has been on for most of that time, and have engaged in advocating active engagement against the ‘Bad Guys’ on a national level while demonstrating what can be done on a local level that regularly has had national effect.
In 2004 Libertarians from around the country were first introduced to what me and my supporters thought would be the most productive direction the LPUS should take. The effort for National Chair in 2004 was our introduction at the convention in Atlanta and was the beginning of our current effort. The production of the Western Libertarian Alliance newspaper that was distributed then was an example of opinion and ideas that would encourage the freedom movement towards the effective advancement of freedom. The complete newspaper in PDF can be read here http://westernlibertarian.org/paper/WLA%20Complete%2032pg%20low%20res.pdf
By 2006 it was very clear that the Libertarian Party of the United States of America was no longer an effective tool in the advancement of freedom. The most productive individuals, generous benefactors, state Libertarian Parties and organizations were not being served by the LPUS’ existence. Coordinated efforts to strip the LPUS of its most effective traits did more damage and left the field wide open for a filling of the void only months later by Ron Paul’s campaign (which I strongly support as another very effective mind freeing effort that serves us all). Again, I did my best to make my positions very clear in an off Presidential Election year. I hoped to gain even more credibility by being very clear about what I saw was in our near and distant future and what the choices were that needed to be made and why. My message going into, and at, that convention was… http://www.strike-the-root.com/61/hancock/hancock1.html
My efforts, and those of my supporters, for the May 2008 Denver LPUS Convention is to make it very clear what we envision the role of the Libertarian Party to be in order for it to have very powerful influence in the advocacy and the attainment of liberty. My personal efforts, and those of others that share my goal of individual freedom, have demonstrated the ability to have an international impact using the uncompromising freedom message so closely associated with libertarianism and the Libertarian Party. But the association of freedom advocacy with the Libertarian Party is quickly fading and the use of the LPUS as an effective tool in the coming revolution between America’s ears is rapidly diminishing. At http://ernesthancock.org you’ll learn of my personal motivations for seeking this particular office of potential importance and what will be accomplished should I gain the support of the majority of Libertarians attending the national Convention.
Those that know me and have worked with me on past efforts,… I ask that you please take the time to endorse my effort here http://ernesthancock.org/Endorsements.htm. We have just completed the formatting needed and I hope that you would take the time to provide potential supporters with information that you think they should be made aware of as they begin to view my site for information about the National Chairmanship of the LPUS after the publication of the above ad.
This year we are doing our best to make sure that each delegate is fully informed of their choices before the convention with mailings and video productions. I may be contacting some of you for a short interview to help make several points that I feel are important. At the convention we will bring the expected enthusiasm (and show) that has come to be associated with Arizona Activism.
In the end, no matter what the vote totals are, it will be very clear what direction the Libertarians in Convention have chosen and why. It is this information that is of the greatest value to so many that have invested so much at a time so critical.
Peace,
Ernie
602 717 5900
P.S.S.S.S.S.S.
You can also support my effort with money http://ernesthancock.org/Contribution.htm:)