I am currently reading William Engdahl’s Seeds of Destruction, which documents the takeover of our global food chain by giant transnational agri-business concerns intent on enslaving the population through GMO technology. I am having difficulty reading this book because after a few pages, I become enraged at the colossal greed and corruption that exists in our corporate government, which has no problem murdering whole populations and eco-systems, and reducing the survivors to a life of abject misery and poverty. I find that after reading just a few pages, I have to put the book down, cool off, then pick it up again and read a few more pages before going through the cycle again. Anyway, as I was going through this cycle of reading, fuming, cooling off, then reading again, a thought occurred to me. What if the advent of Morgellons Disease has something to do with the ingestion of GMO foods? The timing seems to be rather coincidental, so I did some web research, and here is what I found.

Morgellons Disease – What is it?

Very little can be found regarding this disease. Originally, sufferers were told that their problem was imaginary. This was of little comfort to the people who were suffering.
Morgellons Disease sufferers report strange, fiber-like material sticking out of sores or wounds that erupt on the skin. This is accompanied by painful, intense itching, that has been described as “an ever present sensation as if something is crawling under the skin.”  (http://portland.indymedia.org/en/2006/08/344305.shtml)
On May 18, 2006, KGW, a local news channel reporting out of the Oregon area did this story:

[Dr. Drottar] The disabled family practice doctor felt like bugs were crawling under her skin.
"If I fully tell people what has gone on with me medically, they think they’re in the twilight zone,” said Drottar.
She woke up with the feeling that fluid was flowing just below her skin. Often black or blue hair like fibers protruded from her skin, she said.
“I thought I had been exposed to asbestos. I thought I was having asbestos fibers come out of my skin. I was pulling long, thin, small hair-like fibers that were extremely sharp that could literally pierce through my finger nails,” Drottar said.
In addition to the feeling of bugs and the fibers, Drottar also suffered from severe depression, chronic fatigue and a weakened immune system. As a result, she had to give up her family practice, Drottar said.
http://www.kgw.com/news-al/stories/kgw_051806_news_sweeps_strange_sickness_
morgellons.53b2569a.html
Here are some pictures of Morgellons lesions: 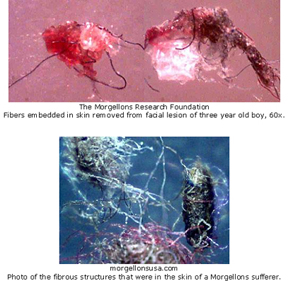 Morgellons and GMO – the Link

There is relatively little information regarding research correlating Morgellons with GMO foods. This is suspicious right off the bat, because it would seem that there would be a natural curiosity regarding a link between Genetically Modified Organisms that people ingest regularly and inorganic fibers that protrude from a person’s skin. This would be right up a geneticist’s alley, and quite worthy of intensive research. So, why aren’t there a ton of published studies? Why did I have a tough time finding anything related to this? Could it be that companies such as Monsanto have enough clout to effectively squash these stories? If they have enough clout to ruin countries by deceiving impoverished farmers into purchasing patented GMO seeds, then end up forcing these poor people to purchase these seeds year after year instead of harvesting their own, then I am sure they have enough clout to ask our more than willing corporate government to manipulate the press...again.

According to Mike Stagman, PhD,

“Genetic Engineering is a nightmare technology that has already caused MANY disease epidemics -- documented but unpublicized.”
(http://portland.indymedia.org/en/2006/08/344305.shtml)
Well Monsanto, you let at least one study slip through. With the help of a couple of search engines, I found an article by Whitley Strieber published on October 12, 2007, titled “Skin Disease May Be Linked to GM Food,” which concludes that the fibers taken from a Morgellons sufferer contain the same substance that is "used commercially to produce genetically-modified plants." Here is the article:
Skin Disease May Be Linked to GM Food
12-Oct-2007

Many people—and most physicians—have written off Morgellons disease as either a hoax or hypochondria. But now there is evidence that this mysterious disease may be REAL and related to GENETICALLY MODIFIED food!

The skin of Morgellons victims oozes mysterious strands that have been identified as cellulose (which cannot be manufactured by the human body), and people have the sensation of things crawling beneath their skin. The first known case of Morgellons occurred in 2001, when Mary Leitao created a web site describing the disease, which had infected her young son. She named it Morgellons after a 17th century medical study in France that described the same symptoms.

In the Sept. 15-21 issue of New Scientist magazine, Daniel Elkan describes a patient he calls "Steve Jackson," who "for years" has "been finding tiny blue, red and black fibers growing in intensely itchy lesions on his skin." He quotes Jackson as saying, "The fibers are like pliable plastic and can be several millimeters long. Under the skin, some are folded in a zigzag pattern. These can be as fine as spider silk, yet strong enough to distend the skin when you pull them, as if you were pulling on a hair."

Doctors say that this type of disease could only be caused by a parasite, but anti-parasitic medications do not help. Psychologists insist that this is a new version of the well-known syndrome known as "delusional parasitosis." While this is a "real" disease, it is not a physically-caused one.

But now there is physical evidence that Morgellons is NOT just psychological. When pharmacologist Randy Wymore offered to study some of these fibers if people sent them to him, he discovered that "fibers from different people looked remarkably similar to each other and yet seem to match no common environmental fibers."

When they took them to a police forensic team, they said they were not from clothing, carpets or bedding. They have no idea what they are.

Researcher Ahmed Kilani says he was able to break down two fiber samples and extract their DNA. He found that they belonged to a fungus.

An even more provocative finding is that biochemist Vitaly Citovsky discovered that the fibers contain a substance called "Agrobacterium," which, according to New Scientist, is "used commercially to produce genetically-modified plants." Could GM plants be "causing a new human disease?"

I don’t know about you, but I am done with processed foods from the grocery store. We are being hit in our most vulnerable spot – our bellies. Most people my age have been brought up with an innate trust that what they purchase from the stores is safe to eat. This is no longer true, since most processed foods contain genetically engineered ingredients. What you purchase from the corner store might just change your DNA and create such frightening symptoms that the general public simply does not believe it. What is worse is that when you go to the doctor to get help, he/she tells you what you are experiencing is all in your head. This is rubbish! It is up to people who care to make the correlations between what we eat and what happens to our bodies. Remember the old saying – “you are what you eat?” Well, I believe it is true.