America's silent killers are deadly, and do not discriminate. They target babies, the elderly, teenagers, young adults, middle-age housewives, and businessmen alike. They poison livestock, pets, and wildlife, and the people behind them deny complicity in the carnage. Who or what are these silent, deadly killers? They are the beautiful, green, uniform, and seemingly beneficial, killing fields of genetically modified (GMO) crops. The people behind them are the U.S. government, the Rockefellers, Monsanto, Dow, DuPont, and Syngenta.

Eugenics is a dirty word, yet particularly applicable to America's killing fields and their inception:

NSSM-200 also specifically declared that the United States was to cover up its population control activities and avoid charges of imperialism by inducing the United Nations and various non-governmental organizations to do its dirty work.

In 1970, Henry Kissinger said, "Control oil and you control nations; control food and you control the people." How do you control food? By consolidating agricultural interests into what was to be termed agribusiness, creating genetically modified organisms out of heritage seeds with funding from the Rockefeller Foundation, patenting the new seeds, and making sure that these new seeds are force-fed to U.S. farmers as well as the rest of the world. By holding the patents on these seeds and requiring farmers to purchase new seeds every year, the control is complete. Also, by controlling how these GMO seeds are created, other more sinister uses come to mind. But first, you must convince the world of your good intentions. This is accomplished through lies, deception, and a bit of media manipulation. By promising farmers that this technology was safe, and would result in increased yields at less cost, they were more than happy to give it a try. The fact that in most cases this claim was false had yet to be proven by the innocent farmers that believed the lie.

By the time independent studies started revealing that GMO is harmful, it was too late, and the freight train called agri-business was on its way to fulfilling its purpose - to make as much money as possible by spreading GMO seeds as far as possible, and thus gaining control of the population via food.

It is now 2008, and the U.S. is in the midst of a deadly trend. From time-tested agricultural processes that involve tilling the land, planting, and harvesting both produce and seed, to mass-produced, genetically engineered seed injection requiring less workers and more pesticides, agribusiness has taken hold and is strangling the country with its GMO crops and farming methods. The end-result? The family farmer is squeezed out in favor of agribusiness' mass-production methods using genetically engineered crops grown with poisoned seeds, good for one harvest only. Here are some statistics that show how GMO crops are taking over U.S. farmland:

The adoption of HT [herbicide-tolerant] corn, which had been slower in previous years, has accelerated, reaching 52 percent of U.S. corn acreage in 2007.

Adoption of all GE [genetically engineered] cotton, taking into account the acreage with either or both HT and Bt traits, reached 87 percent in 2007, versus 91 percent for soybeans. In contrast, adoption of all biotech corn was 73 percent. (USDA, 2007)

Not content to restrict the use of GMO to the U.S., a larger, more ambitious plan was in the making.

By Presidential Executive Order [1992], the US had defined GMO seeds as harmless and hence not needing to be regulated for health and safety. It made sure this principle was carried over into the new World Trade Organization (WTO) in the form of the WTO's Sanitary and Phytosanitary Agreement (SPS), which stated, 'Food standards and measures aimed at protecting people from pests or animals can potentially be used as a deliberate barrier to trade'...

Other WTO rules in the Agreement to Technical Barriers to Trade (TBT) forbid member countries from using domestic standards or testing, food safety laws, product standards, calling them an 'unfair barrier to trade.' The impact of those two US-mandated WTO rulings meant that Washington could threaten that any government restricting import of GM plants on grounds they might pose threats to health and safety of their population, could be found to be in violation of WTO free trade rules! (Engdahl, 2006)

This resulted in a long awaited plan by the multinational GMO pushers to take over global agriculture, as represented in the following chart that outlines just how many hectares of land were devoted to GMO crops from 1996 to 2006: 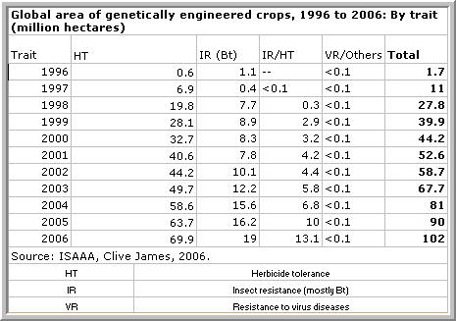 Take a good look at the chart above, and let's do the math. Keep in mind that all figures are approximate.

According to Science Daily, “grazing occupies 26 percent of the Earth's terrestrial surface.” 26% of earth's total landmass of 92,229,476 square miles = 23,979,664 square miles. So, subtract that from the total amount of land being used for farmland, and we get 12,912,126 square miles of farmland devoted to raising crops.

Of this total amount of farmland that is being used to raise crops, 393,828 square miles are devoted to GMO crop production as of 2006.

If you think that this trend cannot continue, think again. 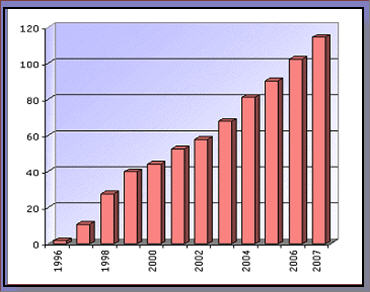 It looks like the agri-giants are right on schedule, with an average yearly increase of approximately 10 million hectares of land. The increase from 2006 to 2007 was 102 to 114 hectares. At this rate, the amount of land dedicated to the growth of GM killing fields will double in another 10 years.

Contrary to claims by the U.S. government and Monsanto et al, who claim that GMO crops are beneficial, independent studies have been conducted with shocking results.

In a 2005 report by Regnum, a Russian news agency,

On October 10, during the symposium over genetic modification, organized by the National Association for Genetic Security (NAGS), Doctor of Biology Irina Ermakova made public the results of the research led by her at the Institute of Higher Nervous Activity and Neurophysiology of the Russian Academy of Sciences (RAS). This is the first research that determined clear dependence between eating genetically modified soy and the posterity of living creatures.

“The morphology and biochemical structures of rats are very similar to those of humans, and this makes the results we obtained very disturbing,” said Irina Ermakova to NAGS press office. (Regnum, 2005)

Another glaring example is that of Syngenta and the German farmer, Gottfried Glockner of North Hessen. As William Engdahl explains in Seeds of Destruction,

This farmer found evidence that planting Syngenta Bt-176 genetically engineered corn to feed his cattle in 1997 had been responsible for killing off his cattle, destroying his milk production, and poisoning his farmland. Syngenta's Bt-176 corn had been engineered to produce a toxin of Bacillus thuringiensis, which they claimed was deadly to a damaging insect, the European Corn Borer. (pg. 230)

Evidently, Syngenta's GMO corn was deadly to a lot more than the corn borer.

Is Anything More Important?

To make a distinction between the health effects of GMO on animals and humans is reckless at best. If rats that eat GMO soy, and cattle that eat GMO corn have severe health effects and die, then what happens to humans that eat GMO soy and corn, drink milk from GMO-fed cows, and eat beef from GMO-fed cattle? Don't we deserve more? If GMO killing fields are poisoning the animals whose products we consume, then they are poisoning us also.

What does it matter about the issues we fight about if we are being slaughtered slowly and silently by the foods we eat? Not only are we being killed off, but the diseases that we get because of this consumption keep the medical establishment in Ferraris and Penthouses while doctors treat the symptoms of the diseases we contract, while never addressing the cause.

Can it be Stopped?

GMO killing fields are taking over our farms and stores, as well as our very lives. These silent, deadly killers have been hiding in anonymity since “1992...when George H.W. Bush...issued an Executive Order proclaiming GMO plants such as soybeans or GMO corn to be 'substantially equivalent' to ordinary corn or soybeans, and, therefore, not needing any special health safety study or testing” (Engdahl, 2006). Even labeling foods containing GMO ingredients is not allowed. With the proliferation of GMO ingredients, it is no wonder that companies do not want to be responsible for labeling their products. They probably do not know if what they are getting is GMO or not! How can you label something if you do not know what it is?

Planting individual gardens with organic seeds, then harvesting these seeds from one year to the next is one way to combat the GMO revolution. Also, local groups devoted to growing organic produce for the communities in which they live can stem the tide of personal GMO consumption one community at a time, at least for a while.

The U.S. government, Monsanto, Dow, Dupont, and Syngenta are not in business to keep people healthy. They are in business to make money. Unless this is understood, these corporations will continue using the public as guinea pigs for their experiments in population control, and in so doing, glean ever-increasing profits from the unsuspecting and naive. It is time to stand up and resist these giants by demanding accountability, and using what resources are left to become self-sufficient and say NO WAY to GMO! If we don't, America's silent killing fields will do their job, and we will no longer have a choice.

I am so glad that your experience turned out so well, and that you had the courage to do something about it. Thank you for the links. You wrote:

"Monsanto is the number one threat to mankind and if the American people don't wake up, take a stand and get loud, real loud. We will all end up too unwell/sick to do anything but see our doctors on a regular basis."

Our stores are chock-full of GMO, and it is difficult at best to find anything processed that isn't. I went to the feed store yesterday and asked if the feed corn was GMO. The sale's clerk had no clue, so I called the farmer. He had no clue, but said he would try and find out. I'm to call him back tomorrow or Friday. They both said I was the only one to ask that question. When will we all just start asking questions?

My experience with GMO foods has been devastating. My son became extremely ill and was placed on a nebulizer for years and required homebound educational services (teachers had to come to the home to provide school instruction for my son for years). Once I removed him from all GMO corn, soy, cotton seed, and canola my son's health slowly returned. I removed him from all additives including all hormones and antibiotics. My son now has made a full recovery our quality of life has returned. He has not needed a breathing treatment for over 18 months nor is he on any pharmaceuticals.

Monsanto is the number one threat to mankind and if the American people don't wake up, take a stand and get loud, real loud. We will all end up too unwell/sick to do anything but see our doctors on a regular basis.

These links are great for more information.

CONSPIRACY TO CONFIRMATION - Social Distancing For Collecting Our Electromagnetic Imprints