Join-Us | Log-In
Freedom Forum | Translate
In these times, there is gloom and doom in almost every article that comes from the pen of conservatives, religionists, political pundits of all stripes including Dem’s, GOP’s and all the rest of the political parties. Then throw in the global warming crowd and their fellow tree hugging snail darting bunch along with all of the other isms, asms and spasms. Frankly, who even wants to get out of bed in the morning? You’ve got an Egg McMuffin ulcer before you leave McDonald’s now, because they even have TeeVee’s in the dining area. And yet, in the midst of all of this defeatism, a small church in Indianapolis with less than thirty members took on the largest city in the State of Indiana with a population of one million, and with the help of the Phoenix based Alliance Defense Fund whupped up on the home of the 500 Mile Race big time. In Biblical language, what they did comes right from those powerful words found in the great hall of faith chapter of Hebrews where it says, “and by faith they subdued kingdoms.”
The City of Indianapolis didn’t want much from the little congregation. The city fathers just wanted them to bow down and recognize them as little tin horn gods and get a zoning variance or be fined $2500 per day. Pastor Anthony Digrugilliers said “No way,” stood on his First Amendment grounds, and won the day for Christ and Religious liberty. The following article by Pat Stegman, Associate Editor of The Trumpet Newsletter, tells the whole thrilling story in detail. Read it, and give thanks to the God of the Bible, the men who gave us the First Amendment, and those like Pastor Digrugilliers and the ADF who are still believe in it and are willing to fight for it.
“Victory Upon Victory”
Judge Barker Forced to Reverse Ruling
by Patricia Stegman
Pastor Anthony "Toby" Digrugilliers called it a "victory upon a victory" when his church won a zoning case brought against the City of Indianapolis. The US Court of Appeals for the 7th District remanded the case back to the U.S. District Court for reversal, giving Digrugillier and his congregation the right to assemble and worship in their existing location without the burden of applying for a zoning variance.
The Baptist Church of the Westside, a satellite of the Indianapolis Baptist Temple, has been leasing a small house located in a commercially-zoned neighborhood since July 2005. In February 2006, Indianapolis city officials sent a letter saying that the "religious use" of the property violated the city's zoning code. In order to meet at that location, officials explained, they would have to obtain special permission.
The city indicated that they would pursue legal action against the church, which could result in an injunction preventing them from worshipping in addition to fines up to $2,500 a day.
Pastor Digrugilliers, on behalf of the church, moved for a preliminary injunction to keep the city from shutting the church down while they proceeded with a court case based on the city's violation of the Constitution and a federal law known as RLUIPA. 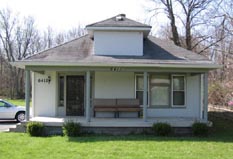 RLUIPA, the Religious Land Use and Institutionalized Persons Act of 2000, forbids a local government to "impose or implement a land use regulation in a manner that . . . . treats a religious assembly or institution on less than equal terms with a nonreligious assembly or institution." Since comparable secular uses within that zoning area, such as senior citizen centers, assembly halls, and civic groups, would not require a zoning variance, neither should a religious use.
David Langdon, an attorney associated with the Alliance Defense Fund, handled the church's legal appeals. He contended that the city's actions violate the Constitution because they do not require nonreligious groups to obtain special permission. "They treat religious uses much more onerously than they treat other very similar uses," he asserts. "For example, any kind of assembly hall or any place where people might gather to discuss politics or [hold a meeting such as] Kiwanis, [are] permitted to meet in most places in the city," Langdon explains. "Whereas a church, no matter where it is – whether it's a residential district, a commercial district, anywhere in the city – they have to get special permission."
The Lord must have been waiting for this one. In His great wisdom, the case came before none other than Sarah Evans Barker, Chief Federal Judge of the Southern District, Indianapolis – the same judge whose ruling against the Indianapolis Baptist Temple resulted in the 2001 seizure of the church. Barker refused to halt enforcement of the zoning ordinance, basing her decision in part on her contention that allowing a church to locate in that zoning area could therefore interfere with other land uses - specifically, if a liquor or pornography establishment decided to take up residence within 200 feet of the Westside Baptist Church.
She also relied – erroneously, according to the Circuit Court of Appeals – on a court case called Civil Liberties for Urban Believers (“CLUB”) v City of Chicago. Digrugilliers noted that "this case does not apply, because the city of Chicago required everyone – secular or religious – to get a variance. In our case, Indianapolis only required a religious variance."
Digrugilliers appealed to the U.S. Circuit Court of Appeals. "The fact of the matter is," he emphasized, "that the City of Indianapolis did discriminate against our Church on the grounds of religious content and speech."
An unexpected ally showed up when the Civil Rights Division of the U.S. Justice Department filed an Amicus ("friend of the court") brief in April 2007, arguing that Indianapolis had violated the RLUIPA by refusing to permit religious assemblies in a commercial area while allowing similar secular uses. The Justice Department stated, "The District court erroneously concluded that the Church's RLUIPA and Constitutional claims were identical and the District Court erred when it concluded that the zoning ordinances treated religious groups on equal terms with non-religious groups." They further stated that the denial of the Preliminary Injunction should be vacated by Judge Barker.
The Biblical Law Center (BLC), founded by Al Cunningham, worked with David Langdon's law firm handling this case in Indianapolis. "The BLC was consulted regularly and made known the fact that the caption on the case was wrong," commented Barbara Ketay, BLC's Legal Associate. "There was a Declaration of Trust in place, and the caption on the case had to reflect Pastor Digrugillier’s position pursuant to the Declaration. It was amended and filed, and the position of the Pastor before the Court was perfected."
When the church's lease came up for renewal, Judge Barker noticed that the lease did not reflect the Declaration of Trust, and ordered that it be drawn according to the parameters set forth in the Declaration. In the Indianapolis Baptist Temple case in 2002, Barker totally ignored the Declaration of Trust of the IBT, ruling in favor of the government. In this case, the same judge was made to recognize the importance of the very Declaration of Trust that she had ignored in the IBT case.
The Circuit Court did not merely make a favorable ruling, but actually sent Barker's ruling back to her court for reversal.
As a result of the court case, Indianapolis changed the ordinance to comply with RLUIPA and removed the onerous restrictions for religious use. Another concern for Westside was parking restrictions, but a city councilman came to their aid and threw those restrictions out of the ordinance as well.

Throughout their ordeal, the congregation continued to meet at the church building. "Our landlords have been wonderful," said Digrugilliers. "During the winter months, they reduced our rent so we could stay."
"This ruling is beneficial to anyone that's in a similarly zoned area," noted Digrugilliers. "When churches realize the far-reaching implications of this, they can go back and force their local governments to rescind the requirements for a zoning variance."
As for the little church known as the Baptist Church of the Westside, the case confirmed what they knew all along: “God is good. All the time.”
If you want the quarterly Trumpet Newsletter (the voice of the unregistered church movement) Greg Dixon Editor - send your e mail address to: drgregdixon@earthlink.net