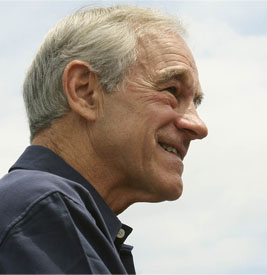 Dr. No!
by Ron Paul
Last week, GOP chairman Michael Steele came under fire for daring to say what a lot of Americans already know – that our involvement in Afghanistan is an ill-advised quagmire with no end in sight.  After nearly 10 years and approaching $1 trillion spent, the conflict is going nowhere because there is nowhere for it to go.  After all, if victory is never really defined, defeat is inevitable.

With our economy at home in serious trouble, this wasteful occupation is something we clearly cannot afford.  Each soldier costs us $1 million per year, and yet most in Washington are only considering how many more soldiers to send.  Fuel costs an astonishing $400 per gallon for our military in Afghanistan!  Yet somehow, many politicians feel it is acceptable to squeeze this money out of our taxpayers, who are truly struggling economically, to fund this non-war.   Our economy here is not showing any real signs of improvement.  Official unemployment is pushing 10% and getting worse.  (Real unemployment is over 20% according to the free-market economists)  The growing debt and inflation used to fund this occupation only dooms us to more economic hardship for a long time to come.  And - for what?

Where the money for Afghanistan comes from is one problem – where it goes is another.  Recently, it has come to light that much of the aid money we send to Afghanistan is lost due to corruption.  Billions of tax dollars from hardworking Americans are ending up lining the pockets of corrupt Afghan officials, and likely even filtering into the Taliban we are ostensibly fighting.  The Wall Street Journal recently reported that curiously enough, billions more than the Afghan government collects in revenue is leaving the country in the form of cash on huge pallets and in suitcases and mostly ending up in Dubai, as well-connected Afghan officials buy up luxury homes and enrich their personal off-shore bank accounts.  Investigations into corruption and graft have been blocked by the Karzai government, probably because Karzai’s own brother would have to be implicated.  It is encouraging that the foreign aid appropriations subcommittee has attempted to block billions in aid as a response to these allegations, but this is likely temporary and may not even succeed.

The point is that sending aid money to Afghanistan is not making poor people over there better off.  It is making poor people here worse off.  Corruption is endemic to Afghanistan, with graft comprising about one fourth of their economy!  Even though it is considered the second most corrupt nation in the world according to Transparency International, we still send the Afghan government billions of dollars in aid and are shocked to find it is not making its way out of the sticky fingers of the officials entrusted with it.

Robbing citizens here to fund corruption over there is not helping average citizens anywhere.  We are sacrificing real economic opportunities at home for the opportunity to line corrupt pockets in Afghanistan.  Not only that, but American soldiers are being killed and maimed.  It is tragic and frustrating how much we have lost and wasted already.  It is time to leave Afghanistan to the Afghans to sort out.  I am glad more Americans are finally willing to face this reality.
source