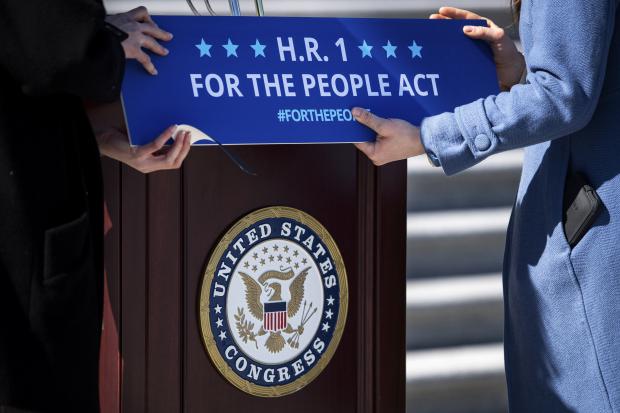 It's common practice for much congressional legislation.

On Wednesday, majority House Dems passed so-called HR 1 — For the People Act of 2021.

There's nothing remotely democratic about their hostile to peace, equity, justice, and the rule of law agenda.

They stole Election 2020 and likely have more of the same in mind ahead.

It died in the GOP controlled Senate, perhaps facing a repeat defeat ahead.

Pelosi's dark hands are pushing the measure opposed by the ACLU. See below.

Any measure 791 pages in length contains provisions to oppose, not support.

Few if any congressional members read the measure and other overly lengthy ones they vote up or down on anyway.

According to Pelosi, "(e)verything is at stake (sic). We must win this race, this fight (sic)."

"At the same time as we are gathering here to honor our democracy (sic), across the country over 200 bills are being put together, provisions are being put forward to suppress the vote (sic)."

She and other undemocratic Dems know all about voter suppression and related dirty tricks.

There's nothing remotely democratic about a notion they abhor.

Former congressman Ron Paul called the measure "one of the most dangerous bills for both election integrity and free speech that I have ever seen."

HR 1 "is an attempt by the absolute worst of the Washington, DC statists to take over your state and local elections, while they institutionalize seriously questionable practices like universal mail-in and early voting."

"Pelosi sponsored HR 1, a bill designed to allow her party to take over elections, and she did it as soon as she retook the speaker's gavel."

"Making it illegal to clean out voter rolls of deceased or non-residents."

"Forcing states to allow vote-by-mail, which is fraught with opportunities to commit fraud."

"Forcing taxpayers to subsidize candidates they don't align with politically, and

"They also fear any dissenters to their agenda, because it's so unpopular among the general public, they know they must crush any dissent at the same time."

The ACLU said the following about HR 1.

It supports provisions that "strengthen federal protections for the right to vote."

Other provisions are unacceptable.

They "unconstitutionally burden the speech and associational rights of many public interest organizations and American citizens."

"These provisions will chill speech essential to our public discourse and would do little to serve the public's legitimate interest in knowing who is providing substantial support for candidates' elections."

In its current form, the ACLU opposes HR 1.

It should be split into a number of measures to be considered separately.

The ACLU supports legislation that strengthens the democratic process — opposing what goes the other way.

The ACLU urged congressional members "to vote 'no' on passage of the bill" in its current form.

House members passed what an evenly divided Senate can defeat by use of the filibuster that requires a 60% majority to end debate.