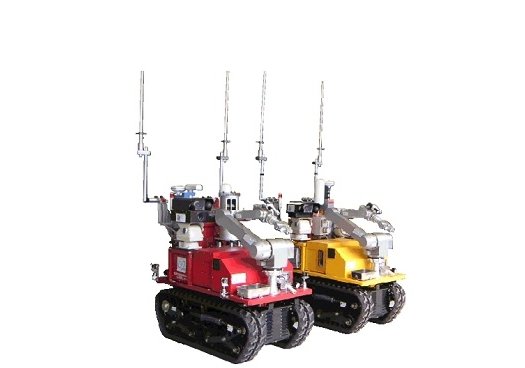 Finally, some news that Japan is actually using its rescue robots. The red Wall-E-esque ‘bot seen here is on the scene at the Fukushima Daiichi nuclear plant, according to a media report from Japan.
Japan has a suite of earthquake rescue robots, but so far, there has been scant evidence of their use in this disaster. This monitoring robot, AKA Monirobo, could be the first robot confirmed to be helping humans cope with the nuclear emergency. But its role is not even clear, as a Reuters story explains.
The Japanese newspaper Asahi Shimbun (in Japanese) reports that a red Monirobo has been dispatched to the nuclear plant, on loan from the Nuclear Safety Technology Center. The red one is equipped to detect radiation levels at the crippled reactors. A yellow one, which will collect dust samples and monitor flammable gas, is expected to be deployed in the next few days.

The 5-foot, 1,300-pound Monirobo has a robotic arm for collecting samples and moving obstacles, and it drives using a pair of treads. It is designed to go where humans can’t, using a radiation detector, four video cameras with 3-D capability, and temperature and humidity sensors.

Along with Monirobo, a host of other robots are mobilizing to help with recovery efforts and damage assessment. At least four teams are ready to deploy ground robots, snake robots and underwater robots, according to IEEE Spectrum. One team will inspect some underwater infrastructure in Kajima, in the Chiba Prefecture east of Tokyo, and another will go to Hachinohe, Aomori Prefecture, to check out a building with a collapsed ceiling. Click through to IEEE's Automaton blog for a roundup.

Meanwhile, France — which is dependent on nuclear power for almost three-fourths of its energy — is sending radiation detectors, 2 tons of boron and its own robots to help in the cleanup and recovery efforts. It seems odd that Japan, with its robot fascination, should rely on a European nation for robot assistants.

According to Reuters, a science ministry official said a Monirobo was there, but a nuclear safety agency official said he had no reports of any robots being used.

Let’s hope it is, and that it can relieve the cadre of workers who are exposed to dangerous radiation levels inside the plant.

Jim Stone's main laptop and tablet get hacked after he exposed how Stuxnet...

The media can no longer hide the truth about Fukushima; the entire world is in danger