> When Humans Bully Robots, There Will Be Consequences - Freedoms Phoenix 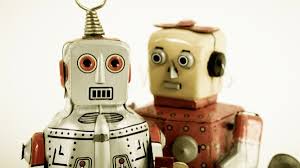 Allusions to dystopian futures with robotic overlords are pretty hard to overlook. Just last week, a tragic accident where a young worker in Germany was killed by an industrial robot spurred cries of killer bots, and scientist Stephen Hawking and tech entrepreneur Elon Musk have long warned of the dangers of a robot apocalypse.

But we rarely turn the tables and think of what would happen if we humans subjected our robotic minions to abuse. Could it be that some of our robots might actually become mechanical victims—subject to human vandalism and bullying? What would this mean for us when we introduce carebots, garbage collector bots, or assistant teacher bots into our societies at large?

Back in 2010, Pericle Salvini, a researcher at the Scuola Superiore Sant'Anna in Pisa, co-authored a conference paper entitled "How safe are service robots in urban environments? Bullying a robot."

In this paper, Salvini coined the phrase "robot bullysm," which refers to any kind of abusive behaviour that might prevent a robot from carrying out its task. Salvini told me that, back then, the robotics community didn't really take him seriously. But now, given the increase of autonomous cars and drones, he asserted the importance of rediscussing the subject.

"If vandalised, a moving object is much more dangerous than a fixed object like a phone box."

Salvini said that if we're game to vandalise static objects, we're probably open to targeting moving ones too. And he argued that "bullied" or vandalised robots could inadvertently pose a greater threat to humans.

"A phone box is often an object of vandalism—a robot is something that moves and can bring stuff. If vandalised, a moving object is much more dangerous than a fixed object like a phone box," he explained in an email. "Consider how anybody with a stick or spray would be able to sabotage a robot's functioning [...] If it's not programmed to manage this problem it may hurt something or somebody."

The Robots Are Coming, And They Are Going To Take Over Millions Of Jobs

Make No Mistake: Military Robots Are Not There to Preserve Human Life...

Samsung Neon: Here's when we'll get details on the mysterious AI

It Will Probably Happen This Year

Google and Amazon are now in the oil business

As robots take over warehousing, workers pushed to adapt