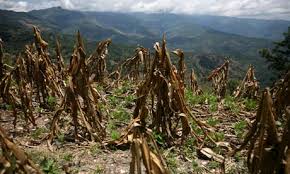 Climate change is outpacing scientists' ability to develop new crops capable of coping with the warming conditions, and unless action is taken quickly to speed up the introduction of improved grains, yields will significantly decrease over the next decade, a new study warns.

Professor Andy Challinor of the Priestley International Centre for Climate at the University of Leeds and his colleagues reported Monday in the journal Nature Climate Change, it typically takes between 10 and 30 years to breed and adopt a new crop variety.

In the meantime, the temperatures across the tropics have been steadily increasing, meaning that by the time the crop is ready for planting, it ends up growing in conditions far warmer than it was originally developed in. Based on available farming data and other information, the study authors devised best and worst case scenarios for current crop breeding systems.

They found that crop duration could become significantly shortened in as little as two years time in some parts of the world, and within the next 15 years in the majority of corn-growing regions of Africa, according to BBC News. Only the most optimistic scenarios allow for crop development to keep pace with climate change through 2050.

"The actual changes in yield may be different but this effect is there, the impact of this change in duration will occur unless breeding changes," Challinor explained to the UK media outlet. "The durations will be shorter than what they were bred for – by the time they are in the field they are, in terms of temperature, out of date."

Crops in Africa will be the first to be hit by climate change. Credit: (Francesco Fiondella/International Research Institute for Climate and Society)

Identifying the problem and searching for a solution

While Challinor's team focused on African-based corn production, they said that the underlying processes affecting that industry are applicable to crop growth throughout the tropics. Gradually rising temperatures and increased drought and heatwave frequency will shorten the time between planting and harvesting, resulting in fewer crops, they said in a statement.

Why does it typically take at least 10 years for newly-developed crops to be ready to be planted by farmers? The authors told BBC News that it is due in part to the limited number of crops that required government testing and market access restrictions. While they noted that it is important to speed up development, they also said scientists need to do a better job of predicting the future climate conditions when working on their new crop types.

Don't Just Blame The Greenies For The Crisis: 'It's Central Economic Planning, Stupid!**

Study Disputes That Earth Is in a 'Climate Emergency'

Greta Thunberg admits to being a puppet, is now under investigation for collusion and conspiracy