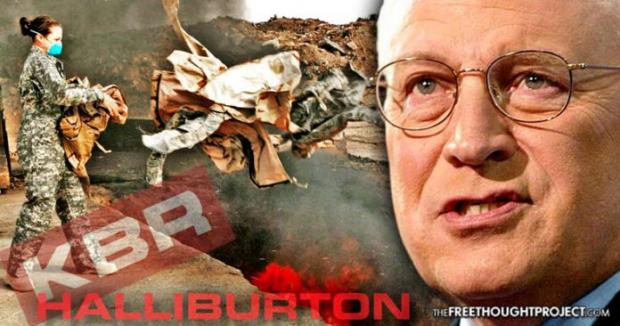 The families of suffering and dying Iraqi veterans, who breathed in toxic fumes because of the negligence of military contractors, received some horrible news this week. A federal judge in Maryland just dismissed a massive collection of cases brought against the contractor who claimed that the open burn pits in Iraq left them sick and dying from serious illnesses.

The legacy of death and misery from the invasions of Iraq and Afghanistan continues today, and, once again, Dick Cheney plays a central role. The company at the center of the myriad of lawsuits is the infamous government contractor, Kellog, Brown, and Root (KBR).

KBR, which was a part of Dick Cheney's corporate empire under Halliburton at the time, operated about 250 burn pits which contributed to the $40 billion that Halliburton made during the Iraq occupation. "Every type of waste imaginable" was burned, including "tires, lithium batteries, asbestos insulation, pesticide containers, Styrofoam, metals, paints, plastic, medical waste and even human corpses."

The families have been seeking compensation for the deaths and suffering of their loved ones since 2009 and this week a federal judge crushed their hopes.