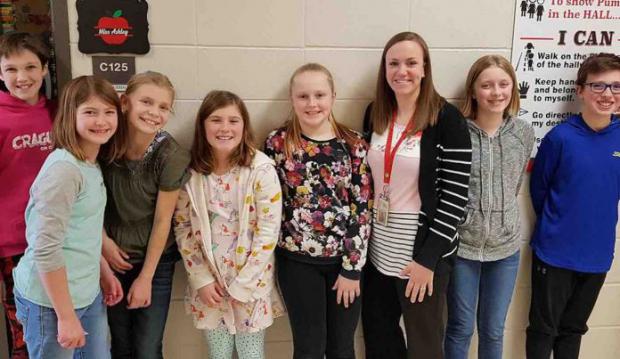 Kindness is seeping into the classrooms and corridors of an elementary school in Minnesota thanks to a group of fifth-graders.

The kids at Parker Elementary School started a Kindness Club last year, and observers say it's having a positive impact on classroom culture.

"There had been some issues in fifth grade of kids not being very kind to each other," said Ashley Justen, a social worker at the school in Elk River. Teachers had talked to some of the students and told them things had to change because 'that's not how you treat people,' Justen said.

Fifth-grade teacher Matt Greenhoe said he had been talking with his students one day about improving the situation when one of the kids, Ady Bollinger, suggested starting the Kindness Club.

Since then the Kindness Club has blossomed, sprinkling kindness throughout the school.

Ady said they started the club because they want kids at Parker to feel safe in school. They also want to stop bullying and improve self-esteem, she said.

Miscarriages skyrocket 366% in six weeks due to Covid vaccines

A Child of the Apocalypse

'Alpha generation' will have fewer artists, musicians -- and digital devices may be to blame

MOMS FIGHT BACK AGAINST 'NEW NORMAL'

Pure Evil: The Boys and Girls Being Sold for Sex During COVID-19 and the Super Bowl