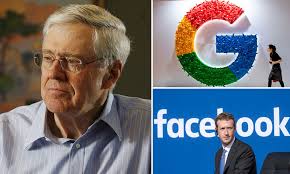 The Koch family is launching an ad campaign defending Silicon Valley giants like Google and Facebook from antitrust probes led by attorneys general.

Americans for Prosperity, the conservative group backed by the Republican billionaire family, will release ads over the next two weeks calling on people to urge their state attorneys generals not to go after the large tech companies.

The group asks that the attorneys general not turn their investigation into a 'political spectacle'.

They will run on Facebook over the next two weeks.

Texas Attorney General Ken Paxton formally announced the antitrust investigation into Google's 'potential monopolistic behavior' as they examine whether the Silicon Valley tech giant has gotten too big and effective at stomping or acquiring rivals.