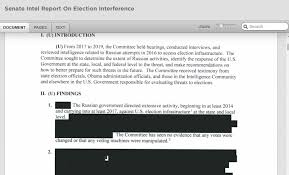 After the 2016 presidential election, accusations of foreign interference ran rampant. This, paired with President Trump's surprise victory, caused social media outlets to crack down on "fake news." And now, one major social media outlet has caused outrage among employees with a policy that allows paid advertisements by politicians to be completely exempt from "fact-checking."

But before we get into that, let's take a moment to look back at previous discussions of election interference.

Did the Russians change the outcome of the 2016 election?

A hearing in the Senate lasting for 2 years found that the "Russian government directed extensive activity…against the US election infrastructure." However, the redacted report also says that the Senate Committee found "no evidence that any votes were changed or any voting machines were manipulated." You can read the full (redacted) report here.

Despite the fact that this doesn't seem to have had any effect on the outcome of the last election, the mainstream media still to this day claims that Russia is the cause of all our problems. Here's one example from May of 2019:

AS LAWMAKERS, STATE elections officials and social media executives work to limit intervention in the 2020 elections by Russia and other foreign operatives, an unsettling truth is emerging.

Putin Calls For A New System Guided By UN Charter... But Is It Possible?