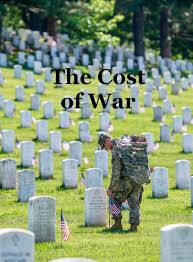 "The collapse of the Libyan state has had region-wide repercussions, with flows of people and weapons destabilizing other countries throughout North Africa." This statement came from the Soufan Group's recent Intelbrief, entitled "Fighting Over Access to Libya's Energy Supplies" (24 January 2020).

Are you listening, Barack Obama?

"There's a bias in this town [Washington, DC] toward war," President Obama said to me and several others assembled in the White House's Roosevelt Room on September 10, 2015, almost seven years into his presidency. At the time, I thought he was thinking particularly of the tragic mistake he made by joining the intervention in Libya in 2011, ostensibly implementing United Nations Security Council Resolution 1973.

Obama's secretary of state, John Kerry, was sitting right beside the president as Obama spoke. I recall asking myself at the time if he were lecturing Kerry as well as lamenting his own decision, because Kerry had been rather outspoken at the time about heavier U.S. participation in yet another endless war then — and still — transpiring in Syria. Obama however, was apparently having none of that.

The reason is that the Libya intervention not only lead to the grisly death of Libya's leader, Muammar Qaddafi — and set in motion a brutal and continuing military conquest for the title of "who rules Libya," invite outside powers from all over the Mediterranean to join the fray, and unleash a destabilizing refugee flow across that inner sea — it also put the weaponry from one of the world's largest arms caches into the hands of such groups as ISIS, al-Qa'ida, Lashkar e-Taibi, and others. Additionally, many of those formerly Libyan weapons were being used in Syria at that very moment.

Before we offer faint praise for Obama having learned his lesson and thus not deciding to intervene in Syria in a more significant manner, we need to pose the question: Why do presidents make such disastrous decisions like Iraq, Libya, Somalia, Afghanistan and, tomorrow perhaps, Iran?

President Dwight Eisenhower answered this question, in large part, in 1961: "We must never let the weight of this combination [the military-industrial complex] endanger our liberties or democratic processes. … Only an alert and knowledgeable citizenry can compel the proper meshing of the huge industrial and military machinery of defense with our peaceful methods and goals."

US Deploys Patriot Missiles in Iraq Bases Hosting US Troops