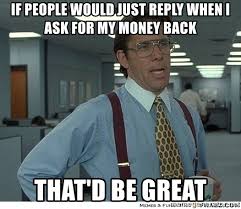 Though said funds have long been spent by most of the cash-strapped individuals who received them, state governments are demanding that excess unemployment aid they erroneously distributed somehow be paid back, or else.

In some cases, states are having to cut current benefits to unemployment recipients in order to make up for the losses. In others, those who received overpayments are simply being told that they need to come up with the missing cash as soon as possible.

Strangely, many of those who were overpaid had no idea that the amounts printed on the checks were wrong. Because it took quite a while for many of them to even start receiving their benefits, the assumption was that the extra dollar amounts were back payments to make up for the government's failure to get the checks out more promptly.

In one case reported by The Wall Street Journal, a woman named Autumn Stull, who owns a maternity and children's consignment store in Golden, Colo., was told that she owed the state of Colorado nearly $9,000 in overpayments that she received from the state while her business was closed.

Stull had taken advantage of the Pandemic Unemployment Assistance Program, which in Colorado allows for self-employed individuals to collect aid. Several weeks after reopening her business in May, Stull received a notice about the overpayments and was horrified.

"Your heart skips a beat. Your stomach sinks. Your eyes get teary," she recalls about her reaction upon receiving the notice. "The money is gone. I used it. We've been through enough."