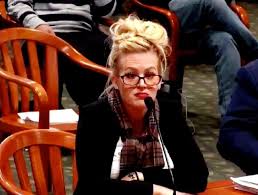 When asked why more people haven't come forward to report fraud, she replied:

The Democrats, I'm sure, were just doing their best to protect polite society from Rude Intolerant Rulers, without necessarily realizing that they had become the rude intolerant rulers they were trying to stop. It's a means to an end.

The thing about harassment and bullying though, is that the more people see whistleblowers come forward, the more they will speak out. The trickle can become a flood.

Imagine if whistleblowers were being given time to speak their minds in most of the media?