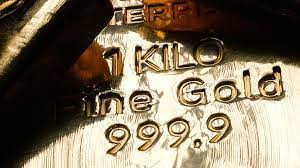 The Federal Reserve wrapped up another meeting without making any changes to its current extraordinary, loose, inflationary monetary policy. But the central bank did hint that it may start tapering its quantitative easing program "soon."

That was enough for the markets. They continue to expect the Fed will tighten monetary policy and fight surging inflation. Gold sold off after the FOMC statement came out, dropping about $10.

But as we have said over and over again, the Fed cannot possibly tighten in this economic environment. In an interview on RT Boom Bust, Peter Schiff said even if the Fed does begin to taper, it will eventually reverse course and ultimately expand QE.

It knows the only foundation this bubble economy has is the Fed's easy money policies. And I don't think they have any actual plans to taper. And even if they just kind of feign the process by beginning it, they'll never complete it because soon after they start the taper, again, if they even ever start, they're going to have to reverse the process. Because ultimately, the Fed Fed is going to expand the QE program and start to buy a lot more government Treasuries and mortgage-backed securities in the future than it's doing right now."