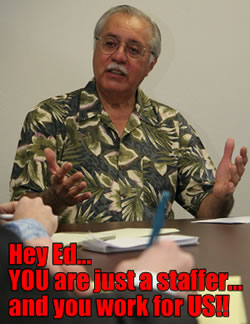 Your practice of shielding yourself from accountability by hiding behind low-level staffers is unacceptable. I have had numerous experiences reaching staff members who were unfamiliar with the legislation being passed, unable to define specific terms within the bills, and unable to explain the political theories behind them. This would be OK, if I were able to resolve any impasse in communication by simply asking to speak with you, my Representative. However, I have been frustrated in my attempts to do so.

When I request to speak with you, I am met with obstructionism and hostility. It appears that staff member have been trained to simplify all concerns by constituents into "supporters" and "nonsupporters", with no further attempt at nuance. I'm sure you understand, legislation that is many thousands of pages in length, cannot be boiled down to a simple "yes" or "no" answer, since they contain more than one issue within them.

In desperation for access to representation, in some cases I have acquiesced to explain my issue to these staff members, only to find that my time has been wasted when I received a form letter from your office in response that does not address any of the concerns that I voiced. As an intelligent, informed, and active community member, this is insulting at the least, and at worst it is a direct violation of the letter and the spirit of our Constitution.

When I phoned your home office, thinking I could catch you when you were in town, it was even worse. I was told I would have to make a "request", and then would only be able to see a staffer. In response to this I have to say, first of all, it's not a "request" because you have no authority to refuse, and second of all, a meeting with a staffer does nothing to resolve the underlying issue that these people are unqualified and unelected. They AREN'T my representative, they don't know what they're talking about, and I don't have to accept them as a substitute.

At this time it appears that I am being taxated without representation, and further denied my right to petition for redress of grievances. Therefore I ask, by what authority (Quo Warranto) do you refuse to speak with constituents, and deliberately avoid all direct communications?

4 Comments in Response to Open Letter to Ed Pastor

The letter from Mike Shipley is, to put it mildly,  discouraging for those of us who have, up until recently, had some respect and confidence in our representative form of government. So many of us forget that WE ARE THE GOVERNMENT while these people such as Mr. Pastor are merely those chosen to represent us.  Unfortunately, these "representatives" have also forgotten this and feel that they are "the government".  As a result, long ago our votes became meaningless and our voices smothered.

Politics and partisanship have always been a nasty game, but now the Republicans have made trash of our system of government to an extent never seen before.  People are now so discouraged that there is no longer a grain of trust in what we can do about it - even as far as wishing to correspond to those who are supposed to represent us.

So what's to be done about it?  There is only one thing that I can think of and that's to do our best to TURN THE RASCALS OUT.   Don't fail to vote! VOTE AGAINST THEM!

If there is one thing we can do, it's push for term limits. How?  Good question.

Ed will never be available to meet with you because he is (1) too busy hanging out at the border cutting holes in the fence and (2) too busy to return calls because he is "out to lunch" with the bonus thieves from AIG. Isn't it time we declared the CFR to be a traitorous organization and place its members on a traitor's watch list?

Ed Pastor is a sellout and always will be!

Ed Pastor is a rotten, Council on Foreign Relations/New World Order communist scumbag. He is complicit in all of the bailouts and destruction of the American economy. He would gladly disarm you and tax you into abject slavery.

Hunter S. Thompson said - "Some people will say that words like scum and rotten are wrong for Objective Journalism — which is true, but they miss the point."

What he meant was that words like 'rotten' or 'scum' are accurate descriptive words for some people; in other words, the truth is the truth regardless of the terminology used.

He should be arrested and tried for High Treason as a traitor to We the People of the United States of America.