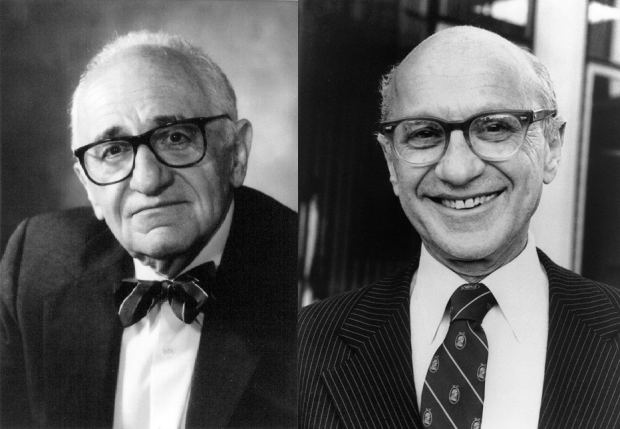 David Stockman's 742-page "The Great Deformation", was being discussed on a thread of a discussion list I occationally participate in and I asked if I could forward to our readers the first hand experiences of a friend of both Murray Rothbard and Milton Friedman. David Stockman's book is very critical of many people that he felt shared some responsibility for how we got into this financial mess and was critical of Milton Friedman. This prompted a discussion of how it was that Milton Friedman and Murray Rothbard feuded so much but shared many supporters.
(A little background on the book and David Stockman)

LewRockwell.com
“In The Great Deformation, David Stockman – former US congressman and budget director under Ronald Reagan – tells the story of the recent crisis, and takes direct aim at the conventional wisdom that credits government policy and Ben Bernanke with rescuing Americans from another Great Depression. In this he has made a seminal contribution. But he does much more than this. He offers a sweeping, revisionist account of US economic history from the New Deal to the present. He refutes widely held myths about the Reagan years and the demise of the Soviet Union. He covers the growth and expansion of the warfare state. He shows precisely how the Fed enriches the powerful and shelters them from free markets. He demonstrates the flimsiness of the present so-called recovery. Above all, he shows that attempts to blame our economic problems on "capitalism" are preposterous, and reveal a complete lack of understanding of how the economy has been deformed over the past several decades…Thanks to The Great Deformation, not a shred of the regime’s propaganda is left standing. This is truly the book we have been waiting for, and we owe David Stockman a great debt.”
(The story I thought that you would like to read)
From: Bill Sumner

Some of you might be interested in a response I sent to a friend in California who has only loosely followed the scholarly battles within the ranks of the pro-freedom “good guys.”  These good guys may all be on the same side, fighting for personal freedom and free markets, but you’d never know it if you read how vehemently they attack each other’s scholarship and beliefs.  Put simply, they strongly disagree on how best to bring freedom to the world..  My friend asked about a blast against Milton Friedman on one of my favoritre websites, www.lewrockwell.com., which ties into the Stockman article.

Lew Rockwell and Murray Rothbard were close friends and allies.  I became a good friend of each when Lew moved his Ludwig von Mises Institute to Burlingame., California.  (It’s now at Auburn Univ. in Alabama.)   Murray spent lots of time there, when he wasn’t teaching economics at Brooklyn Polytechnic Institute (now Polytechnic Institute of New York University).   Murray was (I believe) the leading American exponent of the Austrian school of economic thinking, and very much in tune with the works of Carl Menger, Eugen von Bohm-Bawerk, Ludwig von Mises, Friedrich von Hayek, etc.  I think the remarkably successful coin dealer, Burt Blumert, was the magnet that attracted them to the San Francisco Peninsula.  Burt gave generously to libertarian causes, and moved The Center for Libertarian Studies to his place of business in Burlingame.

The article below comes from Lew Rockwell’s website, and reflects Lew’s dedication to the Austrian School of economics.  Milton Friedman was a monetarist, not an Austrian.   (You can see the stage being set for a battle between scholars.)  Milton certainly let loose on theories of fellow academics with whom he disagreed, but generally kept ad hominum attacks to a minimum.  On the other hand, Murray Rothbard could really let loose with infantry, armor, artillery and air power, on those scholars who crossed him, or his work.

Actually, Murray didn’t restrict his denunciations to fellow faculty mavens.  After Murray broke with Charles Koch in the mid-1980s (I think it was because Charles stopped financing Inquiry magazine), the Rothbard-Rockwell report (a monthly newsletter) spent a lot of ink blasting Charles for all sorts of things.  At the time, I agreed with Charles that Inquiry wasn’t something I thought worthwhile supporting.  Murray wanted to use it as a way of appealing to the campus left, in an attempt to convince leftists that they, and libertarians, had much in common, as far as opposing both the Republican and Democratic party establishments.  I recall a cover story in Inquiry, with a picture of Ayatollah Khomeini on the cover.  Khomeini was portrayed a the good guy, and the Shah of Iran as the bad guy.  This nonsense was clearly aimed at telling the campus left (for whom the Shah was the devil incarnate) that libertarians were standing with them, at least on one issue.

I once asked Milton why he and Murray, both of whom shared strong free market principles, blasted each other’s work.  He said that Murray had published scholarly material on the Great Depression that contained some totally erroneous monetary statistics, and that he (Milton) had pointed out this short-coming in blunt terms.  Needless to say, Murray disagreed, and took great offense.

As I indicated, Murray (God rest his soul) was an aggressive attacker of all who disagreed with him.  Once, in the wee hours of the morning, after a long argument (on a subject lost to memory), and the generous consumption of adult beverages ( I had a strong liver once) I asked him why he was so nice and polite to me, when he was so sharp and intemperate in attacking scholars with whom he disagreed.   He said, “You’re a civilian.  If you were an academic, I’d rip you to shreds!!

This background might be useful in evaluating the attack on Friedman’s free market credentials.