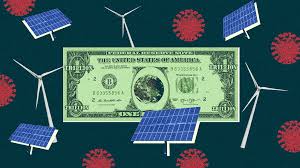 Congressional Republicans and Dems, together with the White House, agreed on a reported $2 trillion stimulus plan late Tuesday night — the text of the bill not finalized.

The devil is in the fine print and how what's agreed on is implemented.

The plan will inject less than the reported $2 trillion into the US economy (see below), aimed mainly at helping monied interests.

It's notably on top of over $6 trillion in virtually free Fed helicopter money for Wall Street, other corporate interests, hedge funds, and large investors.

Around $500 billion is earmarked for large corporations, $367 billion for undefined small business, $130 billion for hospitals, $150 billion for state and local governments, enhanced unemployment insurance, and one-time payments of $1,200 to US households with annual income of $75,000 or less, $2,400 for married couples, as well as $500 per child up to a maximum of two.

Households with incomes from $75,000 to $99,000 will get incrementally less, nothing for incomes above the top threshold.

Enhanced unemployment benefits are only for four months, total benefits for business and households around $1.65 trillion, not $2 trillion — when sustained government help is needed as long as dire economic and public health conditions persist.

Households with little or no tax liabilities will receive the same amount.

Given the high cost of living in the US, especially for urban dwellers, this amount with only help low-income or unemployed Americans short-term at a time of economic crisis and a national health emergency likely to continue for months or longer.

Trump's aim for US business as usual to resume around mid-April ignores the reality of mounting COVID-19 infections and deaths — around 55,000 and nearly 800 respectively in the US, numbers steadily rising.

The larger these numbers, the more greatly they can expand exponentially — why it's vital to shelter in place as much as possible and social distance when outside for essential activities until the threat of COVID-19 is eliminated.

By mid-April, the numbers of infected individuals and deaths will likely be much higher than now.

US states, cities, and towns recommended or mandated lockdowns, shelter-in-place orders, and/or social distancing when in public — cordon sanitaire protections against spreading disease.

If current policies in place don't work, tougher measures will be needed, including a possible national lockdown by presidential executive order or congressional legislation — even though no constitutional provision permits this action.

Earlier federal legislation overrode state rights by mandating civil and voting rights — though way short of what provisions of both measures called for.

"Maximization of the income that can be delivered through existing social insurance and safety net programs during the lockdown and its aftermath.

Bailouts of industries' workers, not shareholders, creditors, or senior management.

EPI expanded on the above actions as follows:

Unemployment insurance should be expanded in "vast amounts" for laid off workers.

An array of social benefits should be instituted for US households in need, stressing:

"(T)here's no reason why…benefits should be…less than" a steady flow of funds to US households needing help.

Mass layoffs and economic contraction are increasing, to what extent and for how long unknown.

EPI: "Economic activity will fall more sharply than in perhaps any other period in modern history, and tens of millions of US employees will be forced to stop working."

At a time of economic shutdown, it's the responsibility of government to fill the void — largely at the federal level, at state and local levels as well to the extent they're able.

There's no excuse for the world's richest country not going all out for all its people — its unemployed, underemployed, and low-income households most of all, including hundreds of thousands of homeless and millions of food insecure households.

Key economically is enhancing social safety net programs, mostly to ensure everyone needing healthcare, food, and other essentials have access to it — no one in need left out.

Fundamental reforms of US economic policy should be implemented and "sustained beyond this crisis," said EPI.

State and local governments are "on the front lines" of securing public health — why they "must be empowered to spend as freely as public health demands."

Industry bailouts should be directed toward protecting jobs and wages for workers, not "shareholders' wealth, creditors' debt, or senior management salaries."

Firms getting government handouts "must not be permitted to lay off workers, outsource or offshore work, cut workers' pay or benefits, or reopen union contracts."

What's going on is unprecedented in US history, the same true in other countries.

EPI called for "a wraparound insurance policy to make sure that all households get at least some relief and that low-wage workers receive enough to live on during the enforced economic shutdown" — through "substantial cash payments to households."

Economic stimulus/recovery measures must be sustained "as long as conditions warrant."

"Cash payments should not be one-time" — what Congress and the White House agreed on, what will only help millions of Americans in need very short-term, way short of what's needed.

Piling on more debt will make an untenable situation worse.

Wipe the slate clean on "mortgage, student, car, (and) credit card" debt. They're too "overwhelming" to be repaid — impossible during protracted economic duress.

Hudson stressed that "if the US government can finance $4.5 trillion in quantitative easing for the banks, it can absorb the cost of forgoing student and other debt," adding:

"And for private lenders, only bad loans need be wiped out. Much of what would be written off are accruals, late charges and penalties on loans gone bad."

Mismanaged companies like airlines, Boeing, and others should be nationalized or permitted to go bankrupt, not bailed out.

Instead of using their cash flow constructively, they directed billions of dollars for stock buybacks to inflate their valuations to bubble levels, their executives profiting hugely.

How bad will things get and for how long ahead? While only the fullness of time will tell, economist Nouriel Roubini's outlook is bleak, saying:

Contraction isn't "V- nor U - nor L-shaped…(I)t looks like a I: a vertical line representing financial markets and the real economy plummeting."

What's happening since mid-February exceeds earlier economic downturns — much of the US and other world economies shutting down in a few weeks.

Combatting things economically, financially, and for public health requires "throw(ing) the kitchen sink of unconventional measures at the crisis" — including helicopter money for US households.

The risk of another Great Depression "worse than the original…is rising by the day," Roubini warned.

Top priority is curtailing the spread of COVID-19 infections and halting them altogether.

As long as the virus forces most people to shelter in place, economic recovery won't be possible.

If all-out public health measures aren't prioritized, no matter the cost, there's risk of exponential increases that could crater economies of the US and other countries catastrophically.