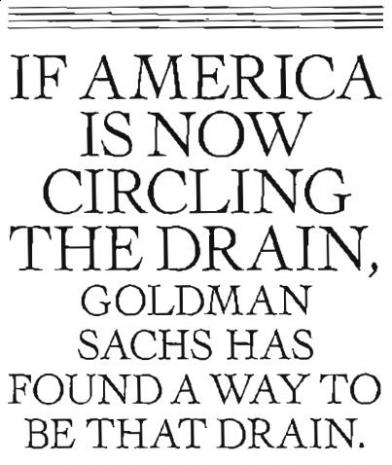 Allegations of investor fraud by Goldman Sachs are adding fuel to a larger controversy that won't be settled in a courtroom. In essence, the question is whether this powerful investment bank is a force for economic good or evil.
The debate isn't new, but it has grown louder in the wake of 2008's massive financial crisis, government bailouts for Goldman and other Wall Street firms, and now the lawsuit by the Securities and Exchange Commission (SEC).

The answer to the good-or-evil question probably isn't a simple one, although some have tried to frame it that way.

Writer Matt Taibbi earned a spot at the forefront of Goldman critics by distilling the case against the firm into a single memorable image. In a Rolling Stone article last summer, he described America's largest investment bank as "a great vampire squid wrapped around the face of humanity," extracting money wherever it can.

Not surprisingly, Goldman Sachs doesn't like this characterization, and has begged to differ.

Go to the firm's website today, as Congress is debating a bill designed to rein in Wall Street, and what you see in large type is the message: "Our Work Enables Growth."

The words are overlayed on an image, not of pinstriped bankers or dollar bills, but of jet airplanes under construction.

So which is it? Is Goldman a breeding ground for speculative booms and busts that have harmed America, as Mr. Taibbi's article asserted? Or does the work of Goldman, along with its banking peers, lay vital foundations for economic growth?

Economists generally dismiss the "all-evil" view of Wall Street. Finance, they argue, plays a vital role in the economy by helping businesses raise funds by borrowing, raising stock, doing merger deals, and the like. And some legal experts say the SEC has an uphill fight ahead if it wants to win against Goldman in court.

Some politicians and Wall Street professionals have voiced suspicion that the timing reflects, at least in part, a calculated effort by Democrats on the SEC to bolster the sense of urgency behind financial regulatory reforms that are nearing a vote in the Senate.

But the lawsuit means the American public is learning about a product that, on its face, is about speculation rather than financing real economic activity. The case is a narrow one, involving whether Goldman provided adequate disclosure to investors about how one 2007 deal was set up.

Rabo: When It Comes To Inflation, What One Does And Doesn't See Is All Political