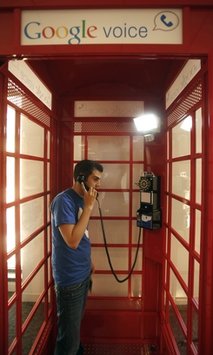 SAN FRANCISCO - Google Inc. is adding a free e-mail feature that may persuade more people to cut the cords on their landline phones.

All calls in the U.S. and Canada will be free through at least the end of the year. That undercuts the most popular PC-to-phone service, Skype, which charges 1.2 cents to 2.1 cents per minute for U.S. calls. It also threatens to overshadow another free PC-to-phone calling service called MagicTalk that was just introduced by VocalTec Communications Ltd.

Skype, Google and many other services have been offering free computer-to-computer calling for years.

Google hopes to make money on its PC-to-phone service by charging 2 cents or more per minute for international calls. The international rates will vary widely, sometimes even within the same country. Google posted a rate chart at https://www.google.com/voice/b/0/rates.

People also will be able to receive calls on their PC if they obtain a free phone number from Google or already have one.

The phone numbers and technology for the new PC-calling service are being provided by Google Voice, a telecommunications hub that the company has been trying to expand. It had been an invitation-only service until two months ago when Google Voice began accepting all number requests.

Google disclosed last year that it had assigned about 1.4 million phone numbers through its voice service, which can field calls made to a person's home, mobile or office number. Craig Walker, a Google product manager who helped develop Voice, said the service has expanded its reach since then, but he wouldn't provide specifics.

Besides planting Voice's technology into Gmail, Google also plans to promote the service by setting up red phone booths at universities and airports scattered across the United States. People will be able to make free calls from the booths to U.S. and Canadian numbers and save on international calls.

Google also plans to enable people to transfer, or "port," their existing home or mobile phone to Voice to widen the service's appeal. Walker said Wednesday that flexibility will be available soon.

The PC-to-phone calling option initially is being offered only to consumers who have accounts on Google's Web-based e-mail, but the company left open the possibility that it will be expanded to the millions of businesses and government agencies that rely on Gmail as part of an applications suite that includes other programs such as word processing.

The added competition comes at an inopportune time for Skype S.A., the Luxembourg-based company that recently filed plans for an initial public offering of stock. Skype has 560 million registered users, including 8.1 million paying customers (most people use the free PC-to-PC service). After four years under the ownership of eBay Inc., Skype was sold to a group of private investors last November for about $2 billion. The company has been doing well since the sale, earning $13 million on revenue of $406 million during the first half of this year.

This has been available since day 1 with google voice. They gave me 10 cents of free credit over a year ago... i still have it.

Not Only Is There Fake News,...There Are Entirely Fake "Journalists" Who Do Not Exist

5G Friend or Foe: CHD's Dafna Tachover at the First Debate with Telecom